US forces are beginning to worry about a new front in the Syrian war as Turkish reinforcements arrive on the border of Kurdish controlled Afrin.

Turkey has been exchanging rocket and artillery fire with the US-backed Kurdish forces in Syria in recent weeks and it now looks like Ankara is looking to expand operations. Turkey has deployed fresh artillery and armored units to the border and has promised to respond to any actions by the People’s Protection Units (YPG) – who they believe are connected to the Kurdistan Workers Party, or PKK. 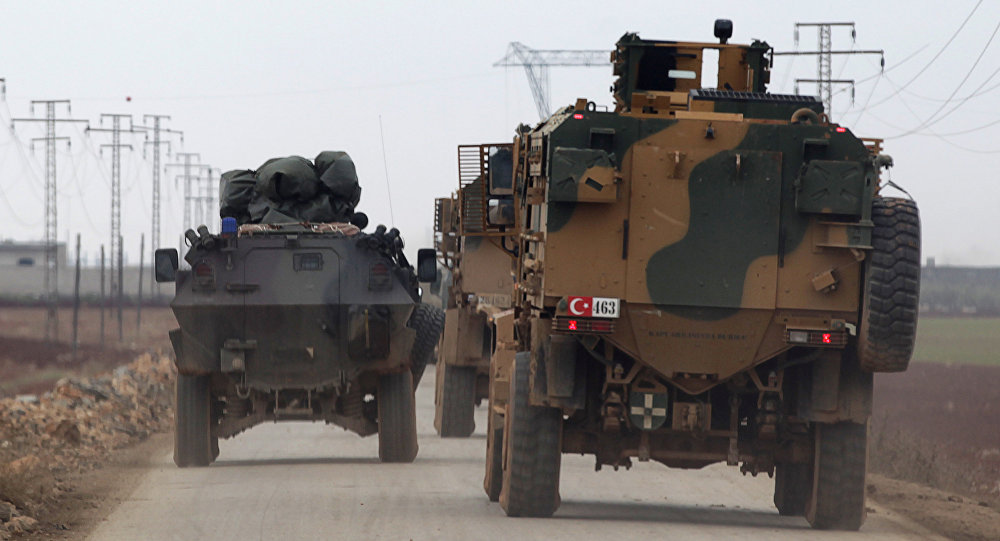 The YPG currently comprises a majority of the US backed coalition known as the Syrian Democratic Forces (SDF), but the group is considered a terrorist organization by the Turkish government. However, NATO doesn’t share this classification of the YPG, and is currently cooperating with them as the main ground force for retaking the “capital” of the Islamic State, Raqqa.

US military leaders are now beginning to show some concern about Turkish movements, especially these latest developments which are suspected to be a part of a push by the military to secure a swathe of territory between the Kilis border region and Idlib, Syria. This is speculated to be part of a larger agreement between Moscow and Ankara for a joint operations to liberate Idlib.

This details of this operation were just speculation until the past few days when statements by the Turkish-backed Syrian opposition spoke with Turkish media outlet TRT World. According to these rebels, they are currently just awaiting an order from Ankara to retake Menagh Airport, Tel Rifat and other villages from the YPG. Turkey and Russia will also both send their own troops to Idlib to act as a buffer between Syrian and opposition forces.

While Russia may not be fully on board with the Turkish ambitions – since the YPG also receives support from Moscow – in Afrin it’s likely that they see this as a lesser problem than the Al Nusra infestation in Idlib. Plus, with Kurds getting more aggressive with their dreams of independence, maybe Moscow is seeking to let the two forces – that both have ambitions that run counter to that of the Syrian government – cut each other down for the time being.

after those criminal erdocunt ottomaian invaders have wiped out the pax americunt invaders and all their proxies.

Never heard of Kurdistan … Somewhere is U$ America I assume as nothing in Syria !

It’s a fiction created by the US and Israel, many archaeologists have proven Kurds history to be full of inaccuracies, not unlike the Israels claims don’t exist. These are just 2 groups of Khazar descendants creating fake histories at the expense of others.

All the countries in South America where a fiction 200 years ago but a reality now. History is a fickle thing my friend

All states in Africa (well, almost) were a fiction just 75 years ago.

All states in the old USSR were fiction just 40 years ago.

Kurds are on their lands for many shousands years.

Many people are on their lands …. Like the First Nations in Northern America’s ,,,, but they Do not have a country ?

Where is the fighting?

Even Russia has heard of Kurdistan – they buy oil from them.

Turks, kurds, americans are invading Syria and these stupid arabs are helping them. I’ve never seen such a stupidity.

Arabs countries always have been colonized for their tribal rivalry!…even in time of Al Andalus…many Taifas( small independent territory ruled by tribes)..Allow the entry of Cristians troops to fight vs rival Taifa!…in the end Cristians ” fished in scrambled waters”…and manage to take all Peninsula Iberica( Spain) with the conquest of Granada that represents the end of Al Andalus and the Arabs presence during 800 years!…

They are so hypocritical. That’s why their lives is so shitty. They spend their time talking BS and blaming the aliens.

And jews of course, and USA and everybody not being them.

Guys, you are forgetting important fact: the Arabs are meta-ethnicity, not single ethnic identity, on the similar, but of course much stronger, way the Romans (Italians, Spaniards, Portuguese) are meta-ethnicity. It’s ignorant to interpret each people/tribe as part of the one. They share the same meta-language, but not the single language, they share the same meta-religion but not the single religion. There are many “kinds” of Arabs, the same way there are many “kinds” of us, the Slavs.

Incorrect. There is just ONE arab language, though with dialects. There are many slav languages and not always mutually understandable.

The caste system has always been used effectively against those who follow it , this is the successful divide and conquer strategy that is used. Tribal , religious , etc. it all works since so many see themselves different from the other.

You meant retake I suppose as the Muslims were just invaders into Iberia. They never inhabited Iberia before as arabs are from Arabia and the Moors were Amazigh from North Africa.

The reconquest took some 800 years in order to drive the last invaders out of the peninsula although fi Portugal was completely liberated in the 12th century. North of Spain was either never occupied (Asturia/Galicia) or already liberated in the ninth century by Charlemagne.

Galicia was conquered by Arabs…Asturias and Cantabria are small territory of Spain and was not conquest..but the rest of the peninsula iberica( Spain and Portugal) was Al Andalus ruled by Arab muslim!…The Arab andalusi lenguage was Clasic Arab diferent from North Africa!…Arabs( mainly from Yemen and Syria) were the population of Andalucia oriental( Nasre kingdom) while Moorish from North Africa live in the west part!…almost all of the habitants of Iberia were invaders..Celtas,Visigodos,fenicios,Cartagineses,Romanos,Arabs…even Vikings ans Slavics!

So in Al Andalus lived Cristians and jews beside Muslim!..Al Andalus like nowdays Syria was a religious war between radicals( Almoravides) vs the rest!..Cristians took advantage over all the muslim and jews!..and take all Al Andalus and expelled first Muslim and second jews or recover to Cristians!..Spanish language comes from latin but have many words which comes from Arabic!..so Arab muslim never learned their own History and all remain the same!

Even the Anglos have fought against each other and killed one another, your tirade against the Arabs gets boring. The problem is they fight wars for bankers like everyone else.

The problem with arabs is that they put religion in front of the race. Sunnis arabs vs shia arabs vs christian arabs. They are so stupids.

Some arabs fight with Turkey, others with kurds, other with USA, others with Iran, others with this or this. XD. The only that are killed are arabs no matter the religion.

The power of destruction of middle east religions is infinite.

These, and ALL, Turkish forces need to go and fight HTS in Idlib! who ban ABORTION!!!

If Syria were to allow the Turks to take another part of their land, they will never get it back. Turkey will hold onto it like they do on Hatay. Like they will do on Azaz enclave.

Syria can come to an accomodotian with kurds and SDF, but never with Turkey.

Hatay joined Turkey by plecibit. You are confusing Turkey with US and their allies(PKK).

Turkey has aligned with Russia and Syria and Iran! People tend to jump on the winning team! (just like Qatar) I think Turkey will massively attack SDF regions (because they believe they are terrorists) just when the SAA need to get to those eastern DEz oil and gas fields! How do u like them apples? U wanna war game for ISIS and HTS? ill do the same! Come on Turkey, teach those Israeli / US canon fodder a lesson! “THIS IS SYRIA”! https://media.giphy.com/media/Ny4Ian52lZDz2/giphy.gif

This is your wet dreams.

its basically happening! How is it a dream? Turkey is attacking one group… THE SDF Where is the SAA headed….. To DEz What does the SAA want ….. all of DEz oil and gas fields Who has OBVIOUS undisclosed agreements…. Iran, Russia, Syria and Turkey!

How is this a dream when its a reality!

Tell me EXACTLY which part is a dream? The exact part u think is absolute BS! Are your eyes open? This is a proxy war DUMMY!

Erdogan is head of terrorism.

Turkey not happy for what is happening to isis.

NATO ALSO doesn’t consider Al Nusra (not even in it’s new alphabet jacket) to be a terrorist organisation and they are a fly planes into America’s twin towers AL Qaeda affiliate so —- DIDDLY-SQUAT – for what NATO “thinks.”