On July 24, thousands of muslims, including Turkish President Recep Tayyip Erdogan, flocked to the Hagia Sophia in the historic heart of Istanbul, for the first official Muslim prayers held at the site in 86 years.

Turkish media and the government present the decision to turn the UNESCO Heritage site into a mosque as a ‘big personal victory’ of Erdogan. According to them, the mosque will mark the new symbol of the growing Turkish influence in the Middle East and the Islamic world in general.

According to Ali Yerlikaya, the Governor of Istanbul, this first prayer session will last 24 hours, until 10:00 AM Saturday morning. Traffic was blocked around Hagia Sophia from 10:00 PM last night in preparation for today’s event. Separate prayer areas for men and women were set up in the courtyard of the iconic UNESCO Heritage site.

The remaining Christian frescoes are covered by curtains during the Muslim prayers. Turkish soruces also reported  that there is an idea to cover them with special lighting and lasers in the future.

Thee Hagia Sophia was initially built in 537 as a cathedral in the Byzantine Empire, before being seized by the Ottoman Empire 900 years later and converted into a mosque until 1934, when it became a museum. In 2020, it once again became a mosque.

Authorities say the site will remain open to all visitors despite its renewed status as a mosque, and that its Christian part would be protected. However, the move already caused a wide criticism on the international level, and inside the Christian world. In this light the interesting fact is that as most of local Orthodox Churches publicly condemn the Turkish decision, the Ecumenical Patriarchate of Constantinople, which theoretically should be the affected party because this happened in the country where it’s based, limited its response to a few relatively soft statements. This position, according to some reports motivated by particular behind the scene promises by the Turkish government, also contributed to the current weak position of the patriarchy.

Formally, Bartholomew I of Constantinople and the Ecumenical Patriarchate of Constantinople are expected to be the first among equals in the Orthodox world. However, the constistent policy of selling the interests of the church in attempts to gain additional influence and power by Bartholomew I led to the sitaution when the Ecumenical Patriarchate became isolated from the rest of local churches that work to protect traditional and religious values of the people in the countries where they work.

The turning of the Hagia Sophia into a mosque and the triumph of President Erdogan also showcased the current division in the Orthodox world and the ongoing decline of the Ecumenical Patriarchate, actions of which led to this division.

MOER ON THE TOPIC:

Those white curtains are well placed to cover christian painting. 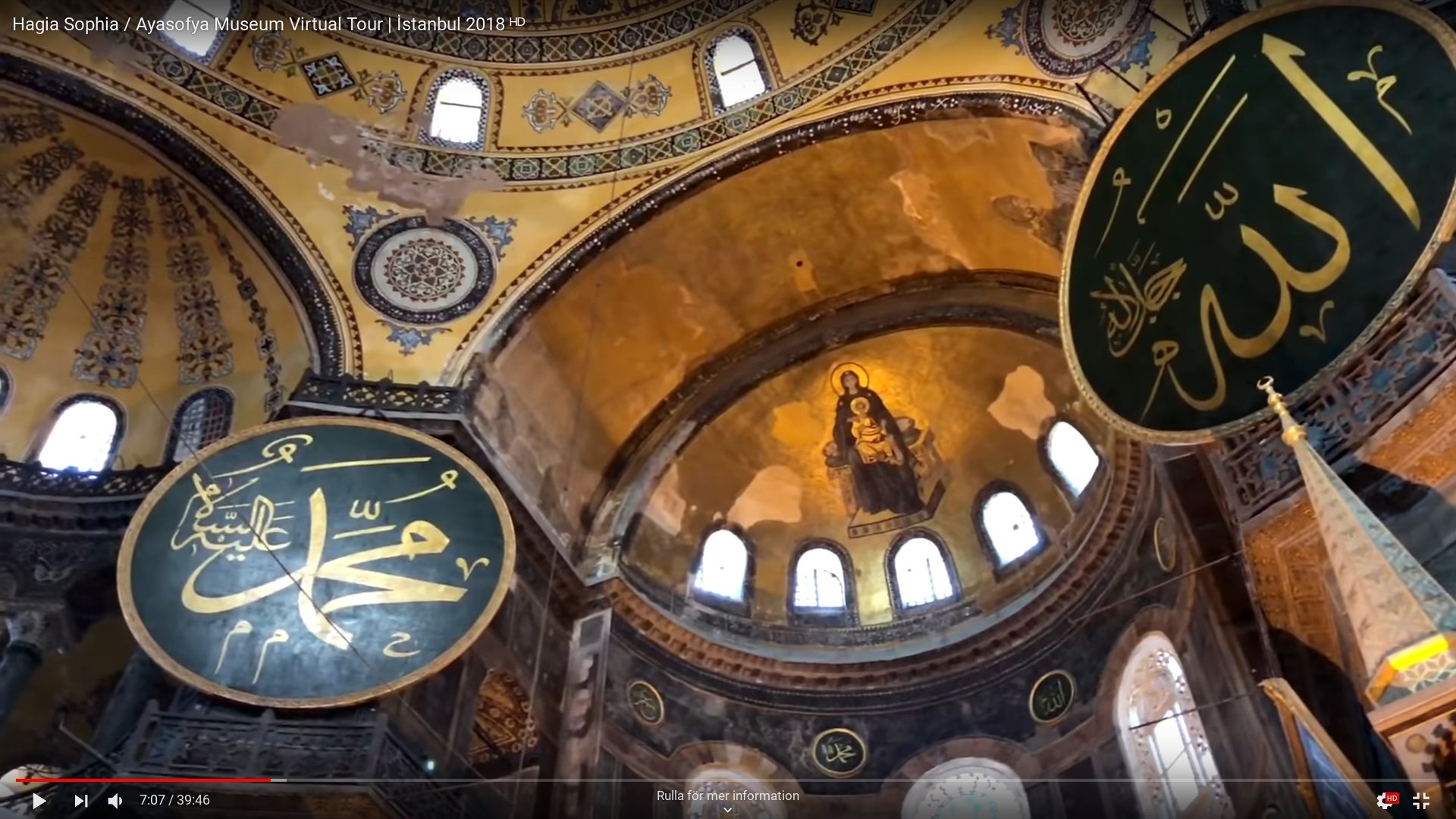 I think it is prohibited to have human images in Islam, and as they didn’t want to damage the mosaics, hence covered them

Actually turks tried to remove the mosaics exactly after they took the city, in 1453. But they couldn’t, without destroying the Cathedral entirely.
So is not a matter of wishing, is a matter of being not able to.

So theyhave the same technology as in 1453, so still can’t destroy the mosaics even though they eagerly want to?

They don’t have any technology. Russians didn’t sold them a technology to remove the mosaics, while US or China are not interested in the matter.

Tell me more about the Russian advanced contruction technology along with Russian companies dominating the Turkish construction market. Oh wait, its the other way round.

Let’s talk about nuclear reactors. Is it enough advanced for you?

Wow, so now removal of mosaics suddenly is a nuclear science.:))) Are you US educated? Because you are not very intelligent.

Oh, yes, for you, even reading and understanding seems to be a nuclear science.

It definitely is, I do usually read about nuclear science and of course understand it. Also an interesting fact i read in history. Turns out before a unified country Russians were paying Mongols, Khazars and other nomads not to attack them. Interestingly now Russian federal budget is paying (unequally) to caucasian subjects like Chechnya, Dagestan, Ingushetiya. The irony is that usually a vassal is the one paying not other way around. But now looking at the military bases where few caucasian soldiers are dictating even the officers or anywhere caucasians are the feared ones (and now wealthy), it kind of gives an idea who won in the war of caucasus in early 2000s.

You are the winner, congratulations!

So the government said they wont damage them just have them covered 24/7. Hahaha pretty much the same thing.

Not a same thing at all. If Ottomans did destroyed it, the world wouldn’t have that centuries old art pieces now at all. If covering it is “pretty much the same thing” as destroying it, it was covered during Ottomans, so what is the fuss about? Just imagine that it is destroyed 200 years ago and move on, nothing happened currently.

Is not an art piece, moron. Is an Orthodox church. Raped by your muslim friends. Punishment for rape is…

Church raped? Look at thesaurus, if you don’t know what a thesaurus is use a dictionary, it will move your way forward.

maybe, its not nuclear science

What an ignorant person you are. There should be no faces or mirrors in prayer.

If you have something to explain ( good for you) than explain.
He was not disrespectful to Islam (if that dimension bothers you).
So your unwarranted aggression is not needed.

We don’t like friendship of Christians. They have been the major anti-islamic forces in history.

Jens Holm
Reply to  The Objective

Things are both ways. As sekular I think less Tourists will visit Turkey and Tirkey seemes to have invested a lot in that extra income.

To me its also a museum for many bad ideas and a learner. Kemal kind of revitalized the relations.

No problem. I am not trying to sell you anything…
That was just thought.

So you are aggressive militant Muslim it seams?
The one that prefers to fight for Jews and CIA and calls that “Jihad” huh?

Than have minimum dignity and say openly that you don’t like any Christian before unprovokedly attacking others…
He didn’t provoke you.

So it is just because you think he might be “evil” Christian?
That is not good reason to be aggressive in conversation.

It is obvious that non Muslims can’t be your friends.
I personally couldn’t care less about that fact as long as you try to stay civil in conversation.

Ishyrion Av
Reply to  The Objective

You don’t have it. Your problem is you don’t have muslims friendship also. That’s why nobody will cry for you when you will go back to your mongolian desert where you came from.

I agree. Thats a very unlever decission and the mixted change even was made by Kemal as a symbol for the sekualr and open part for the new Turkey.

As being no Turks I already has seen for years that AKP by Turkey should need better relations to all and an improved sekularisme.

Hagia Sophia is not a common cultural area. Jerusalem is a communal cultural space. You have the same attitude towards what Israel has done ?

What?!
How that has to do anything with my comment?!
Did I ever mentioned anything about Jerusalem, Jews or similar?
And who the hell gives you the right to impose your stupid subject and even more stupid question on me if it is off topic and not in my comment at all?
Who are you?
A moderator on this forum maybe?
Go away.

Russians are stupid to spend their money there. I’ve been there a couple of times. Better off in Greece or save a little more and go to other places. Erdogan has gone off deep end with this move.

Talking about average Russian tourists? I am not best informed, but I think that Crimea, thanks to weak Ruble, has gained on popularity. I don’t think that Russian’s go to Turkey that much… like they did before

At least he know at leastsomething abot it.

Christians has the opposit oppinion. They use most of the pictures as example for what You should do and should certainly not as posters instead of fotograf.

Its the same with usisng open face and more. By showing Ourseleves, so we cant hide and lie as much(or should.

Here most muslims seemes to cover them, so Allah dont see them and also so the men dont rape women even the men are raised for it.

Often the women even need protected by their brothers and uncles, so they only can be raped at home by them:) .

Others are not allowed to correct that and thats ordered by Muhammed as an Islamic culture having walls around Your bought property and the raising for sale of the girls.

This is just a pr stunt.Islam has already collapsed and in 20 years it will disappear.

Hardly. Many muslims right now are looking for improvements. The result will be more contrast and also more, which – as You assume – will become sekular.

I am not religios but this confirms unclever stupidisme.

But Erdogan will be buried like a dog outside city of Constantinople.

The property of the Ecumenical Patriarch of Constantinople and his “domains” should be annexed into the Church of Greece. At least them the Church will speak up. Its also shameful that the Greek pro-EU government just sits there and does nothing.