On January 20, Turkey’s President Recep Tayyip Erdoğan said during a public speech in the central Anatolian province that the Turkish military operation against Kurdish militias in Afrin area has “actively begun in the field”. He added that the city of Manbij will be the next destination for the Turkish Army, according to the Turkish Hürriyet Daily newspaper.

The Turkish president also accused the US of not fulfilling promises it had made to Turkey regrading Manbij  and vowed to fight the Kurdish militants in the entire northern part of Syria up to the Iraqi border.

“The promises made to us over Manbij were not kept. So nobody can object if we do what is necessary … Later we will, step by step, clear our country up to the Iraqi border from this terror filth that is trying to besiege our country,” Erdogan said during his speech according to Hürriyet.

Erdogan also hinted that the US is changing the names of Kurdish forces in Syria in order to trick others and stressed that the Kurdish People’s Protection Units (YPG), the Kurdistan Workers Party (PKK) and the Democratic Union Party (PYD) are all considered terrorist groups by Turkey.

A huge convoy of Faylaq al Sham is on the way of Afrin. (Part1)

Meanwhile, Syrian opposition sources reported that the Turkish Army artillery continued shelling positions of the YPG on the Syrian-Turkish border around Afrin in northern Aleppo. In response, the YPG shelled the Turkish-backed Free Syrian Army (FSA) in Twice village east of Afrin with mortars, killing two FSA fighters, according to the Hawar News Agency (ANHA).

The Turkish Army also deployed more vehicles and tanks around Afrin area, which indicate that the Turkish side has not finished yet its preparations for the long-awaited military operation.

Turkish tanks moving along their base at the #syria border #afrin pic.twitter.com/KE7IvXZfsK

So Turkish vs Kurdish war started

The Latin Mass
Reply to  World_Eye

It is a continuation of the war started by the Kurds stealing much land from Syria. The jew wants a zionist state to the north and south of Syria, to encircle Assad and the Syrian people. Erdogan hates this zionist idea because it would be the start of a Kurdish terrorist puppet “state” backed by Washington and Hell Aviv. 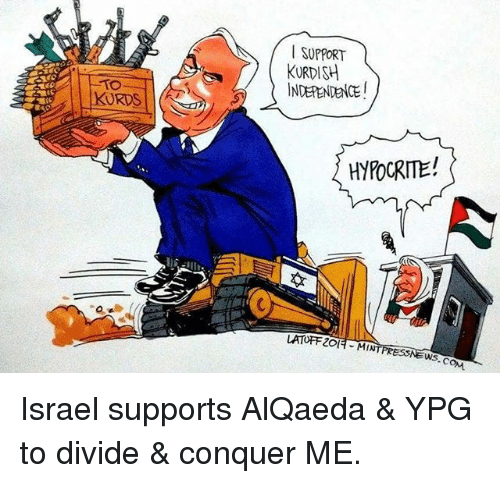 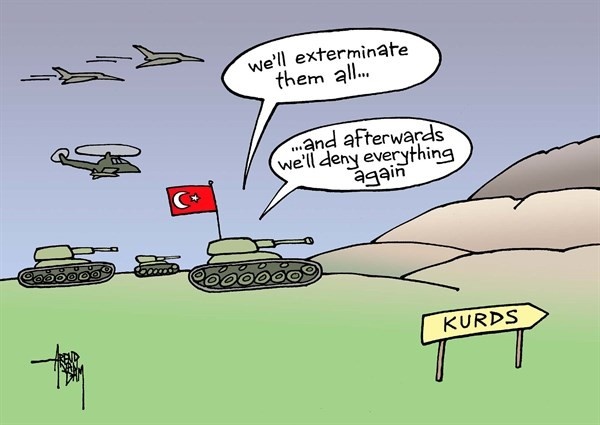 cant kurds hit the turks at the border while they are waiting their reinforcements?

That would be great for Turkey, but I don’t think the corrupt Kurdish leadership is stupid enough to do it.

It would prove the Kurds are an invasion force which they are and rally all the Turkish people behind Erdogan. Turkey would probably then seize all USSA military equipment and stuff at NATO bases in Turkey

Fat chance. There’s nukes at Incirlik and the last thing Turkey will get away with is a broken arrow scenario.

I guess you can’t read a map and you are geographically illiterate. Turkey can take all the American / NATO bases in Turkey within a couple of hours or less if Turkey wants to, because they are in Turkey, surrounded the Turkish armed forces, which are the second largest armed forces in NATO and the bases are many thousands of km away from the USSA..The USSA lost in Iraq, Afghanistan etc where the locals could hardly fight back, so imagine the USSA fighting a country like Turkey that can strike USSA assets all over the middle east and Europe. With the USSA being bankrupt such a war would collapse the entire USSA economy very quickly.
The empire has lost Iraq, Afghanistan, the Philippines, Turkey and Pakistan only the last 2 years.

Man, you don’t know about what the US aerospace industries have been up to?
50 years ahead of everything you know.

Wow you are dumb. The bases are in Turkey surrounded by Turkish tanks which are right beside the and the Turks the can shoot planes on the ground in their hangars before they can even take off. Yes USSA planes are so good now like the F35 lemon!!!!
Half the Pentagram budget is stolen right off the top before $1 is spent on the military. USSA jets were the best 20 years ago. If their jets are so good today why do they lose every war??? 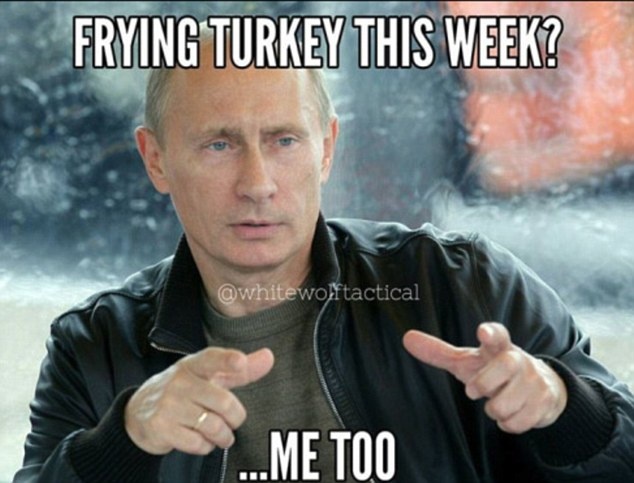 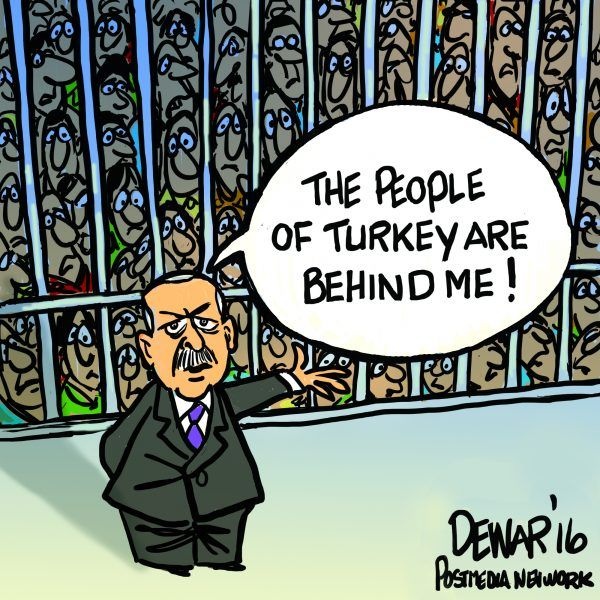 The Kurds, unfortunately, are beset with brain-dead leadership. By accepting help from Israel and looking to the US for support and protection, they have poked their fingers in a very sensitive Arab eye. Russia and Iran see that the Kurds in NE Syria have aligned with and become tools of American foreign policy, so they have agreed to allow Turkey to push into Syria, no doubt under agreements that after the war is over, the SAA will take full control of the entire border. Btw . . there is a conspiracy buddy. Open your eyes and brain, research it thoroughly and it will start to become very clear . .

The P2 Illuminati Freemason lodge out of Italy wants to carve up Turkey for a free independent Kurdistan. This is public knowledge.
Turks control entire water supply of fertile crescent and literally have a civil war with the Kurds in their own country. Turks just want to expand their Ottoman Empire.

In the kurdish issue turkey is the best buffer zone and altetnative.

This is very good news. If the SAA atatcks YPG/YPJ later then the world will say Assad is attacking ‘his’ people again.
Let Turkey do most of the dirty work, then the SAA can move in 10 months from now and the YPG/YPJ terrorist will offer little resistance.

exactly, let Assad deal with the Western backed rebel terrorists and ISIS. And have Erdogan save the rest of Syria in dealing with the zionist Kurds.

Mamie
Reply to  The Latin Mass

Gℴogle giving you $97 hourly to do easy tasks from the comfort of home .. Do work Some just few hours daily and stay greater time together with your circle of relatives … Any one can also have this work…last Friday I bought a latest Buickafter just earning $13582 this last five weeks .it’s really nicest-job however you could now not forgive yourself if you do not check out it.!bw02v:➽➽➽ http://GoogleNetJobsTrackerWorkFromHome/more/cash… ♥♥♥n♥♥q♥♥n♥♥♥s♥♥d♥♥♥z♥g♥a♥♥♥p♥♥g♥i♥♥♥x♥♥e♥♥k♥♥v♥♥s♥♥♥o♥♥n♥♥k♥r♥l♥♥♥l♥y♥♥e♥♥♥t:::::!ue451b:lhuhu

No that’s not how it works. If Turkey’s jihadi pets take over Afrin area, then you can kiss it goodbye. The Turks will setup a new military base there and entrench themselves, thus Syria would have to go to war with Turkey to reclaim it’s own territory.

The Afrin Kurds are actually on good terms with the Syrian government (hence why some Russian troops were stationed there until now), and it would be possible to reintegrate the area into Syria after the war if the Kurds stay in control.

Unfortunately Jewish conspiracy-types like yourself only see the Kurds as a single, US/Israeli backed entity – therefore in your mind anything backed by ‘Jews = bad’.

The Latin Mass
Reply to  SnowCatzor

As opposed to having the Kurds possessing it and turning it into a jewnited states backed zio-Kurdistan? Better the land be in Turkish hands than in Kurdish if there are terrorists from Washington involved. If the Kurd’s masters in Washington and Hell Aviv weren’t so hell bent on creating a Kurdistan, Erdogan would not have done anything. So Assad must yield to Erdogan for now and have the fate of the Kurds be decided by Assad, Putin and Erdogan in a future Sochi Peace Congress. If Erdogan fails in taking Afrin, the Kurds and their allies the zio-west will be emboldened and we could have a nightmare scenario of a zionist “state” of Kurdistan. An ally of Washington and Hell Aviv. An ally of genociding Palestinians. This action was brought about by Washington, not Ankara. Ankara is doing what any free nation would do with a terrorist army on their borders with zionists arming and building a security fence.

Like somone said before its much easier to kick out erdo than the us.

Recently announced plans by the US to create a 30,000-strong “border defense force” comprised of US armed and funded Kurdish militants may be intentionally designed to grant Turkey a pretext to begin widening its occupation zones to provide cover for the remnants of militants likely to be evicted from much of southern Idlib.
It should be noted that Afrin is located between territories Turkey is currently occupying. Turkish troops, should they seize Afrin, would effectively have expanded Turkey’s “Euphrates Shield” by 30 miles (53 km) and present an opportunity to for its troops to link up with troops of Turkey’s “Idlib Shield.” This would create a large, singular buffer zone within which US-NATO forces could harbor militants driven back by Syria’s most recent offensive.