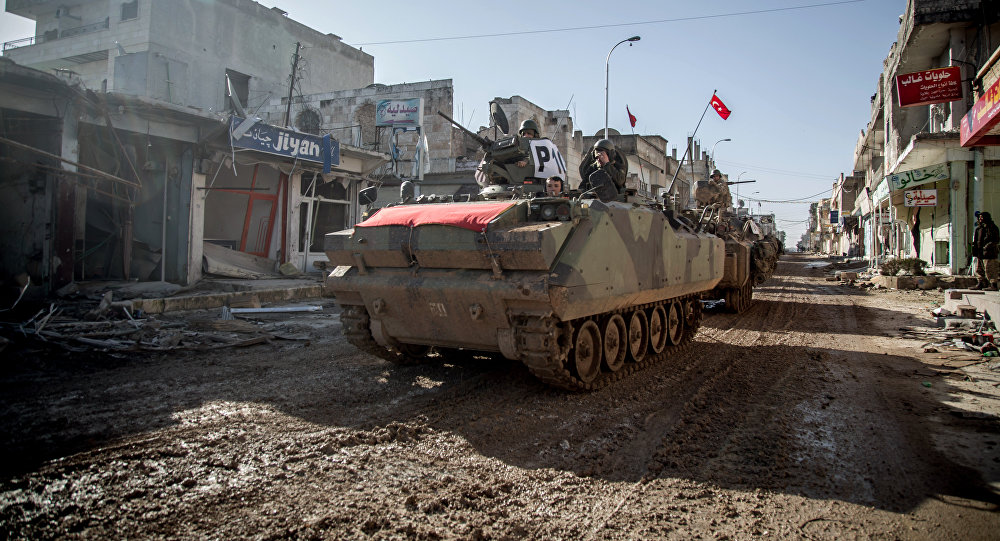 Mohammed al-Jawhani, one of the military commanders of Thwar al-Jazeera al-Swria – one of the Free Syrian Army (FSA) groups backed by Turkey – reportedly confirmed that the preparations for the Operation Euphrates Sword against the Kurdish People’s Protection Units (YPG) in Afrin in the northern countryside of Aleppo is about to be completed.

Al-Jawhani said that FSA troops will withdraw from these areas after capturing them, where they will be handed over to local civil councils for their management.

It’s still unknown wether the Turkish Army will directly participate in the operation, or it will provide artillery support and air support to FSA troops only. It’s also believed that Ahrar al-Sham will be an essential part of the offensive. However, it’s unlikely that FSA will be able to capture Afrin City it self because of its location and importance for the Syrian Arab Army (SAA).

Kurds as puppets of the US terrorists should be left to their own luck, Russia should leave the Afrin area, so-called Rojava/Turdistan is not going to return it Damascus’ jurisdiction; most likely, they’re gonna open more US bases there

Then once ISIS is defeated the Kurds will be back on the menu as terrorists , the US needs the EU and the division is coming there already. The break up idea is losing support among the NATO allies leaving the US in a precarious position on the world stage.

Israelis miscalculated. The Turkish would not sit by idly watching the Kurdish terrorists grab territory. This shows the FSA were under foreign control, Turkish and Qatari. This shows you never play along with Israel and its puppet the USA. They will always betray you. They just ask you to help them out, to stab you in the back, and even make war on you. Saddam – it happened to him. He invaded Iran for the USA. Became the hated target of the USA.

Shah of Iran – was ally of the USA; they turned on him, grooming the Islamic extremist exiled resistance groups; the Shah turned against the Zionists near the end of his reign, but it was too late.

Al Qaeda and Taliban – USA told them they were valuable members of the resistance to the Soviets; USA turned on them in the so-called War on Terror, that was kicked off after Sept 11.

Gaddafi – they pretended they were his friend; behaved as if they saw him as a “progressive”; his son hobnobbed with the British Royals and partied with the Rothschilds (“Just put away your weapons and you will get full acceptance; you don’t need them anyway; we’re always afraid of weapons getting in the hands of extremists, that’s all.”) …

They will start a campaign of vilification against Turkey now that it has gone to the other side. Build up Kurds in the eyes of the public; and tear down Turkey.

true. US strategy in Middle East is clear. Its all about the “balkanization” of islamic nations in order to create wars that justify its perpetual “fight against terrorism”. Creating and then “solving” problems only to create other bigger problems and so on. Turkey, a former ally, is the next on line because the creation of an “independent and strong” Kurdistan demands access to the Mediterranean sea. Nothing personal, of course. Its just business as usual.

I’m understanding this as Turkey (via) FSA will clear Afrin of YPG on behalf of the SAA (also to ensure Turkish security), and is nominally under Syrian control so long as they do not move their military forces in?

dutchnational
Reply to  The Farney Fontenoy

You are misunderstanding. Turkey was hoping for Russian and Assad approval to be “allowed” to try to take Afrin and enter Idlib. Facts on the ground make the latter impossible.

Projected resistance and losses made the former impossible but with 20k+ attacking Tell Rifaat, maybe they could take it with the risk of SDF taking Azaz and Jarabulus in their back.

If only 7k of the mighty FSA and AAS are attacking, they will be defeated.

Beyond all of this, now that Assad and SDF made a deal Assad is going to pay for reopening oilwells in Hassakah, paying for transport in return for 65% of sales and 35% going to SDF and tribal allies, Assad has a vested interest in not agreeing to Turkey attacking SDF.

Not “follow the money”, better “defend and build-up Syria”.

I agree here. The question remains what kind of Syria? A better than before Syria would be preferable to going back to the old alawite family dictatorship of the past.

It is important to avoid/to repeat some of the mistakes in the past: corruption and concentrating money and power to a few of the elite. Many things were better than in Europe. And yes, the kurds in Syria who are different from other kurdish streams should have a better intergration. But is only to them to decide. Otherwise they will be crushed and two enemies, Assad and Erdogan, can and will “work” together.

The case for a FSA/Tirkish attack on Afrin is getting weaker and weaker. Late june it was 14.000 FSA and 7.000 TSK. Now only 7.000 FSA while AAS has been demolished in Idlib and weakend in Azaz. Meanwhile, newly trained SDF in the Afrin region last month some +3k, now over 30k+.

SDF in well entrenched defensive positions and with the high ground, 7k attackers will be plainly and rapidly defeated. Both AAS and FSA have plainly demonstrated not being able to take heavy lossess and will retreat as soon as their lossess number in the hundreds.

Question is whether SDF will counterattack into the Azaz plains and clear out this colony of Turkey.

7000k won’ t be enough. And: many of them ran away when it gets difficult and hot.

Glad to read we have the same opinion on this.

Do not like FSA and it is not up to the Turks who settles south of their border.