The Turkish military observation post near the town of Sher al-Maghar in northwestern Hama was shelled, once again, on May 31. 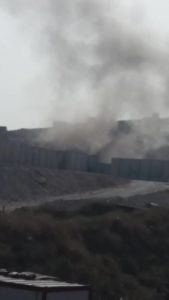 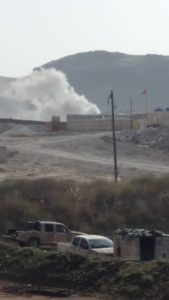 According to the Enab Baladi news outlet, pro-government forces were behind the shelling. These accusations have not been confirmed by the Ministry of National Defense of Turkey, yet.

“Artillery shells landed inside and around the Turkish post … There are no further details regarding the situation of the Turkish soldiers stationed inside or other military losses,” the pro-opposition outlet’s reporter said.

Earlier, radical militants launched a surprise attack from their positions near the Turkish observation post at the town of al-Hwaiz, which was recently captured by the Syrian Arab Army (SAA).

Sher al-Maghar’s observation post is one of twelve such positions established by Turkey around Idlib last year. The post was shelled twice this month, with the first attack, which occurred on May 4, injuring two Turkish service members.

Following the second attack, on May 15, the Turkish military deployed an Otokar Cobra II infantry mobility vehicle (IMV) equipped with a SERHAT II Counter Mortar Radar in the post, likely to identify the source of fire.

The available information indicate that no Turkish service members were killed or injured as a result of the new attack, which means that Ankara will likely ignore the incident.

Get out Ottomans, the Arabs dont want you.

Perhaps you should start supporting the Palestinians, the real freedom fighters or Hezbollah.

You can call me Al
Reply to  ╭∩╮( ͡ʘ ͜ʖ ͡ʘ)╭∩╮

Your dead Mummy wants you to suckle here again, fuck off you retarded, inbred, low IQ, Son of a goat.

Arabs destroyed the moth eaten Ottoman empire and now Erdogan’s fantasy of annexing the best lands of Syria will be a noose around the Turks.

Pakistani Chief of Army Staff, has endorsed punishment to two Army and one civil officer on the charges of espionage / leakage of sensitive information to intelligence agencies of America and UK.

These types of crocks that secretly work for America and UK are in each country be aware.

Some country’s leadership is also crock for example Saudi regime that work for America and UK and divert people attention from challenges that world face due to US and Israeli brutal terrorism and butcher children by multiple methods.

Like I said before, how conveniently of Turkey to have placed these troops so far into Syrian territory so they can be shelled to send a message to Ankara. As opposed to shelling them on Turkish soil, which would be an act of war.

I watch Turkish news and the Anatolian peasant conscripts dying daily in Syria and Iraq are causing problems. The Turkish economy is bankrupt and if the Syrian forces and their allies kill many Turks, Erdogan will face huge problems as 1,300 officers are already in jail and there are more coup rumblings in the military as the cost of an illegal occupation of northern Syria comes home to bite. It is time to cook some Turkeys before Thanksgiving.

Fuck them, they want to be beside their loved AL-QAEDA mates. They want to protect them, well they can protect the HTS with their ottoman soldiers. Turkish soldiers are worse than the Saudi ones, when PKK attacks them they are frozen still with their rifles in their hands and they don’t resist to PKK attacks, same as the Saudis when the Houthis attack them, same song is been sing, they lay down their arms with thoughts in mind that the Houthis will capture them or else, instead they execute them on side. Turkish army soldiers are the most lazy ones in the world, no bravery at all, no moral. The ones with most bravery and morale to die for others and especially for their country are the Russian army. The RUSSIANS are no fucking JOKE, they are the real deal.

Brave Turkish soldier hurt you badly.? now f*** off back to your cave

BRAVE Turks? Hurt me badly?! LOL are you for real. I live in Europe LOL. But you Mustafa in what desert are you. Wait go look for water… The thirst will kill u.

Observation posts are the wrong name for these installations, there are 2 better names they should be called, one of the names should be terrorists safe haven, because that’s what they really are, and they could also be called viable targets for the SAA and Russia, because that’s what they really should be, and the last thing they should be called is Observation post. By my count this is the 4th air/artillery strike that’s threatened Turkish interests, the first not long after the first Astana agreement was signed and it was a Russian airstrike that hit rebels not far from one, the second was another Russian airstrike that hit a town in Latakia where a Turkish delegation was meeting with locals in an attempt to set up another OB post in their town, and the third was last year when the Russians dropped a thermobaric bomb on the rebels only 200 metres from one of the OB posts, I joked in my comments at the time the Turks must have felt the heat burn their hairs they were that close to the strike. But the Russians don’t use artillery and this strike was by artillery, which means this time it was the SAA doing the business, not the Russians. I’m going to take that as a good sign that the SAA isn’t at all interested in the Putin/Erdogan inspired ceasefire, they still have their eyes on the prize. Go SAA GO, treat those filthy terrorist safe havens they way they should be treated, bomb them until not a trace of their existence is left.