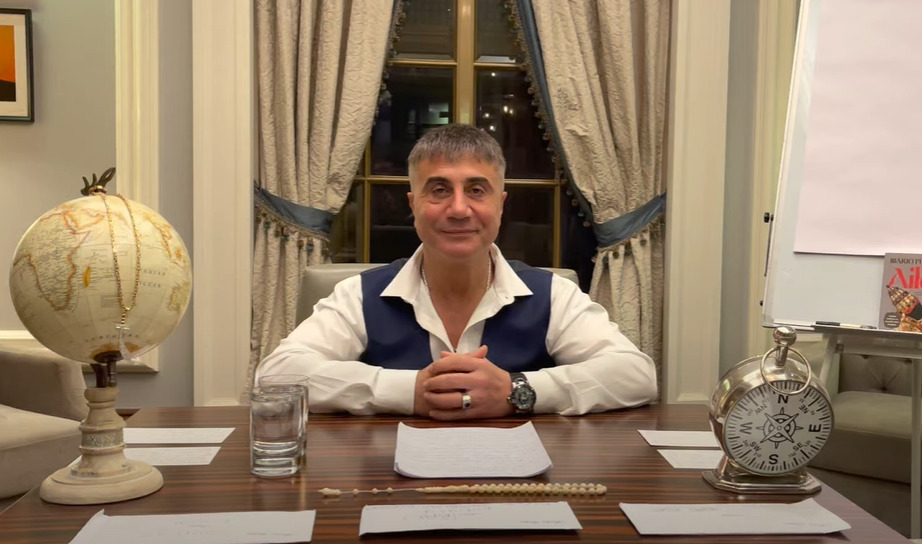 Sedat Peker as see in his most recent YouTube video.

Turkish mob boss Sedat Peker has opened up in a new video about the Turkish government involvement in illicit trade with Syria and the transfer of weapons to the al-Qaeda-affiliated al-Nusra Front.

Peker, once described as an ultra-nationalist and an ally of the ruling AK Party of Recep Tayyip Erdogan, began revealing information about the corruption of senior Turkish officials and their involvement in illicit activists after a fallout with the authorities. The new video, which was uploaded to YouTube on May 30, was his eighth.

In the video, Peker explains in details, unveiling names, how smuggling with Syria is being run by a ring of influential Turkish figures and commanders of the al-Nusra Front, now known as Hay’at Tahrir al-Sham.

“Let’s open the first Pandora’s box, what do you need in order to carry on commerce in Syria? You go to Mr Metin Kıratlı, the Presidential Director of Administrative Affairs in the Külliye [the name Turkish President Recep Tayyip Erdogan uses for his presidential complex],” Peker said. “Smuggled crude oil, tea, sugar, aluminum, copper, used cars… These add up to billions of dollars, huge sums of money.”

According to Peker, after getting Kıratlı’s approval those who wish to smuggle goods to or from Syria should approach the MT Group, where they would appeal to Murat Sancak, an ally of Erdogan and the heir to Turkey’s leading military vehicle manufacturer BMC, as well as to Ramazan Öztürk, the son of BMC Board Member Talip Öztürk.

“After you pass them, you can go to the finances guy of al Nusra, Abu Abdurrahman. He sometimes goes by Abu Sheima. That is how trade works now,” Peker said.

In a damning revelation, Turkish President’s former partner in crime, Sedat Peker, claimed #Erdogan‘s family enterprise made billions of dollars from all sorts of big volume illicit trade with #Syria in partnership with al-Qaeda, named names on key people involved in such scheme. pic.twitter.com/JtWVbZrdpI

Peker also said about the transfer of weapons by Turkey’s National Intelligence Organization, MİT. The mob boss explained how he was involved in the process that started with an initiative to support Turkmen fighters in Syria with non-lethal equipment.

“Drones, radios enough for all fighters there, bulletproof vests, this, that, trucks’ full…” Peker said. “We thought up this project, and spoke with a lawmaker friend of ours. He took the idea and passed it along to the necessary places. Then they said they would give us extra trucks, to travel alongside ours.”

According to Peker, the extra trucks, which were sent with the “aid” convoy that carried his own name, were loaded with weapons.

“We didn’t know what was in the vehicles,” Peker said, before clarifying. “When I say we didn’t know, I mean there were weapons, I am not a naïve child.”

The operation was not handed by the MİT, rather by SADAT, a defense consultancy company that is known to be owned by a former security adviser to Erdogan. Peker claimed that he was a financer.

The “aid” which was supposedly heading to Turkmen fighters ended up in the hands of the al-Nusra Front that is designated as a terrorist group by Turkey itself.

“Our Turkmen friends said the men [who sent Peker videos thanking him for the shipment] were with al Nusra. Others confirmed that the shipment was going to al Nusra. Yes, through me. I am being sincere. But I didn’t send them, SADAT did.” Peker said.

SADAT has denied the allegations made by Peker. However, no one was expecting the company to acknowledge its possible role in weapons transfer to a terrorist group.

Time is the great revealer of truth. If Mr Peker is a mobster then he is going to be pretty hard to shut up. He will be familiar with the usual ways gov’ts silence their critics. I’m sure there’s lots more to come.

This guy is just confirming what we have always known about turkey,they have supported that head hacking filth from day one,only question is why the hell have they not been dealt with?

A man of culture, just look at that compass thing 😃

Not surprising. Knew this since 2014.

Why is he still around? Around because the US and Mossad were part of this smuggling operation all along.

I remember the weak- assed excuses those Yanks gave when all these shiny new ISIS pick- up trucks started appearing.

When criminals fall out, they eventually rat each other out. Basic rules of the criminal game. Turkey has a criminal leadership, as evidenced by fact Turkey has been engaged in international, mass-scale, arms trafficking across border into Syria, and then using the very recipients of those arms (militant proxies) to systematically plunder Syrian private and public infrastructure for nearly a full decade. Turkish AK Party and its Erdogan leadership = Turkish institutionalized state level criminals.