On August 17, the Turkish military deployed several M60T battle tanks in the southern province of Hatay, near the border with Syria, according to the Turkish Anadolu Agency. The state-run news agency noted that the battle tanks were recently upgraded by the Turkish ASELSAN company.

Ali Özkök, a Turkish journalist, revealed that the tanks were deployed in the town of Yayladağı, which is located north of the Turkmen mount in Syria’s northern Lattakia. Earlier this year, the Turkish military established an observation post at the mount, which is considered a part of the de-escalation zone in northern Syria.

Developing: The Turkish M60 tanks were deployed to Yayladagi, which lies near the Turkmen mountains in Syria’s #Latakia.

The Turkmen mount is known for being a stronghold of the Turkistan Islamic Party (TIP) and Chechen-led Ajnad al-Kavkaz. Despite that both groups are affiliated with al-Qaeda, they are still operating around the Turkish observation post and along the Turkish border.

Earlier this month, the head of the Russian reconciliation center, Major General Alexei Tsygankov, revealed that armed unmanned aerial vehicles (UAV), which attack Hmeimim airbase on a regular basis, are being launched from northern Lattakia.

Following this statement, several observers predicted that the Syrian Arab Army (SAA) and its allies will launch a military operation in the Turkmen mount area soon. However, Syrian opposition activists are confident that the deployment of Turkish tanks in Yayladağı will prevent such operation.

At this rate the Turks will be fighting everyone,,WTF are they playing at,,??,because they wont be allowed to annex any Syrian territory,,That dream is over.

They can annex it unilaterally and ignore everyone like israel.

mr ..nothing to do with Annex thing any Syrian territory .just to protect our borders.if the ? force attac idlib .whats gone Happened to innocent people they going run to Turkish border we don’t want anymore refugees. plus freedom Fighter they can run towards Israel.

Terrorist refugees is what turdkey deserves for unleashing terrorism on Syria and stealing Syria’s oil.

to you everyone terrorist .haci do think ? Russia.iran.hezoloa doing you a fever naaa Syria never gone be same again.so be friendly with your Neighbour you will need each other .fuck America Israel Russia Iran and hesbo Specially ungrateful kurks .they destroy Syria’.

Sorry M&M but the ottoman empire is gone forever ( Ура!). Get used to it.

Russia is quiet so all this is coordinated with Russia, on its own the Turks cannot do shit in Syria if they don’t agree with Russia. So this is a part of operation to clean HTS from Latakia = Maybe. But obstructing some operations of Syrian Army no. The Turks can do whatever they like in their borders.

i think, turkey play as russia did in akbhasia and south ossestia, they want to have a permanent peace keeping force in idlib and latakia

want and can is two different concepts. Nothing in common between the two realities and your example.

yes thats what i mean, turkey want to extend their influence in syria, just like russia to georgia, the difference is russia can defend and counter attack itself to any country politically and econimacally while turkey cannot stand any chance if the usa, russia or china attack them

turkey is not acting and reacting emotionally. They have a strategy and execute it with a lot of help, as things show to this point and the only one who attack turkey economically it is US and they can not win turkey in this game in view of who is backing them up that in this case is possible both SCO and BRICS to fully support turkey and use her to win and make the $ obsolete, in the international trade.

So russia or china they will not attack turkey they will take her over, for a pennies.

BRICS is like mud masonry made with dung. They’re all weak and full of shit.

and nato is not? lol

no kid, something you have not, obviously mastered.

Qatar lent money. Russia and china havent although im sure china would like the ports and roads turkeys not desperate enough.

Id guess russia is content to use turkey but resents their crimean and caucasus influence.

Russia been using turkey for a long time now and china make a lot of openings and this is only the beginning. That part of the game has not started yet due to the fact all participants are aware that turkey is not one to have watching your back or relay on her not to backstab you at the end.

Lets see first what happens now that they will face the turks (syrians) in order to free their lands. In any case. That is the time all will clear, though with turkey now having only the choice which master to chose……… we have a case that is in direct conflict with what erdogan is attempting to revive with himself center stage.

Or as you have said before, US offers Turkey a “Deal”, Turkey can have US territory east of the Euphrates River and create a mini “Turkistan”, but the US gets a pipeline to the Med., or Greece., and no S400 ( stay within NATO-Control).

If this scenario will play then it will play now that Syria will free her territories under turks occupation and the amerikans. But in view of what is been happening the last month, it appears all scenarios are on the table and is who, offer the best offer to the turks they act accordingly.

On the other hand I see china as well russia covering the vacuum west is creating in turkey, as well Qatar step to help so I dont see IMF and WB succeeding against turkey what they attempt to achieve. I believe the picture will clear when the last step is taken, not before and the last step will be now with Idlip and Afrin.

Ain’t gonna happen. You and I with slingshots could defeat SA.

Ok, and whom they want to scare? lol

Erdogan is going to kick Putin from Latakia

wow….LSD is making a comeback

Reply of the week!!!

Since the sanctions kicked in, krokodil is life

No more like the SAA will kick Turkey back across their own border!

These tanks are probably best used if they never leave their transport trucks, at least they can hope to reach a speed of 10 km/h.

the upgrade is nothing much the better part is the antitank missile system that they acquired from ucraine with a remote machinegun on top..
they use them to support infantry because that type in better armored than léopards…

U.S. Coalition wants to take Syrian Oil by Kurds. The Turks were dealing with ISIS. They do not want Kurds.

M60? These were used by Israel in the 1967 six day war. Some very obsolete tanks upgraded to become slightly less very obsolete are going to prevent the coming offensive… really. Ok, if that makes the doomed terrorists feel a little better so be it. But it will change nothing. This is some public relations move to give the appearance of Turkey standing behind the Jihadists.

But if Erdogan wants to really make an impression, he should upgrade the Turkish outposts with catapults and crossbows. The terrorists will then really have bragging rights as Assad’s forces could not come anywhere close to achieving this level of obsolescence – go for it Erdogan.

There are reports of Turkish catapults moving to the front lines !
This is stationed behind new border wall. :DD 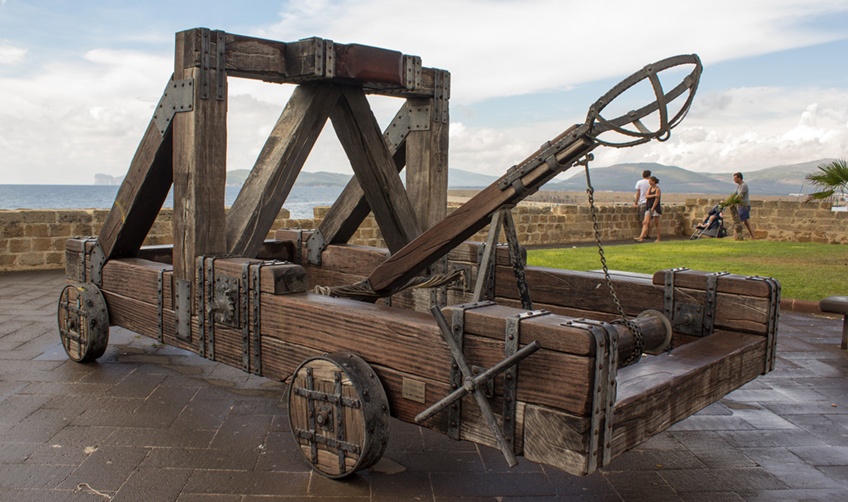 Then it is as I feared.

Terrible memories of the last encounter with these lethal machines. I remember vividly how the lead Tank took a direct hit in a highly vulnerable area. The impact scraped off a very sensitive part of an adult themed mural painted on the front of the tank. The crew was absolutely devastated.

Russia will have no choice but to employ counter battery operations prior to starting any offensive operations. Unfortunately, this operation may take a while as these catapults are equipped with a type of stealth technology. Unlike typical stealth conferring technologies, this stealth system works when the catapult is already detected by the enemy.

When the enemy detects the catapult, the stealth system causes the enemy to ignore the catapult due to their assessment it poses no threat. Brilliant.

i wouldnt be surprised lmao

“Slightly less very obsolete”, hahaha I like that one.

Artillery support from across the border.

They already have annexed northwestern Syria.

Syria will play hell trying to dislodge them.

Turkey can do anything it wants in that area. It is overwhelmingly the most powerful military force in the area. And Russia does not want to see that point proved. So get ready to redraw some boundaries.

M60? lmao, just give it up already turkey, and join the cool kids and the future (iran, syria, russia, etc)

Assad asked Erdo if he had any clay pigeons for target practice and he said …Nnnooo, but I do have a few sitting ducks. Nah, he just doesn’t want to lose any of his fancy Leopards.

Two men with a Kornet missile system from Russia can take out two tanks in less than one minute. The new Kornet is a fire and forget Weapon too.

Manbij is the only place in Syria that the Russians and SAA Army could never touch easily. Kurdish fighters are backed up by NATO and US special forces.

Hezbollah says we love these Turkish tanks they pop like popcorn in a campfire when hit with a Kornet missile.