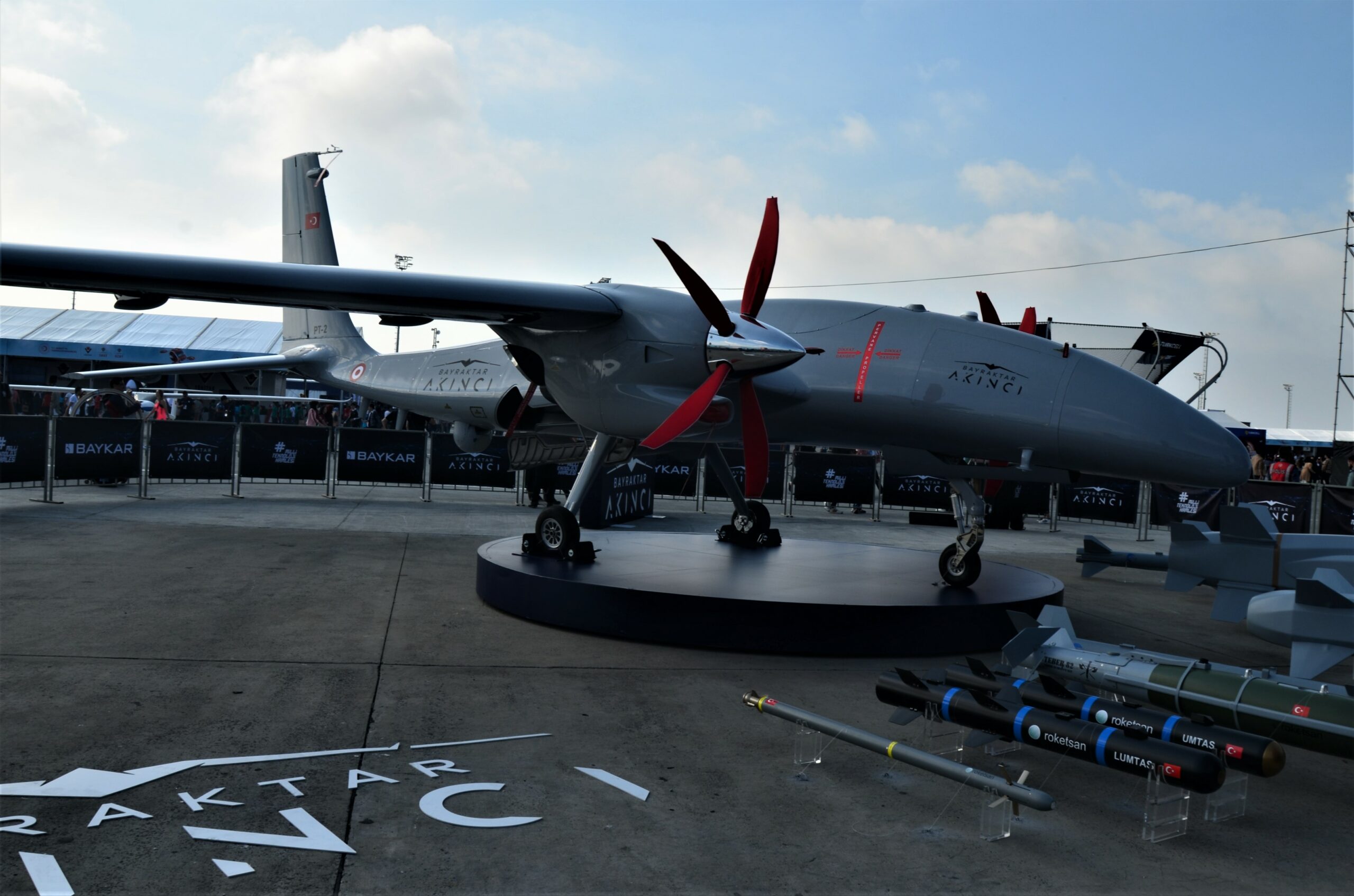 The advanced drones entered service with the Turkish military in a ceremony held in the northwestern province of Tekirdağ and attended by President Recep Tayyip Erdoğan, Baykar’s Chief Technology Officer (CTO) Selçuk Bayraktar and many other officials.

“With the Akıncıs UCAV [unmanned combat aerial vehicle], Turkey has become one of the top three countries in this technology,” Erdogan, who signed the new drones, said during the ceremony.

Two Akıncıs drones were handed over to the Land Forces Command, 2nd Army Drone Battalion Command while the other two drones entered service with the 341st Gölge [Shadow] Squadron of the Air Force Command.

“With Akıncı UCAV, Turkey has become one of the top 3 countries in this technology” https://t.co/rxRCHmm4jk pic.twitter.com/8zB2tedipv

With a wingspan of 20 meters, Akıncıs is among Turkey’s largest combat drones. The drone was designed by Baykar to carry out intelligence, surveillance and target acquisition (ISTAR) missions, command, control and communication (C3) tasks as well as combat operations.

The combat drone can deliver a wide variety of weapons. Earlier this year, the drone test-fired the MAM-T glide bomb. The bomb has a maximum range of 30 km and is guided by GPS as well as semi-active laser. The drone also tested the HGK-84 guided bomb.

Last July, Akıncıs set a new national aviation record by flying at an altitude of 38,039 feet and staying in the air for 25 hours and 46 minutes.

The Akıncıs combat drone will boost the long-range combat and surveillance capabilities of the Turkish military, which has been expanding its operations in the Middle East and North Africa like never before.

The Objective
Reply to  Chess Master

Who cares about your votes. They only matter on SF.

Turboprop = nice slow & easy target for Syrian SAM’s. Don’t think for a moment that a ceiling height of 38,000 feet will save them should they stray much past Idlib’s occupied territories.

All done with US and European tech and paid by filthy Gulf Wahabbist nouveau riche trash!

Another dumb idiot 😜 jealous r we

STFU moghal…….you got no standing on this planet…….you fukkin guppu mongol people. Don’t run your mouth too much. Bigger powers are wondering whether to gulag yous all back to the east torkestan of xinjiang. Nobody likes you cunts…….The Arabs, the Greeks the Persians the Armenians……nobody!…..You need to learn how to behave in the neighborhood or else!

Erdogan is the most popular leader in the Arab world. He’s also the most popular leader in the Muslim world. That makes Turkey the most loved country in the Muslim world and Arab world. About your declining powers conquering Turkey, it is much too late. The U.S has too many problems and Russia simply doesn’t have the military might to even defeat Turkey one-on-one. All that is left of Russia’s power is nukes. Strip Russia of its nukes and it is just another Britain. China is not looking for a fight with any Muslim country. It seeks cooperation with the Muslim world. Russia and America are the real warmongers of our time, but they simply don’t have the military power to achieve their evil designs on the Muslim world. Afghanistan is the opening phase of your ultimate defeat. From now on, you won’t get any decisive victory against a Sunni Muslim army. That time is over, and you’ll soon know.

brah please…..do you know how much debt turkey is under as of today? if Iran cuts the oil and gas and Russia does the same do you realize what will happen to your chinku ass? do you?……We can fuck you in front of everyone, but we are not uncivilized like you to kill innocent people. Don’t think yous got any balls…….We cut them off in the SyRaq……you got that?……Don’t talk it up…..you know your place.

doc, you are still dumb no? ugly gypsy iranian living under famine selling their girls all over the world no?come on ugly nation,know your place no?All you can do is bark and bark no?

The whole civilization is based on utilizing the previous expertise. Thats how humans evolve. Rediscovering is the pointless, expensive and stupid. Unless no access due to sanctions.

They are all corrupt not just Erdogan every government is. He is corrupt or not he is doing excellent job or Turkey….

turkey and ukraine make the best tech. russia is dying, southfront is dying, censorship and communism will kill you all.

nice aerial target …..too big and slow its worthless against advanced air defences

I doubt they were planning to send it in vanguard

The Objective
Reply to  Theologos

Too big and slow? Well, they are big enough to carry 24 munitions – enough to wipe out an entire convoy of Russian troops in Syria in one strike mission alone. They are also stealthy enough to hover right above S400 and Pantsir batteries undetected. You should be careful of your overconfidence in Russian air defense systems. These drones are more deadly than Bayraktar TB2

We’ve seen all yous got in the SyRaq…….don’t talk big or we’ll knock yous up bitch. Fuckin deport yous back to Xinjiang. STFU already before I get irritated with your jihadist rubbish.

Not economically feasible to invest that much into something seasonal.

meanwhile inflation is rising in banana republic of turdonoid. Thats why turds being so desperated to be smuggled to central and western europe xD