Hayat Tahrir al-Sham (formerly Jabhat al-Nusra, the Syrian branch of al-Qaeda), al-Qaeda-linked Huras al-Din and other militant groups linked to them are refusing to leave their positions in the demilitarization zone, which is set to be fully established in the province of Idlib and nearby areas by October 20.

While the Turkish side is openly claiming that heavy weaponry have been withdrawn from the demilitarized zone, the attitude of Hayat Tahrir al-Sham and other radicals pose an open threat to the full implementation of the agreement.

According to some Syrian pro-government activists and experts, this situation may trigger an implementation of the military option to force the militants to obey. Nonetheless, Ankara is not interested in any advances by Syrian government forces in Idlib. So, it’s taking its own steps to have a military option against the “rebelling” proxies.

Over the past week, the Turkish Armed Forces have sent an additional group of troops and military equipment alongside with a new group of proxies trained in Turkey to the province of Idlib. According to reports, these moves are designed to strengthen the Turkish “observation points” along the contact line between the militant-held and government-held areas. In the future, if the situation goes out of control, Ankara may use this force to punish non-loyal militant groups and prevent further advances by the Syrian Army. 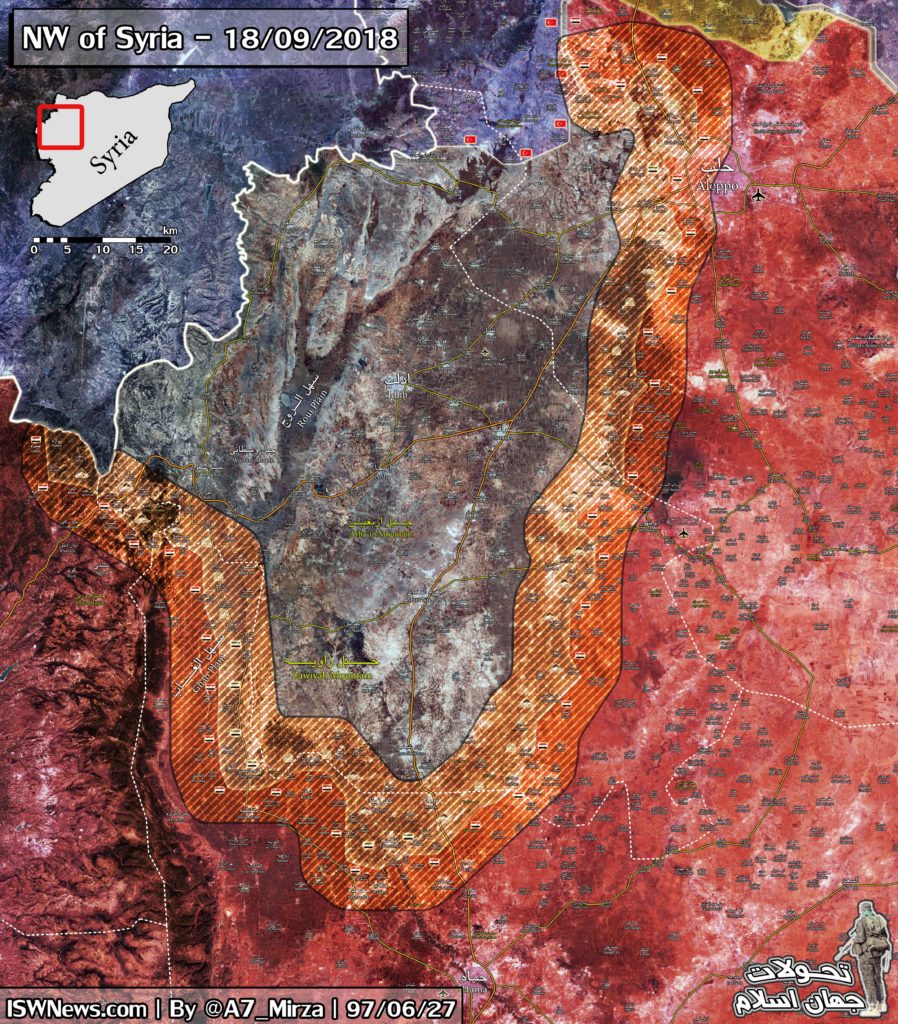 Syria-Russia(?) will have to send Turkey forces out of Syria land by force, otherwise Syria have to accept that it has lost this land forever (thanks to Russia, maybe).

Before Russia entered the war, the whole of Syria was lost. They had already divided it up, Israel was going to get western Syria, Saudi Arabia everything east of the Euphrates and Turkey the north.

Turkish forces in Idlib and Afin will be moved out by force if need be, and its doubtful they will try very hard to stay, the Kurdish “Sunnistan” that the US is trying to create is many times more of a threat to Turkish sovereignty.

Turkish territorial integrity will be more important than your dream of biting off half of a Syrian province.

We not there to grab a land . that is the only way we can protect our borders .when Syrian people strong enough.Then we can sort things out .at the moment we have to be there

today, although briefly, news appeared that Turkey had evidence that the Khassoggi murder happened inside the embassy, something that would pin saudia to the crime.

strangely enough, current news only refer to an inspection being made, but given the diplomatical status of the premises, i doubt that turkish police can perform a full search – at least before any possible trace is vanquished.

these people are professional murderers, and know exactly what to do to to leave no evidence.

USA is fine with Saudi regime as long as they buy US weapons.

My best guess, body was transported out right away in non diplomatic vehicle. = fish food.

if i have to say, i’d think they dissolved the body in acid and disposed through the liquid waste system.

Well at least you will get buried there.

keep dreaming. Soon you be losing also, what you think is yours.

How’s the weather in Hell Aviv?

Lol, it sounds to me that Turkey just grabbed part of the Syria without fight.

Thanks Putin. Who could expect this (sarcasm alert).

Ottoman Orcs are desperate to save their puppet Orcs! Centuries ago, slaves could own slaves. Today, Orcs can own Orcs!

They just keep sending more troops but those do NOTHING against terrorists, which is not so surprising since they are terrorist occupiers themselves. Just uniformed, dogs of the sultan. SAA has to be ready to push out the Turkoid invaders along with jihadist vermin.

What Exactly you fucking waiting for scum.just go for it and finished.saa army where r they ?

THEY are all ISLAMIST cocksuckers…..brothers…..

all conversations go like “brother here, brother there” Turkey is no longer the secular turkey it once was.Those times are over.Its a 100 % islamist country. What turkey is doing, is changing the demographics in the occupied areas, Idlib and Afrin.I have explained here before, that all these bs agreements are totally worthless.100% worthless. In afrin for example(and southfront has covered this already), the turks have widely succeded with the changing of the demographics.They have changed street names to turkish names.They have changed town names to turkish names.Only the turkish lira is allowed as payment in afrin area.In schools they changed the language, and have the picture of erdogan in ALL classes.etc… The fucking satanic jews have been doing this in palestine for 70 years.And look whats happening there in lets say the west bank.Anybody who knows the facts, will tell u hat everytime someone talks about the 2 state solution,be it russia or usa or eu, they rae lying big time.There is no 2 state solution POSSIBLE anymore.The jews have changed the demographics to that extent that a 2 state solution is IMPOSSIBLE now.From the practical stand point. Turkey is doing the same in afrin and idlib.In afrin its widely done already, and in idlib they need more time.thats why they constantly BREAK the agreements with russia.And they will continue to break these agreements.JUST so that nobody forgets.The agreement was the following… till October 15, 2018, ALL armed groups have to leave he 20km wide demilitarizey zone including the heavy weapons. Now its october 17, 2018, and neither the groups have left nor their weapons.On the contrary, several groups ie. al nusra, al zinki,turkistani group etc.. have been firing rockets , artillery and mortars at SAA and the civilians they protect. And by the agreement, if turkey doesnt attack these jihaid gropus , SAA is allowed too. just read that last fucking sentence of mine.how fucking rude of russia to sign such a bullshit.So the arab syrian army is ALLOWED to fight these terrorists(that have raped and murdered syria for years) only if turkey does not??????

all bs …and i´ve written about this bs from fucking DAY 1.And i remmeber very good how many smart asses here were all like ” u stupid, u zionist(haha me a zionist,,,,i want all SATANIC jews to die) this is agreat plan by putin,,so good that plan…will be so easy to finish them off all at once in one big basket………yeah these were all messages from smart asses here….so fucking smart…and what did i write “its insane for anybody to think that something good will comeout out of the turkish invasion in north syria, and its insane to let those jihadi terrorisz jew slave pricks leave their areas and go to iblib.you got hem corneerd, FINISH THEM OFF…..thats what it is in WARTIME…one does not let the enemy “fade away into the wind”, to REGROUP,REARM!!! Thats fucking common sense but not russia, here in syria,, lets make a deal here, a deal here, a deal there…I wonder how long putin would have lived if he were a general in WW2 and decided to make deals with the nazis …

Present time…. if i were SAA leadership, i´d put the ball straight into putins hands, by saying

“u wanted them their, u told us to trust u and the agreements with turkey, now u do the job in idlib”

thats what i´d tell the russians

Hey Turkey…GO..GO…GoOO…You wanted an Idlib-Agreement there you GO… HAVE FUN…