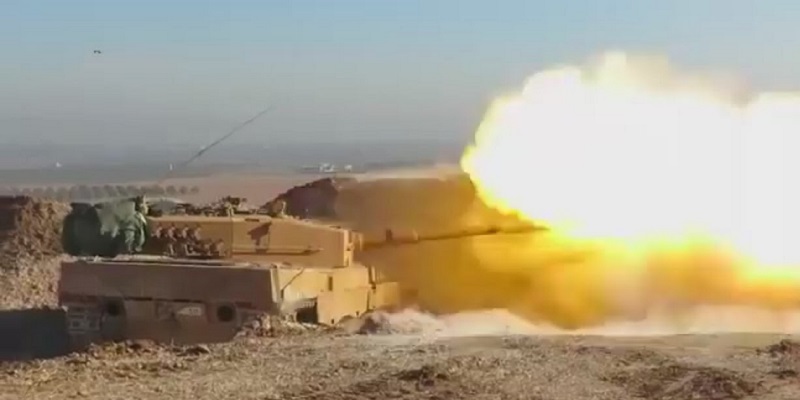 IMAGE: Turkish Leopard 2 main battle tanks is firing at ISIS targets during the battle for al-Bab

The Turkish military targeted with rocket and artillery fires, positions for Syrian government forces and their allies in the western Manbij countryside, according to the Syrian state-run news agency “SANA”.

“The Turkish shelling which targeted the points of border guards claimed the lives of a number of persons and wounded many others,” SANA reported on March 9, citing a military source.

The article does not provide the specific numbers of casualties among government forces.

On March 8, reports appeared that 8 members of the Syrian border guards were killed in the Turkish strikes in the area, but there was no confirmation or denial from the Assad government.

If Ankara continues its actions in the area, this will easily lead to a major escalation in northern Syria.

Why the hell attack SAA if our common enemy is Isis? Unless turkey doesn’t mind Isis, which I think they are actually helping

Erdogan’s mafia likes to trade arms for oil with ISIS. That’s why RU Su-24 went down in flames.

Turkey assisted Israel in creating ISIS, the whole point was to soften up the Syrians before the coming Israeli/Syrian war in which Israel is going to conquer the rest of the Golan-Heights and other territory from the Goyims that are native to the region.

Turkey doesn’t care what putin or the US deep state wants, they are only selfish and want to annex Northern syria and massacre the kurds. This is going to lead to an escalation and will not end good.

Turkey will be contained by US and RU soon and then they will care.

Turks-you can always rely on them to stab you in the back.

So, Turkey is killing Syrian soldiers on SYRIAN territory. What about sanctions for the agression,

I hope you have realized by now that there is no such thing as Syrian territory any more. All is up for grab thanks to US, RU, Israhell and UN. There is nobody in the world to guaranty the sovereignty of the Syrian state today. Sad situation though an understatement.

Currently it is so. But I lean on the official international country recognition: in the UN there is an Assad government representative, not anyone of FSA, YPG or someone else. And there are no legal sanctions of UN charged to official Syrian government, as well as there isn’t any UN warrant given to Turkey to penetrate Syrian territory.

Send some satan 2 to the bloody Turks.