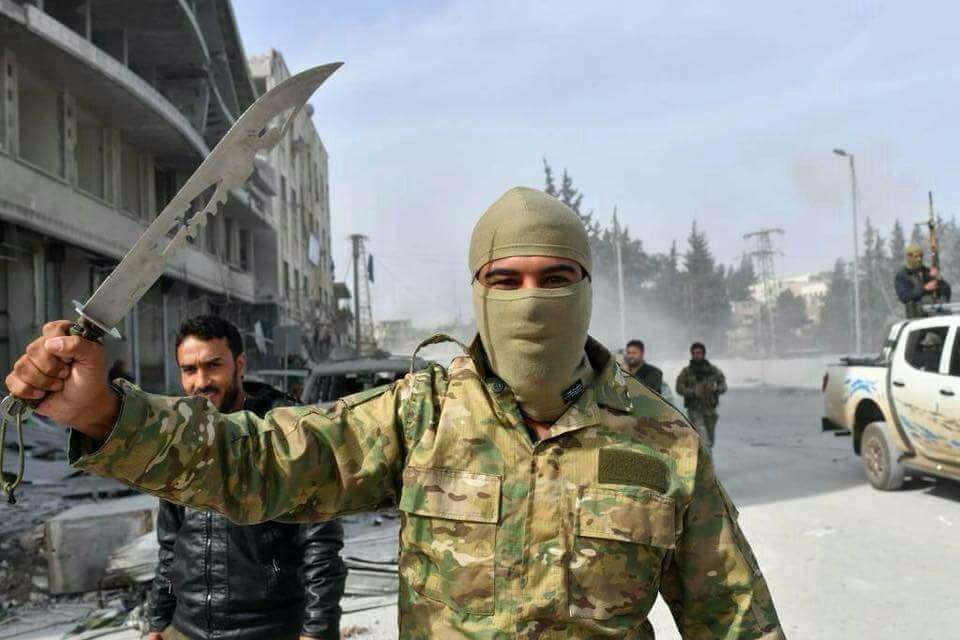 Meet the former US-supported FSA, now the Turkish-backed FSA, who have been committing war crimes in Syria for years.

Turkish forces have suppressed dozens of civilians who took to the street in the northern Syrian city of al-Bab to protest against the Turkish-occupation, Rear Admiral Alexander Karpov, the deputy head of the Russian Reconciliation Center in Syria, announced on March 3.

“In the locality of al-Bab, about 150 people went to a rally calling for the withdrawal of pro-Turkish units and the return of territories under the control of Damascus,” Kaprov said in a statement.

According to the Russian commander, five locals were wounded during the protest, which was “violently suppressed” by Turkish-backed militants.

Kaprov said that the protest was motivated by the humanitarian crisis developing in al-Bab city and other Turkish-occupied areas in northern and northeastern Syria.

The Russian Reconciliation Center’s statement was quickly dismissed by the Turkish-backed Syrian National Army. A spokesman for the faction said that the statement is filled with “lies” and “fabrications.”

The Turkish military and its proxies occupied al-Bab city after a battle with ISIS more than three years ago. Since then, the city has been in a permanent chaos.

Russia is clearly keeping an eye on al-Bab, and so do Syrian government forces. Any movement from the locals against Turkish forces will likely encourage Damascus and its allies to undertake more active actions to liberate the city.

Meaningless caterwauling from Assad.He shouldn’t interfere in another countrys internal affairs.This is family matter and we’ll sort it out.😃

lol……your family matter is in the Parsi prayer halls of mumbai on whether to continue to forbid or allow non parsi’s entry to the temples. Marriage outside the religious fold and the fate of the children of mixed marriages. Where you in mumbai brah and where these jihadi turkish guppu and wahabbi camel jockey no?…..lol…..come on brah, stop joking……lol

What are you blubbering Charlatan?Blocked.

these turks are total imbeciles

they are back stronger https://media2.giphy.com/media/QyM467AXnevT1ZExwC/giphy-downsized-medium.gif

stop joking doc…..lol…….quit hanging out with pakistani dalit, they showing you jihadi drama…..lol

but doc, you know they in $680 billion debt. Hillbilly slapped sanctions on them and their economy is bankrupt. Iran’s beaten them in the SyRaq. They can’t win and if they try anything funny, then Russia and Iran dismantle that country.

Only the weak and pathetic who like to dish it out but can’t take it in return block that that they can’t handle.. Probably doesn’t understand that we can all still see everything.

you see how he has dozens of ID’s here, trolling everyone…….

No not really. I see lots of new names coming and going but really don’t look too hard.

Me here too……no conversations with your captain obvious ID’s.

turkey and america are unwelcome in syria

Turks and Americans are unwelcome anywhere by most people.

The Khazars and the Ottomans need a deep cleansing :)

When a country allies itself with the USA, that is with isisrahell, and claims to be an Islamic country it lies because the two are not compatible, the proof is found when these countries, falsely Islamic, support the terrorism created by isisrahell and NATO for to kill innocent Muslims, and to steal their ancestral lands and the precious resources they contain. Any reference to Turkey and the fake Gulf Kingdoms is intentional.

No reason making “protests” during the var. If they want changes; they will need weapons, to be heard…

well old fart, if that “certain power” is Iran, I would definitely not get too much excited. Because Iran has problems defending themselves, so how can they defend others?!