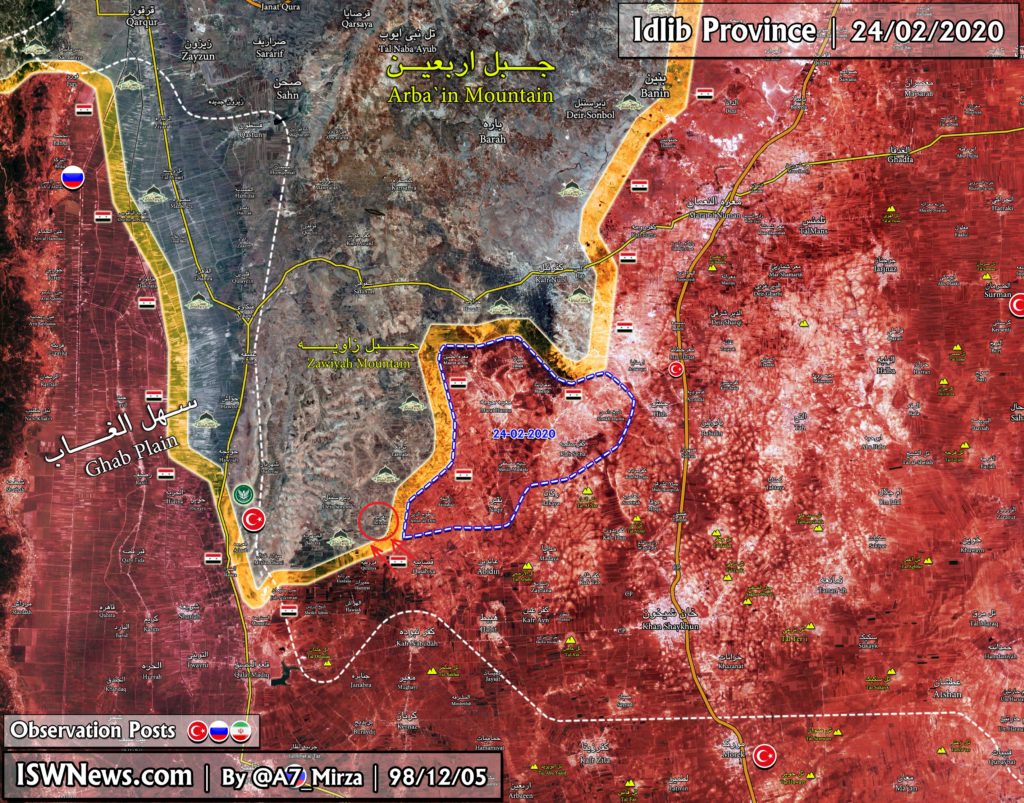 As Hayat Tahrir al-Sham (formerly the Syrian branch of al-Qaeda) and other Turkish-backed groups are struggling to consolidate their recent gains in Nayrab, their defense continues collapsing in southern Idlib.

It seems that the Syrian military is successfully exploiting the Turkish obsession with Nayrab to shorten the frontline south of the M4 highway. If the situation develops in the same direction, this village will cost the Turks the entire southern part of the Idlib zone.

fu*k the hts sub humans just captured san village south of saraqib after retaking neyrab they’re about to cut the m5 road wtf is going on here ffs the saa get your sh*t together already !!!!!!!

Do you have a source?

syriancivilwarmap.com and liveuamap confirmed the capture of san village near saraqib, the saa need to carpet bomb the sh*t out of that area before they cut the m5

Hahahaha no, they haven’t even entered Neyrab. No one is inside Neyrab. SAA withdrew and bombarded the town so the jihadis can’t afford the massive casualties it would take to enter and secure Nayrab. Please stop spreading fake news.

both southfront, almasdar news, syriancivilwarmap.com and liveuamap.com confirmed the capture of neyrab and both syriancivilwarmap and liveuamap confirmed the captureof san village south of saraqib im not spreading fake news … on the other hand the saa captured jabala, haas and basqala,…. the saa needs to level that area asap before they cut the m5

All the turkeys in idlib except one will be roasted. One turkey will survive to tell the whole story to erdocunt.

SAA must booby trap every single building at strategic villages with claymores,grenades and mines if they dont have enough manpower to guard them.

it brings al qaeda out of hiding so that russian warplanes can blow them up. otherwise entering further into idlib would be much heavier casualties for SAA

It seems that the SAA are now cleaning up from south to north (before from east to west, all along the M5). May be the front will progress like that till be near the M4, and then they will take all the M4, just as they have done with the M5.

Actually, that is exactly what has been long planned by both Russia and Turkey… Their agreements dating from 2018 call for the SAA and Syria to obtain and control all territory covering the M4 and M5 motorways including withdrawal of so called “terrorists” from that territory..

The issue is that the so called “terrorists” are not cooperating and are the ones that are fighting to try to prevent those takeovers.

Exactly as I have mentioned before. The SAA could also opt to close southern Idlib with a large pocket but seeing as the jihadis are focused in Nyraab, it’s better to capture the lot directly. M4 highway will be within striking distance when this pocket is liberated.

turkey waiting for their amrikan thanksgiving

I think the US DoD attitude Can be summed up in a February 25, 2020 report to the US Senate Armed Services Committee. The report can be found here:

Turkey is discussed on page 7. Note the US military will not comment on wisdom of policy choices but between the lines it is clear Turkey is critical to counter Russia in ME in the view of the US DoD.

S Melanson, did you happen to see this from the Rand Corporation;

https://www.rand.org/pubs/research_reports/RR2589.html Erdogan is not included.

I looked at the summary and it was very general overview with no discussion of underlying tensions among Astana participants or issues involving US support for Kurds. The DoD report to senate committee discusses directly. RAND does make clear US should make efforts to maintain relations with Turkey as a counter to Russian Aspirations in ME region.

The blow up in the ME will reveal if Trump will back up Erdogan, with or without conditions, or leave Turkey on its own. Turkey is pretty much committed to a military collision course with Syria and Russia that is escalating by the day. Putin is not in full control if at all as diplomatic dragging of feet tell me Russian military in drivers seat as they have had enough.

By the way, the summary discusses Erdogan so what did you mean by Erdogan not included?

that is not enough. also more bombs and fuel.

According to the “Nimr Tiger”, Kafr Nabl has been totally liberated.

I”m wondering how exactly the Syrian government will go about setting up authorities and administration after they defeat the rebels/terrorists/jihadist invaders. Does anyone have any details or sources that explain this?