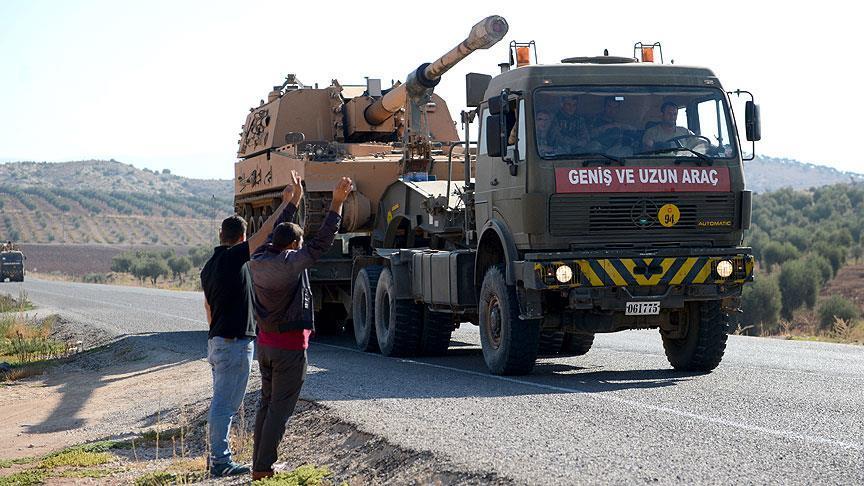 Turkish troops deployed in the northwestern Syrian region of Greater Idlib had been ordered to respond to any attack by the Syrian Arab Army (SAA) after coordinating with the Turkish-backed National Front for Liberation (NFL) and al-Qaeda-affiliated Hay’at Tahrir al-Sham (HTS), the Syrian Observatory for Human Rights (SOHR) reported on October 2.

According to the London-based monitoring group, Turkey also ordered the NFL and HTS not to shell government-held areas around Greater Idlib before informing its liaison officers.

The Turkish military maintains more than 60 posts, camps and bases throughout Greater Idlib. A day earlier, the SOHR revealed that the Turkish military deployed mortars and anti-tank guided missiles in these positions. Prior to that, self-propelled howitzers were deployed in the region.

According to the SOHR, Turkish artillery units are deployed in Greater Idlib as follows:

Russian President Vladimir Putin and Turkish President Recep Tayyip Erdogan failed to reach a new agreement on Greater Idlib during a meeting that was held in the Russian resort city of Sochi on September 29.

Official Turkey sources alleged that the two leaders had agreed to maintain the status quo in the region, where HTS remains the de-facto ruler. Nevertheless, some Syrian observers believe that the SAA is preparing to launch a ground operation in the region with support from Russia.

“Some of our European friends criticize us for deploying troops in Syria. However, this should please them. We keep people in areas we control. Only because Turkish soldiers are in Idlib, 2.5 million people are not fleeing the region,” said Kalin.

Kalin didn’t mention that the region is being ruled by an al-Qaeda affiliate, or explain Ankara’s long-term plan for the region.

A ceasefire agreement on Greater Idlib that was brokered by Russia and Turkey on 5 March 2020 is barely holding up. The situation in the region is spinning out of control. Yet, Ankara appears to be determined to continue shielding HTS, the NFL and other militias occupying the Syrian region.

Probably the deal is to let SAA and Russia bomb NFL and HTS but not Turkey and let Turkey along with NFL and HTS to bomb SAA and not Russia.

The turks spill their guts and finally admit they are actively supporting terrorist orgs including al-qaeda.

NATO is dysfunctional and USA is against Turkey right now.

“Kalin didn’t mention that the region is being ruled by an al-Qaeda affiliate, or explain Ankara’s long-term plan for the region.”

Bullshit. Assad should sit down at the negotiating table with the opposition or risk war with Turkey. But Russia/Assad want to take Idlib by force and reinstate dictatorship. This is highly highly unlikely to happen. If Russia thinks that Turkey is another Ukraine, then Putin is welcome to start this war. But it will mark the end of Russia’s presences on Syrian soil and the Mediterranean.

You are delusional,don’t get above your station in life.

We’ll one day find out. USA Taliban Muslims are backed by a much more powerful force than the physical weapons you see. This has always been the mistake of our enemies.

Taliban were backed by Iran and Pakistan. But now if Tajiks invade with the help of Russia they will lose.

Open NATO alliance with terrorists – NATO is not engaged in a war ON terror, rather a war OF terror against selected non-compliant states marked for regime change operations. These US regime change operations are formally approved by US Congress under policies of US longstanding National Policy for Endowment of Democracy Program. This is an annually approved, formal and well funded, US program of organized subversion and violence against entire states.

France has said that NATO is obsolete. This is correct. The new forces are Europe and Islam.

Is the Turkish occupiers actually threatening Syrian on their own territory? are they that stupid? SAA and the Russian fighter pilots will sort them out real soon

The Objective
Reply to  cheryl sanchez

How soon Syrian mujahideen waiting for them