On March 5, the Turkish military established a new “observation post” in the western Aleppo countryside, according to the Baladi News outlet.

“A military convoy of the Turkish army, consisting of several military vehicles, personnel carriers, battle tanks and soldiers, took position at dawn today, Thursday, inside the town of Kafr Nasih in the western countryside of Aleppo, and established a new observation post,” the pro-opposition outlet reporter said.

The establishment of the new Turkish post came amid heavy clashes between Turkish-backed militants and the Syrian Arab Army (SAA) in northern Aleppo. 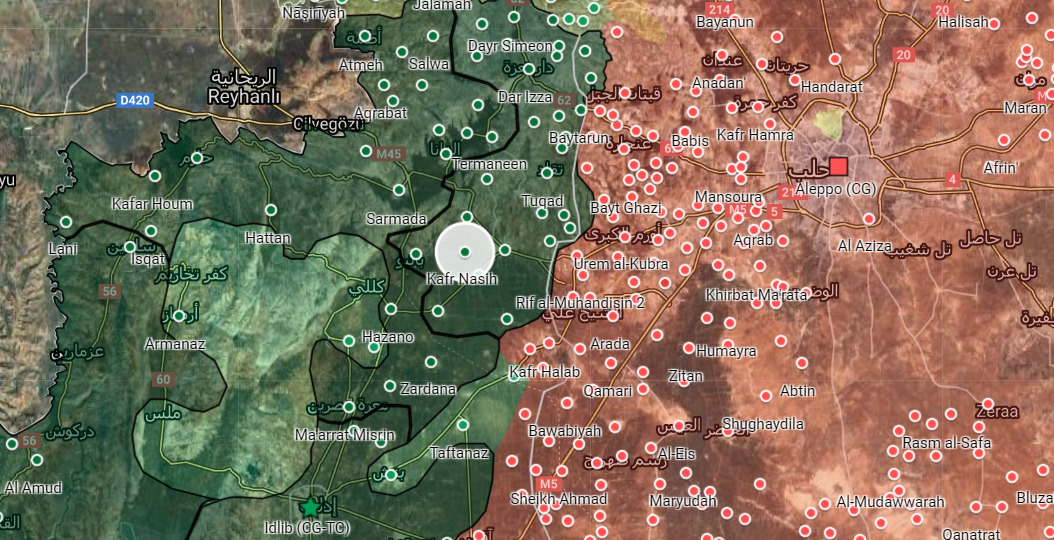 A day earlier, Turkish-backed militants launched an attack in the region with direct support from the Turkish military. In the first hours of the attack, the militants made some gains. However, the army repelled the attack later, recapturing all lost positions.

Several Turkish “observation posts” were established in western and northern Aleppo in the last few months. Most of these posts were set near the towns of al-Atarib and Darat Izza.

These posts, which are supposed to “observe the situation in Greater Idlib, have become fire support positions. Rocket launchers, howitzers, and even anti-aircraft weapons were deployed within the “observation posts” over the last few months to support the remaining militants in the region.

Destroy that Erdogan made Turkey terrorists merged observation base.Destroy before drones attack from that spy outlet.No one knows were Turkey forces are.If Erdogan withdraw and Syrian forces reclaim Syria then the refugees can quickly leave Turkey and come back to Syria for resettlement. Instead of transported to Greece border by Erdogan special terrorist merged forces and force with guns to run and jump over Greece border and get shot.Or liberate Turkey from Erdogan case closed he is already old and mentally disturb.

This is not about refugees, it is not about Syrian territory, this about Turkey not knowing what to do with 20,000 to 40,000 Jihadis that would spill into Turkey. The EU, US, Israel and Gulf states created a Frankenstein (again!!!) and again it has and will turn on them. the deal with Putin will be a Ceasefire in place, and “Get those fucking terrorists out of Idlib. You have six months” It was obvious Turkey panicked as the Syrian Army moved forward and that’s why Turkey moved so quickly and now apparently clumsilley. The terrorists have to be liquidated there is no other answer. Turkey has been well and truly left holding this baby – all Turkey’s fair weather friends have fucked off and rightly Turkey is pissed off. Why do you think he is threatening the EU with refugees – he is saying to them, “I thought we were all in this together – you set of cunts”

Turkey brought them in … that’s there PHUCKING problem

I agree with you. However the Jihadi’s are certain to ignore any de-escalation agreement as they always have done.

In my opinion a 6 month of 6 hour agreement will be broken immediately. President Putin realises this scenario I would think, and either Erdo re-deploys his best drug fuelled monsters to Libya or as agitators against Greece and the EU, so that remainder in Idlib can be killed or captured by the SAA and Idlib liberated, or he carries on invading Syria directly.

The question of course is, ‘How can Erdo save face’. Arguably Erdo cannot de-escalate and with Russian forces backing Syria in the fight against UN proscribed terrorists, Erdo cannot win.

If Russia packed up and left Syria to her fate, NO nations who are currently supporting and sympathetic to the courageous actions of Russia would come to Russia’s aid when the Jewhadi’s reach the Russian borders.

Erdo needs to have a ‘heart attack’ and die for this Turkish rape and plunder spree to cease in my humble opinion.

With a slight rearrangement of furniture of course.

All of north Aleppo was already invaded by Turk-led terrorists, FSA/al-Qaeda types, they kicked out some 400.000 Kurds who refused to let the SAA in during operation Euphrates shield in 2018, that was far more than enough, but Turk-led terrorists then also entered Hasakah province last year due to the treacherous Kurds and US Zioterrorists. Not a sinlge inch of Idlib must be given to Turks, because it looks like westernmost Aleppo was already ceded.