On April 13, the Turkish Army and Turkish proxies launched an attempt to clear the M4 highway in southern Idlib from supporters of Hayat Tahrir al-Sham (formerly the Syrian branch of al-Qaeda) and other radical groups.

The Turkish attempt, most likely carried in order to demonstrate that it’s trying to implement the de-escalation deal reached in Moscow, faced a strong resistance among supporters of Idlib radicals. According to some reports (and a video above), even a firefight erupted in the area.

Turkish police are trying to break the sit-in on the M4 international road. pic.twitter.com/JaMWQY89Gj

Under the March de-escalation deal between Turkey and Russia, Ankara had to neutralize radical militants in the area of southern Idlib and a security zone was set to be created along the M4 highway there. After this, Turkish and Russian forces had to launch joint patrols there. Nonetheless, this has not been done yet and ‘joint patrols’ are being conducted along a small chunck of the M4 highway near Saraqib only. The rest of southern Idlib remains in the hands of terrorists. Turkey does not want to launch a large-scale effort against them because the same groups are the core of its proxies in the region. At the same time, Ankara has to demonstrate somehow that it’s committed to the agreement. So, it regularly makes shy attempts to reopen the M4 highway there. 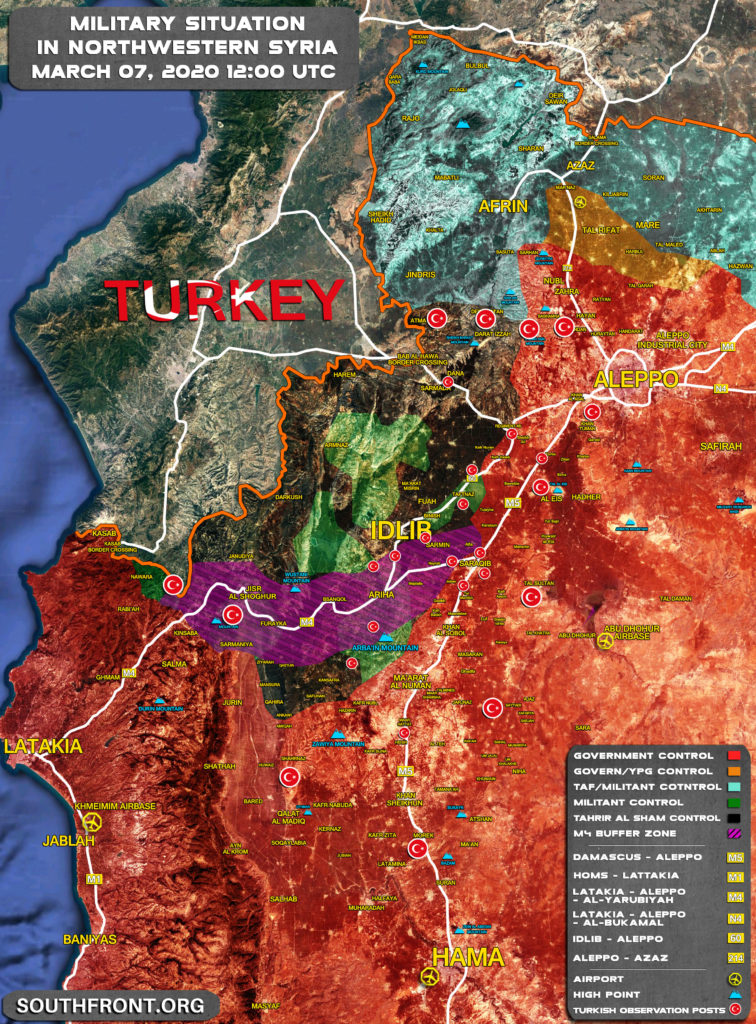 Pepper spray, rubber bullets, confiscating bulldozers and locking up terrorists. Simple and Erdogan knows perfect how he can terrorise people and keep them restrained.

Only about half the Turks follow the AKP and the brotherhood, the other half are a lot smarter, hopefully you’re one of the smart ones that like freedom and democracy. Democracy loses out when religious oppression is mixed in, freedoms are lost when religion overrules everything else. So the Muslim Brotherhood is the whole world’s enemy as well as Turkeys, and hopefully more Turks will start realizing that soon and kick that madman Erdogan and the MB out, otherwise Turkey will end up having the same sort of political system as the Iranians have now, that’s what the MB’s model of democracy actually looks and works like, and so does Isis’s system of democracy. So do you want the same sort of system in Turkey, I hope you don’t, hands chopped off for theft, heads chopped off for adultery, no pretty girls because they have to cover themselves from head to foot and you can’t see them. I’d be in big trouble if the MB took over my country that’s for sure. I like looking at pretty Turkish girls who don’t mind me looking at them, I wouldn’t like to see them forced to cover themselves from head to foot if they didn’t want to, but that’s what the Muslim Brotherhood want, and Erdogan’s the one facilitating the new system. Unfortunately all Turks are tarred with the one brush now, so unless you state your political stance clearly most people will just assume if you’re Turkish you must be pro Erdogan and pro Muslim Brotherhood, even if you’re not.

Hahaha!!!…so, I’ve got you!..generally, cavemen like you react violently and without any argument when confronted by truth…

In 2 days it will be exactly a month since Turkey failed and keeps failing to meet it’s part of the deal on the M4 highway.

Well, apparently the circus is back in town…

And the circus is open for everyone, even in the days of lockdown ?.

So let me get this straight: The Turkish forces are so inept, that they got their asses kicked by the green rats? Am I missing something, or is my conclusion correct? If the Turkish forces can’t handle fighting the rats, then they won’t be able to handle the great SAA! ??

Erdogan is using Putin for idiot

LOL, HTS are not just resisting the Turks on the highway and causing problems there, they’re also arresting heaps of prominent NFL [Turkish backed] commanders as well, and the NFL are also doing the same thing to HTS commanders, so there’s going to be some serious torture happening tonight. The Turks and the Syrian opposition are the human hosts and the terrorists are like a virus, first there’s the feeling ill stage, then a fever starts as the virus starts to win, and then either the virus wins out and the host dies or the patient recovers and they kill off the virus completely, and I think the Turks are at the feeling ill stage right now. So will they get even sicker and develop a fever, I certainly hope so, and if the patients ends up on deaths door and it’s looking like it could go either way, Dr Assad should start immediate surgery to save the Turkish patient, he should cut out that infection called Erdogan and help save the Turkish people. So he could help save Idlib and Turkey at the same time if he plays his cards right, but he needs to accept someone else’s help to do it, and all their money too. Arab league peacekeepers are needed in N Latakia, N Hama, N Idlib, W Aleppo, Ar Raqqah, N Deir ez Zor , and Al Hasakah, that’s the medicine Assad needs to kill off both Erdogan and the US presence in northern Syria, that’s the only way the Turks and US will ever leave. When both parties are given absolutely no reason to remain in Syria they’ll both have to leave, and only the Arab League can do that for Syria now, they are the only ones that can take away the Turks and US’s excuses to be there, otherwise the international community may as well start redrawing the official maps of Syria, Turkey and the US right now. edit, Iran too.