On February 21, the Turkish Army and its proxies from the Free Syrian Army (FSA) captured the villages of Qara Baba and Kirbet Siluki in the Rajo district northwest of the city of Afrin, according to Syrian oppositions sources. Turkish forces also advanced north of Afrin and captured the village of Vergan.

The Turkish Anadolu Agency reported that the Turkish Air Force (TAF) had targeted several positions of the Kurdish People’s Protection Units (YPG) around the city of Afrin. Over 65 YPG fighters were killed in the TAF bombardment, according to the report.

From its side, the YPG press announced that YPG fighters had repelled several attacks of the Turkish Army and the FSA on their positions inside and around the center of the Jandaris district west of Afrin. 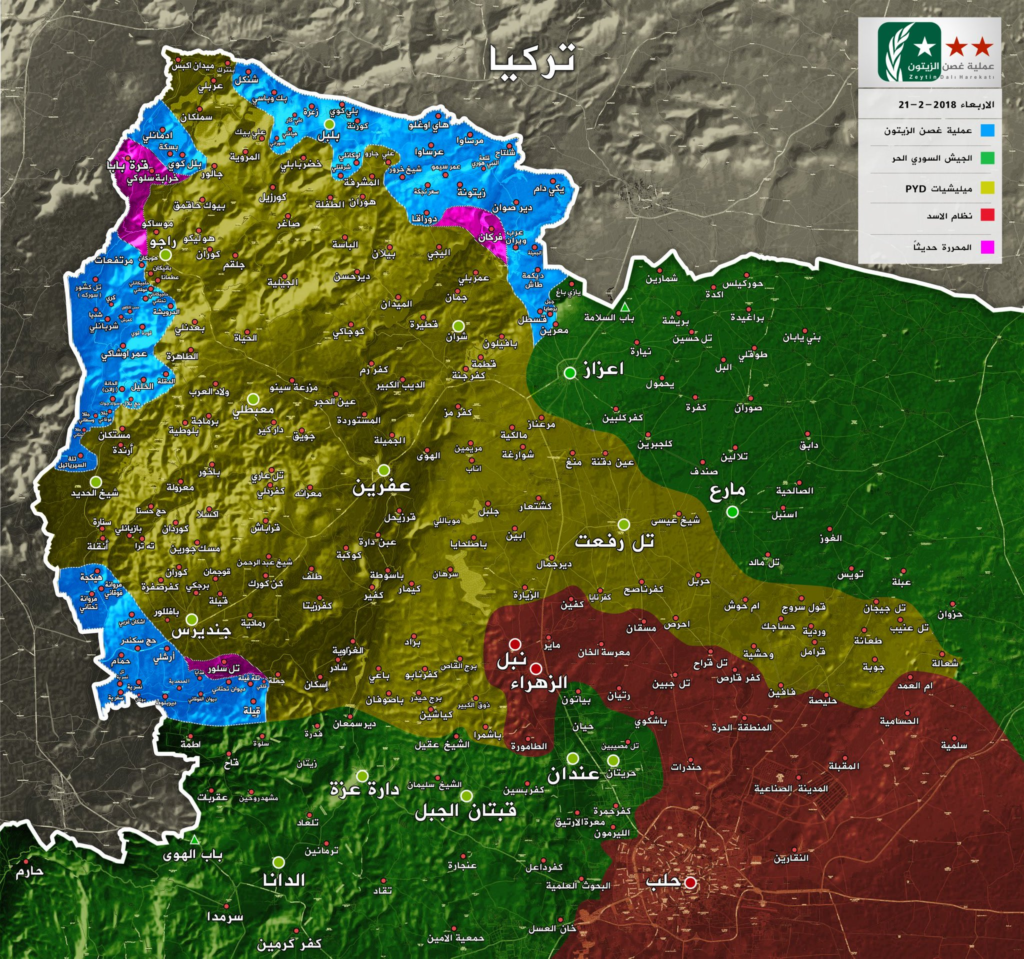 In a related development, the Syrian Arab News Agency (SANA) reported that a second batch of pro-government forces had entered Afrin area on February 21 supporting the YPG there. According to a Kurdish source, the YPG also sent new reinforcements to Afrin from its areas in northern Syria through the government-held areas.

Pro-government forces, mainly of the National Defense Force (NDF), began deploying in the Afrin area on February 20 under an agreement between the YPG and the Damascus government.

Gℴogle paying the people 97 dollars hourly to complete small jobs from the comfort of home … Work for few hours daily and live happy greater time together with your circle of relatives . Any person can join this official post!!last Saturday I got a brand new Mini Cooper after just getting $14625 this last month .it seems my favourite-job however you may no longer forgive yourself if you don’t take a look at it.!ce551i:➣➣➣ http://GoogleWorldWorkAtHomeBusinesses/earncash/99$/per-hour… ♥♥m♥m♥♥n♥♥♥d♥x♥l♥♥♥r♥♥k♥u♥♥♥e♥♥g♥v♥♥♥r♥♥♥m♥♥m♥♥♥h♥♥b♥a♥♥z♥♥♥h♥c♥v♥p♥♥h♥o:::::::!ax703p:tjypf

Assad and Putin got HUGE SPANKING from President Erdogan!

Turks did nothing and just like their proxies and fight like them and to be honest the SDF there with no real heavy weapons and not being so cooperative with the US as the other SDF are.That’s what cost them to have the US betray them in the long run for Turkey is a more valuable ally.

You must like the photo assuming it’s Syrian you would be mistaken or do you know where the photo is from, you should learn to research the photo before using it .

Casulty figures are far too high to be believable. Sounds like people counting from far away