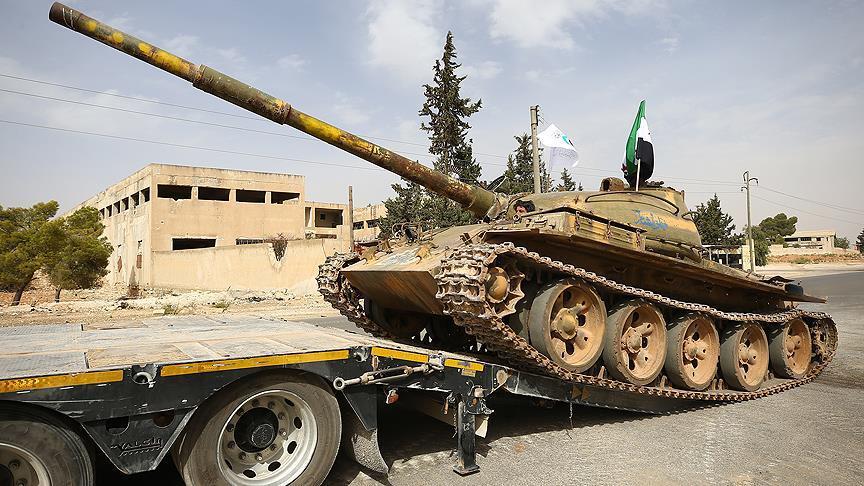 On October 10, the Ministry of Defense of Turkey announced in an official statement that a demilitarized zone had been established around the northern Syrian governorate of Idlib. The defense ministry stated that the withdrawal of all heavy weapons from the zone had been completed.

Last month, Russia and Turkey agreed to establish this demilitarized zone as part of a wider deconfliction agreement on Idlib. In compliance with the agreement, Syrian opposition armed groups began withdrawing their heavy weapons from the zone few days ago.

Hours before the Turkish announcement, Russia’s Foreign Minister Sergey Lavrov said that the establishment of the demilitarized zone around Idlib is “progressing quite well” and praised Turkey’s efforts to implement the agreement within the agreed-upon timeline.

“The deadline for demilitarized zones to be fully functional expires on October 15. A day or two do not play any role, in any case, the quality of these works is more important,” Lavrov told reporters at a news conference in the capital Moscow, according to the Turkish Anadolu Agency.

The Ministry of Defense of Russia has not commented on the Turkish announcement so far. This may mean the demilitarized zone has not been fully established so far. one of the possible reasons is that radical groups like Hay’at Tahir al-Sham (formerly Jabhat al-Nusra) are yet to announce their stand on the deconfliction agreement.

Its not yours, your just keeping it warm.

they are cousins so dont surprise you much if they do. Both come from the same khazarian roots, they just now fighting whose the real boss among them. Why you think their national hero as well the one who created modern turkey, was a queer zionist? unless you dont know their history so you are unable to put the dots together.

Typical Greek idiot. Our hero did you gd and proper.thats why you run ?‍♀️ away .with out fighting

no you just a turk who dont know his ass from second base. Ataturk what was it ? A jew from Thessaloniki. A queer who create you and neoturks. You name your self turks actually the ones who took Byzantium name them selves turks but all come from khazaria after her destruction. Learn historical fact kid and stop been an idiot by choice.

And I am not here to teach you history but is very pathetic and pitiful when one refuse his roots and history as you did with your comment and try to steal other nations history. And now you have a Greek for a leader a genitsaro who also refuse his roots and will lead you to your doom.

Now go learn whom you are.

Zozo Dalmas was one of the first Greek divas. She started her career in the Greek city of Salonika back in the 1920s and she soon became an important actress and well-known operetta singer. But above all Zozo was one of the most beautiful women who lived in the Mediterranean area back then and her beauty helped her to become famous in Greece, Turkey, Syria, Cyprus and Egypt over the years.

When she was 20 years old she appeared in a central theater in Constantinople. One night Mustafa Kemal Ataturk, the famous founder of the Turkish Republic and its first President, happened to be in the audience and immediately fell in love with her. He courted her with flowers and gifts and they soon became a couple. Kemal spent a lot of money to please Zozo but the truth is she was more interested in the man than his power and wealth. Once she took a pair of scissors and cut-off the picture of Kemal’s face out of each and every Turkish banknote that he dared given her because as she told him “it is the only thing worth keeping out of this stuff!!”.

Turkey is outplayed again and again, this time proving that they are in control of the terrorists, without a single argument to deny it.

of course lol, where is your idlib operation which you were barking last month, turkey won, not you :)

here’s the zionist discord putter. to be treated with severe prejudice.

Only if they survive the storm is coming and they will not you too stupid to understand what is coming for you. But then again you never been smart.

Its too early to say who “won”.

Its nice to see turkey compling with an agreement, israel and usa could learn a thing or 2.

You cant deny that this deal has shut up us uk and france.

This was a very effective way to shut out the west of a solution.

Im still upset of turkeys role on this war but at least they recognize 1. They looted all they could from northern syria, so stop now. 2. Russia is not to be messed with. 3. Syria will reclaim all its land, turkey has now chosen a more peacful path. 4. Turkey has recognized that the best way to solve the migrant crisis is to bring peace to syria. In another era (2015) turkey used the migrants as a cudgel against europe, wich is wrong on so many levels.

So its easy to proclaim turkey has “won”. I say it aint over yet.

But i hope the turkish people are starting to see who the real ennemies are. And its not your syrian brothers, its not your shia brothers either.

Its hard not to see a turkish victory. After all the terrorists werent wiped out.

Who did it say that ? So, do not believe it. Never trust Turkey since it is a NATO member and terrorists supporter.

Gastavro Russia declared did first all clear then turkey. Now swallow it

you confuse politics with reality?

He has been confused all his life Promitheas.

That is the truth

Not so fast Turks, Russia is double checking. The Turkish supported NLF are constantly attacking the Syrian forces from the demilitarized zone…….what is Turkey doing to avoid it…..nothing.

turkey already is making deals with the americans and this love story with the russians it will be very short lived. Soon russia need to chose who her real allies are and who her enemies and is nothing they can do about that part, since are not the only players in town.

turks are notorious about their double dealings and backstabbing.

Entire Idlib should be demilitarized, free from Turk terrorists

no entire Syria must come under the control of syrians. Is their homeland none other has the right to be there.

Lupus .turks protecting there borders.which Assad can’t do it at the moment he got no army left. What he got is scumbags from different countries Dying for nothing

It is funny that they claim that when all reports show HTS hasn’t moved an inch.