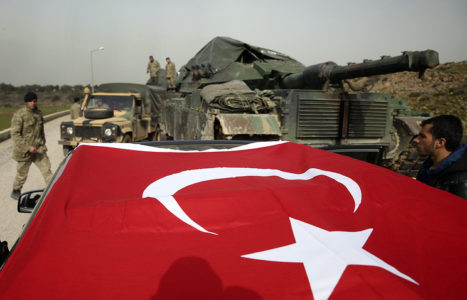 On January 29, Turkish National Defense Minister Hulusi Akar stressed that his country has finished all preparations for carrying out a new trans-border operation in Syria, Haberturk channel reported.

“The Turkish Armed Forces have ended all preparations within the scope of employment. We will carry out all the necessary actions in Manbij and in the east of the Euphrates in due time,” Akar said.

On December 12, 2018 President Tayyip Erdogan once again declared that Ankara intends to start a military operation against Kurdish armed groups in northeastern Syria. Ankara describes the Kurdish People’s Protection Units (YPG) and their political wing, the Democratic Union Party (PYD), as a Syrian branch of the Kurdistan Workers’ Party (PKK), which is outlawed in Turkey.

Turkey makes claims about a nearing third military operation in northern Syria on a constant basis. However, so far, these claims have not turned into reality.

The previous two Turkish military operations – Euphrates Shield and Olive Branch – took place in the northern eastern part of Aleppo province. As a result of them, Turkey and its proxies seized the border area from the Afrin region to the western bank of the Euphrates River.

ONLY TURKS CAN LIBERATE SYRIA FROM TERRORIST. NOBODY ELSE CAN DO

One small problem: they bring the terrorists in. smartguy

Then how come the only areas with terrorists in them are along the Turkish border and has Turkish army observation posts in them?

They could starting cleaning up the shit they creatzd in Idlib, al bab and Afrin

Tayyip’s next operation will be shuffling his parade armies back to the west now that the SDF has defeated ISIS in their last stronghold.