On October 24, Turkey’s Defense Minister Hulusi Akar said during an interview with the Anadolu Agency said that a large number of heavy weapons and radical militants were cleared from the 15-20 km demilitarized zone, which was established around the Syrian governorate of Idlib under the Russian-Turkish deconfliction agreement.

“Turkey will never allow a terror corridor to be established in its south,” Anadolu quoted Akar as stating.

In the interview, Akar also revealed that he will discuss several matters related to the deconfliction agreement on Idlib in an upcoming meeting with his Russian counterpart on October 27. Despite Akar’s claims, local observers believe that most radical militants are still operating within the demilitarized zone. This was demonstrated earlier, when a coalition of al-Qaeda-affiliated groups attacked positions of the Syrian Arab Army (SAA) from inside the zone.

Earlier this month, the Turkish military claimed that all heavy weapons had been withdrawn from the demilitarized zone. However, the militants, including Turkish-backed elements, continued to use such weapons in attacks against the SAA.

Russia agreed to extend the timeline of the declination agreement, which indicates that Turkey is working hard to implement the agreement. However, this task may take much longer than expected.

The only thing Turkey is “working hard” at is protecting their Turkroach terrorist mercenaries.

Russia and Turkey are dragging the cat by its Tail… Dragging time, waiting for November 6 to pass.
Indeed, the Turks are Dangerous… I agree.

I don’t know why Southfront insist on publishing this inaccurate map. The DMZ is not 50/50, it is all in the rebel held area, which is one of the reasons some of them are still bitching about it. According to the plan, the entire M5 highway is supposed to be inside the DMZ. So please, spend a couple of the $$ I donated, and make a new map.

Ronald
Reply to  The Saint

Your observation may be correct, but other than, that it is an Excellent map.
Want to thank all at South Front for all your work.

abuqahwa
Reply to  The Saint

If you draw a line between the red-purple coloration/shading this represents approx the outer perimiter of the FEwZ (Enemy de-militarized Zone). See my map post.

This is like we get rid of entire cancer from some organism, but some doctors decide to keep a part of it still infected.
This is exactly what Turko-savages does.

The right translation of Turkey statement is:::: Few radial militants have withdrawn from demilitarized zone.

At the moment the perimeter , depth, and location of the OPs and patrol areas are not fully clarified. My map shows rough locations of the 12 x Turkish, 10 x Russian, and 7 x Iranian OPs 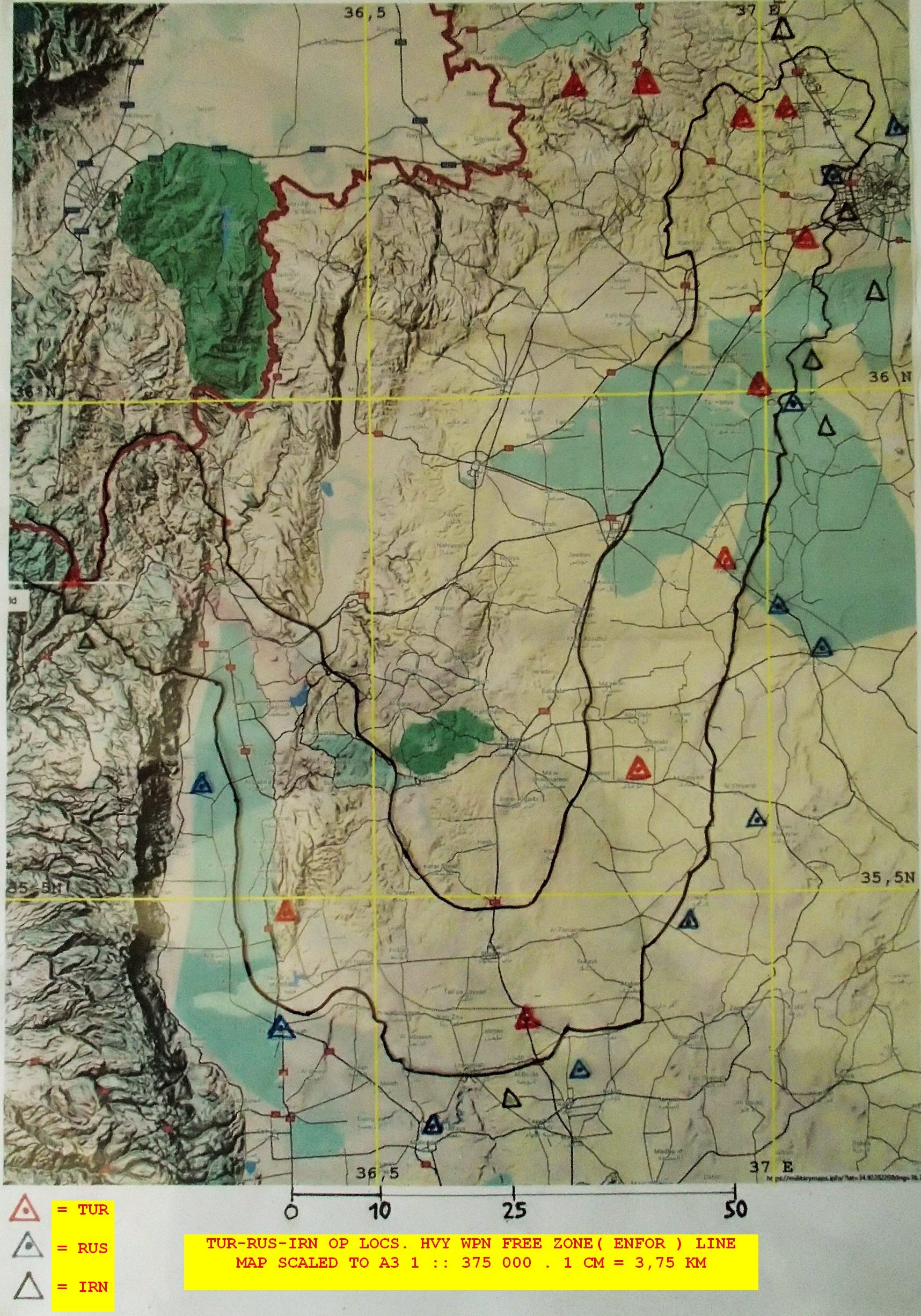 . Noteworthy is that the Turkish positions are well established, fortified, and supported and actually are more like company sized FOBs while the Russian and Iranian are just passive OPs , none more than platoon size. Note also that the M5 MSR from Saraqib south to 10 km short of Khan Sheikhoun lies OUTSIDE the perimeter and hence under the control of the enemy, HTS or the laughably named National Liberation Front – NLF !! of ex-Faylaq ash-Sham mercenaries.

Open the road between Hama and Turkey.

Turkey has done far more than I believed. Still do not trust them but worth giving them more time as long as they are making progress. Both Russians and US know exactly what Turkey is up to, we do not. Wish Assad would refocus on ISIS first then come back to fighting Turkey. Why not take out the weakest, ISIS, first. Major victory for Assad and big boost for Syria. No one will get in Assad’s way when he goes after ISIS.