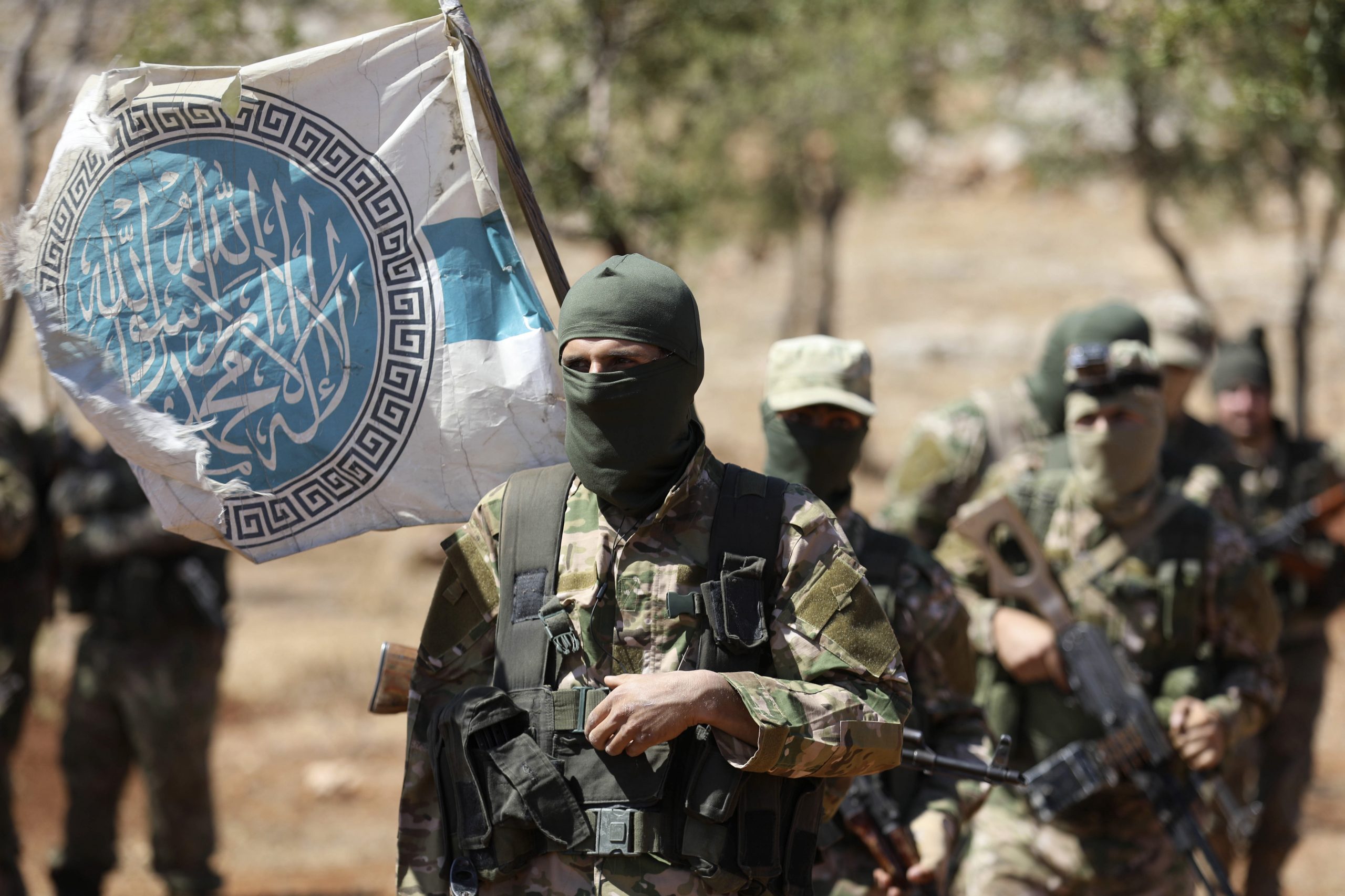 A correspondent for Afrinpost has reported that in the occupied city of Afrin two offices have been opened with the purpose of recruiting ‘volunteers’ to go to Azerbaijan. According to the report, the recruitment centres are located in Amir Ghobari School, and Azhar Afrin School. Other agencies are also citing statements from militants claiming Turkey has been recruiting mercenaries to go to Azerbaijan for some time.

The Syrian Observatory for Human Rights has claimed that Turkey transported around 300 militants from the Brotherhood militia, the vast majority of them from the “Sultan Murad Division” and “Sultan Suleiman Shah Brigade” known as (Al-Amshat), from Afrin towns and villages. They were reportedly told “The destination will be Azerbaijan”.

The Observatory added that Turkish military recruiters informed the mercenaries that the goal of sending them there is to protect border posts, and that they would be paid a sum of $1500-2000 USD. LINK

Separately, The Guardian has also reported that rebels from Syria’s Idlib province are being recruited by Turkey to fight in Azerbaijan’s conflict with Armenia, citing information provided by several of the militants.

Idlib is the last major bastion of the Turkish-backed militants in Syria. The recruitment drive for fighters willing to go to Azerbaijan began a month ago, three rebels told the Guardian’s Bethan McKernan.

Two brothers from Azaz said they had been summoned to a camp in Afrin on September 13 and told by a commander in the Sultan Murad Division that three- or six-month contracts were available “guarding observation posts and oil and gas facilities” in Azerbaijan for 7,000-10,000 Turkish lira a month.

That works out to roughly $900-1300 a month, and is considerably more than the monthly wage of 450-550 Turkish lira a month ($57-70) that Turkey pays the militants to fight against the government of President Bashar Assad.

“Our leader told us that we won’t be fighting, just assisting in guarding some areas,” said one of the men, whom the outlet named as Muhammad. “Our salaries aren’t enough for living, so we see it a great opportunity to make money.”

“There are no jobs available,” added his brother, Mahmoud. “I used to work as a tailor in Aleppo but since we were displaced to Azaz, I’ve tried many times to practise my craft but my family and I can’t earn enough.”

It was implied that the militants would be taking the job, though they could not say what exactly it entailed, for how long, when they were expected to leave – or even the name of the Turkish security company officially hiring them.

Another militant said that he and 150 other men were summoned to Afrin on September 22, but then told their departure had been delayed.

“When we first started being offered work abroad in Libya, people were afraid to go there, but now there are definitely thousands of us who are willing to go to either Libya or Azerbaijan,” he told the Guardian.

Reuters also reported the recruitment of Syrian militants on Monday, citing two fighters who had fought for Ahrar al-Sham jihadists, and volunteered for Azerbaijan after being promised $1,500 a month.

“I didn’t want to go, but I don’t have any money. Life is very hard and poor,” one of the militants told Reuters. The agency said it could not independently verify their accounts.

Turkey has previously been accused of sending Syrian militants to Libya, to fight for the Turkish-backed government against the Libyan National Army of General Khalifa Haftar. On Monday, the Armenian ambassador to Russia said that around 4,000 militants from northern Syria were sent by Turkey to Azerbaijan, as fighting broke out over the disputed region of Nagorno-Karabakh.

An aide to Azeri President Ilham Aliyev dismissed those claims as “complete nonsense” and “another provocation from the Armenian side.” A source in the Turkish defence ministry likewise told the Guardian that Ankara “does not deal with recruiting or transferring militiamen anywhere in the world,” but would not go on the record.

The Guardian cited unnamed sources in the Syrian National Army as saying that a first group of some 500 Syrian militants has already arrived in Azerbaijan, including senior commanders Fahim Eissa of the Sultan Murad Division and Saif Abu Bakir of the Al Hamza. The UK-based Syrian Observatory for Human Rights claimed as many as 1,000 fighters could be headed for Azerbaijan. The Guardian said it could not verify either of those claims.

Some of the men who went to Libya said they had been told they would be working as security guards, but ended up fighting on the front lines instead. They also said their commanders would take up to 20% of their wages. LINK

The ultimate solution to all this chaos is if Russia captures Idlib…then it will be the end of turkish recruiting grounds and war in Libya, Syria and armenia will come to an end once the cannon fodders r gone…Turks civilians wont allow bodybags after financial disaster heralded by Erdogan….Russia now must go decisive in Idlib

They can now recruit from both Syria, and Libya. Next stop NK.

The SAA, Iranians and Hezbollah were on the verge of victory in Idlib early this year, but Putin for some unknown reasons cut a deal with Erdogan, much to the chagrin of Russian military. Hopefully, this time it would not happen.

Russia needs a better leader than Putin, if it ever intends to survive as US and NATO ring closes in.

Middle east christians must come along together and form a greater christian nation to protect themselves against dis merciless Islamic onslaught….SDF, coptic christians, aethists, yazidis must fight against turkey and sunni salafists and get rid of dese bastards

You gone deal with China and shut up

The pay is not much though, an oil country could afford to pay more. I bet it is a barter, gas for Turkey in exchange to Private Military Contractors.

It could be that Turkey is using Azerbaijan to stir up trouble on another front, in addition to Syria, Libya and Greece.

I think that Georgia might help Armenia because they know they might be next on Turkey’s list. The again, Georgia isn’t happy with Armenia’s other natural ally, Russia.

I had some hopes pinned on Israel selling Armenia weapons, but Azerbaijan is important for them despite their friction with Erdogan.

The Turks are disgusting manipulative cowards who are killing the Arabs for their own ends, the Azeri cowardly military like the Saudis is now relying on Syrian and other Salafist brainwashed cannon fodder to die in suicidal war as Armenians have proved over and over, that corrupt Azerbaijan will never achieve any goal or a inch of Armenian territory.

Armenia better get its act together or NK, if overrun, will become their own version of Idlib— complete with separatist recruitment sites, a source of drone attacks and daily shelling of Armenia border regions from these occupied areas. Erdogan guarantees it.

Putin does not appear to understand that the Turkish neo-Ottoman fantasy is the reclamation of all Caucasus and Crimea, which they lost to Russia in successive defeats. Erdogan is using Arab blood for his nefarious insane goals. The Wahhabi cannon fodder is part of the Turkish evil strategy.

The Turks are known for their overblown confidence, its their weak point. Soon their imperialist ambitions will collapse under their own weight, especially if Erdoggy’s confidence is inflated even more by the russians… but still, the turkeys shouldn’t be allowed to cross the line.

its getting overran heavily. check out the videos. today a Regiment was mascaraed in Martuni

This reports initiated by media groups of SDF first. Then some other “journalists” claimed the same things. They repeated this over and over again, now it appeared on Times journal! Yet there was no single solid evidence on this claims. If I would see an solid evidence on this, I would believe the reports. If you repeat the lies over and over again they indeed beome the truth. Today’s media is controlled by bunch of people who is trying to shape world.

In my opinion both “jihadists in Azerbaijan” and “Kurdish fighters in Armenia” news are hoaxes and someone trying to escalate the conflict.

thats the thing. you won’t. it will come and go and you will have no idea. as usual

best of luck surviving October. remember, republicans like waging wars before elections, guess who they don’t like

Armenians have a large, well educated diaspora and millions in Iran, so there is no need to transport anyone, they are quite capable of whupping the corrupt Aliyev regime which is as crappy as the perverted house of Saud.

Erdogan had the history of sending Syrian mercenaries in Libya, no one can argue this. Now hundreds of Syrian fighters from different province were on their way to Nagorno -Karabakh frontline. Sad to note that the Nagorno-Karabakh will be their graveyard because of promised little amount of money.

ErDOGan runs for him self, all thoe it seams He must be coated with teflon, but He is doing the bidding for the masters, the UssA, and is to expand the choas into the caucasus regions. I have desdied to take the glows off. What do you know about the history of that region, and wht do we know about the Azeris, anything, at all, and why is it that the Na Ka wanted to create their own state/autonom than stay inside Azer, and remeber NK was by large an ethnic Armenian region incorperated into Azerbaijan and in Gorvatcjevs Sovjet started to woice their independence from Azerbaijan, and then this happened.

I am going to ling to some events from an site, to you, taken from somewhere I usualy dont go, unless its about birds, flowere etc, wikipedia but to just give you an head start you need to know and be aware, all thoe this crimes are well documented, they are never spoken about in the wester world, more or less due to not whom was slaughtered but whom was behind that slaughter this people is the sole reason for what Turdia is to day and why they, despite their harsh rethoric is nothing but an ISISraeli bitch. The key words are prognomes, remeber that. The Azerbaijanian pogromes and the attacks on Armenian people. The Sumigat pogrom: https://en.wikipedia.org/wiki/Sumgait_pogrom And along with an whole lot of slaughtering of Armenians between this two mayore Azeri slaughter feasts do you really think this Muslims are peacefull, raped, chopped and burned people alive, just like they did from 1914 to 23.https://en.wikipedia.org/wiki/Armenian_Genocide The next big one was the Baku pogrom:https://en.wikipedia.org/wiki/Baku_pogrom

I read already an lot of bullshit, but remeber Attaturd as an Donmeh Jew as erDOGan is, witch means coming from an part of the people whom also was behind the destruction of the remnants of the Ottoman empire, the enemy within, and now, shamelessly uses that period, the Ottoman to bolster His insane abitions, of course based upon flatout lies and genocides of others, more or less the neighbors. But I leave it there for now, but I also question the level of attacks on the Armenian Gov, since its the historical pedigree that rests on/in the people about the events just reasently that I know will be the one that makes, I hope the Armenian people stand together and fight the scums of this world.