Security Chief of Ahrar al-Sharqiyah, one of the biggest factions of the so-called Syrian National Army (SNA), was killed on March 28 by the Free Syrian Police in the Turkish-occupied city of al-Bab in northern Aleppo.

According to many opposition sources, personnel of the Free Syrian Police, a law enforcement body backed by Turkey, were patrolling al-Bab to close shops, cafes and restaurants as a part of a plan to face the coronavirus pandemic when they were confronted by the Ahrar al-Sharqiyah’s Security Chief Elyui al-Sayah.

Al-Sayah, known by his nom de guerre Abu Rasul, engaged in a firefight with the policemen, who killed him and injured some of his militants.

In response to the death of al-Sayah, Ahrar al-Sharqiyah launched a large-scale attack inside the city of al-Bab targeting checkpoints and centers of the Free Syrian Police. The group’s militants even attempted to storm a hospital, looking for injured policemen.

The Turkish-backed group released a statement in the name of the SNA, vowing to avenge Abu Rasul and another slain militant, Mohamad Zarur.

“We are the SNA promise to hold the killers responsible,” the statement reads. 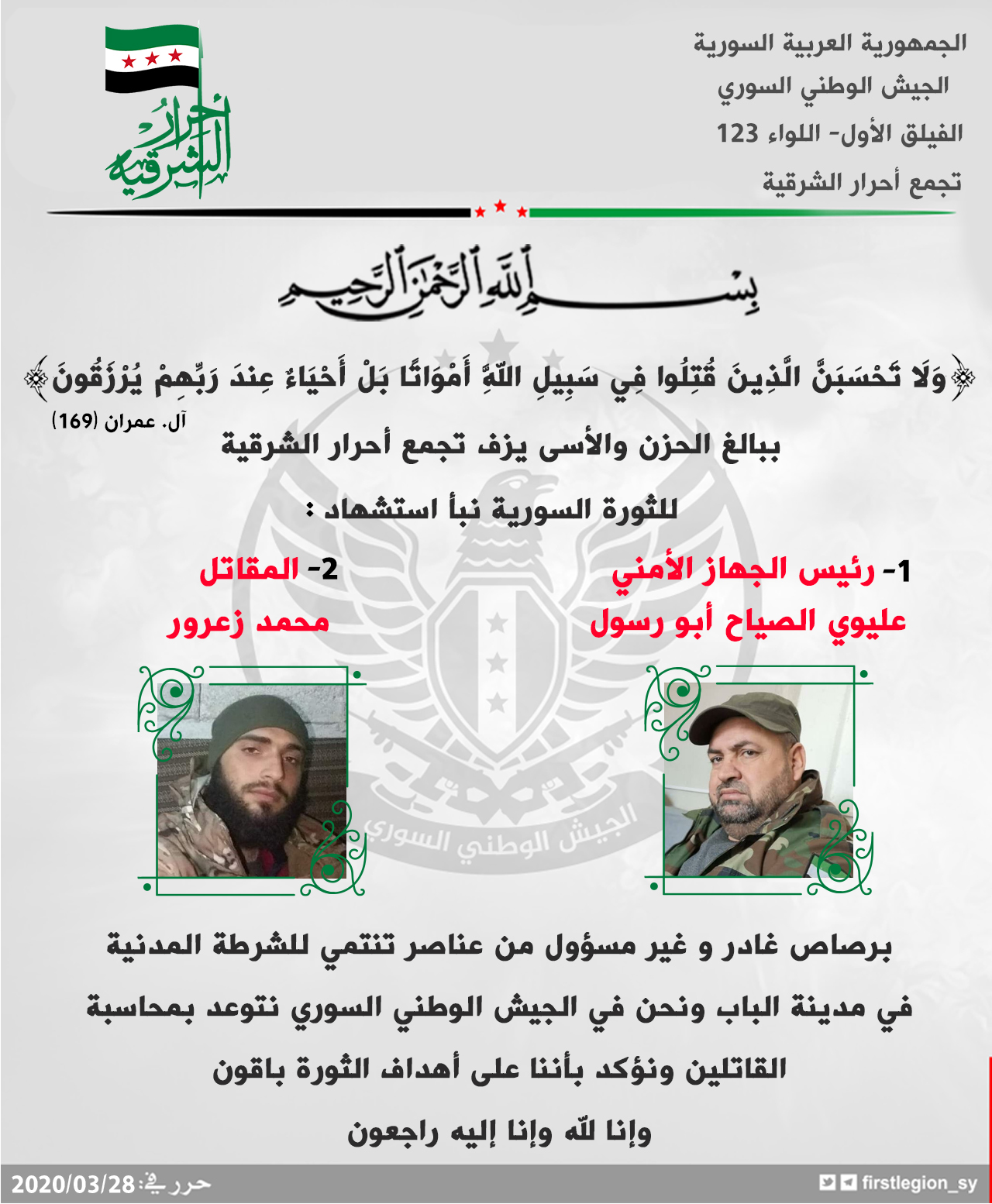 Abu Rasul photo on the right side, Mohamad Zarur on the left. Click to see full-size image.

The clashes ended in the afternoon, reportedly after an intervention from Turkey. According to the London-based Syrian Observatory for Human Rights (SOHR), ten militants were injured as a result of the clashes.

A day earlier, a family feud led to similar clashes among Turkish-backed militants in the occupied city of Afrin. At least one militant was killed.

These incidents reflect the state of lawlessness in Syrian areas occupied by Turkey. Ankara is not apparently interested in changing this situation, likely to avoid involvement in the internal conflicts of its proxies.

Citing SOHR is discrediting oneself.

SAA can’t capture Al-Bab. Turkey would never allow it. If the Butcher Regime did advance there, they would be hit by Turkish drones and artillery.

Turkey wouldn’t allow it,behave yourself clown,if the SAA get the green light those turds are history.

No wonder You kill each other.

This is the future of ISIS occupied Syria: gangs parading as police killing each other in cities.

Tribing like this or a warlords are very close to the animal. Not only lions are like that but also rodents.

How big is that incident. 1 killed is only a skirmish. Leaders never should be in front like him. They will be be killed and many does by that stupidity.

Looking at the video I can only see why danes are learning the Iraqi army use less ammunition as well as to hit targets much better. They are like Assads having too much fuel:)

Its not funny but joking about is might be the killings take so many years, because the soldiers seldom hit anything:(

Those as contrast to Assads are pest for cohlera and much more then any Corona in its best.

Noone read your stupid comments .

Putins ceasefire allowed Erdogan to lockdown in 8dlip against Syrian government forces not against coronavirus in Turkey.