Turkish-backed militants captured several battle tanks and armored vehicles in their successful attack on Saraqib city and its vicinity in southern Idlib.

Al-Qaeda-affiliated Hay’at Tahrir al-Sham (HTS), which led the ground assault on the city, shared on February 27 and 28 several photos showing some of the seized vehicles, which included: HTS and the National Front for Liberation (NFL) captured Saraqib early on February 27 with direct support from Turkey. The Turkish Armed Forces provided the militants with armament as well as fire support from the ground and even the air.

SAA troops in Saraqib were badly organized and apparently lacked the will to fight due to low morale. Field officers also made a series of poor decisions and failed to take advantage of the heavy fire support available for them.

Now, the SAA is reportedly preparing a large-scale attack to recapture Saraqib and secure its vicinity. The attack could begin within a few days, if not hours.

What lack of morale? Maybe tired but lack of morale, no! What SAA achieved in the last few weeks will be written in books and studied for generations. It has not finished and they definitely have the initiative.

A taste of own medicine (with way more precision). Pro-Assad forces getting annihilated by Turkish firepower in Greater #Idlib. Massive armor losses.

Shut up, all your celebrating is the blantant support of JABHAT AL NUSRAH!! A worldwide recognized terrorist organization.

All this to benefit Israel.

Some muslim you are.

Where was the SAA’s AA protection?

Overwhelmed, which can happen if the numbers are big enough.

NATO has the right stuff for warfare!

Shut it you moron, no one cares about your little tit-for-tat strikes when you’re still losing the war badly. Germany kept winning a few small engagements right up until 1945, but it didn’t make a difference. Although it did give delusional fools false-hope.

Dont delude yourself. SAA units range from highly disciplined to practically no discipline, excellent morale to abysmal. Forces tasked with holding areas are virtually all conscripted. They melt away from HTS assaults with regularity, often providing no resistance whatsoever.

It’ll wind up in textbooks but only to be mentioned in one sentence: The SAA moved rapidly into Idlib where HTS was incapable of stopping the advancing forces.

saa just captured 7 villages and lost 1 in alghab front south of jisr alshughur i think it’s a matter of time before they cut the m4 …meanwhile extremly disapointed in saraqib front as of now no real advance since yesterday even with 25 th division and tiger forces reinforcements …the turkish strikes hurt badly the saa and halted their advance …let’s just hope they can capture saraqib asap i think with saturated air support and artillery in the area no way the erdogangsters can hold it …securing the m4 and m5 is crucial before any rest or ceasefire the fast they do it the better as the saa needs a couple of weeks of rest and restoration.

Add to that…
“The Syrian Arab Army captures the villages of Mansoura, al-Ziyara, Khirbet al-Naqus, Tal Wasil, and Zaydun al-Jadida in Sahel al-Ghab in the northwestern countryside of Hama.”
https://syria.liveuamap.com/en/2020/28-february-the-syrian-arab-army-captures-the-villages-of

SAA should “booby trap” weapons left behind,just as welome surprise that’s all.
Maybe with some serpentine and party hats….
Joking aside they should destroy everything that can’t be carried back,but I guess there is usually no one left to do so…

Interesting that no dancing jihadi are in photos with the tanks……..

This is a report from 5 days ago…Didn’t we see this South Front! Memory lost or something?

I think that massive Turk attack happened several days ago and thats the reason they ran, then after the Russian response bombing the Turks the Turks released the several days old footage making it look like they had struck back when infact it was them to begin with.

Yes! I questioned that because some of the footage is recorded during the day yet they claim the attack happened last night

I would love to see you sitting in a battletank while everything around you gets blown up by enemy drones.I think they maybe think their chance of survival might increase if they on foot.Ever thought about that?

Yes I did, hence the panic part… 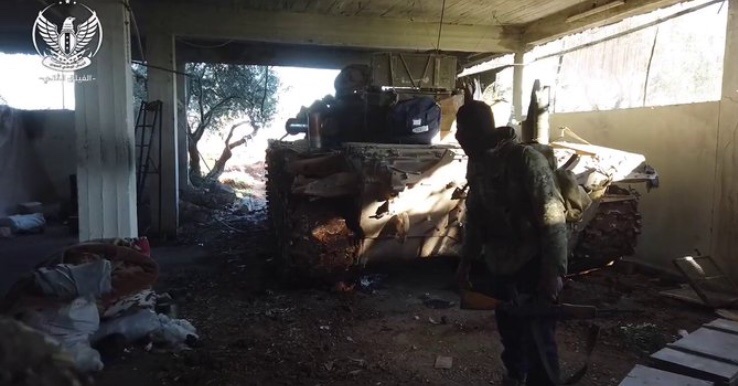 be hidden inside buildings? 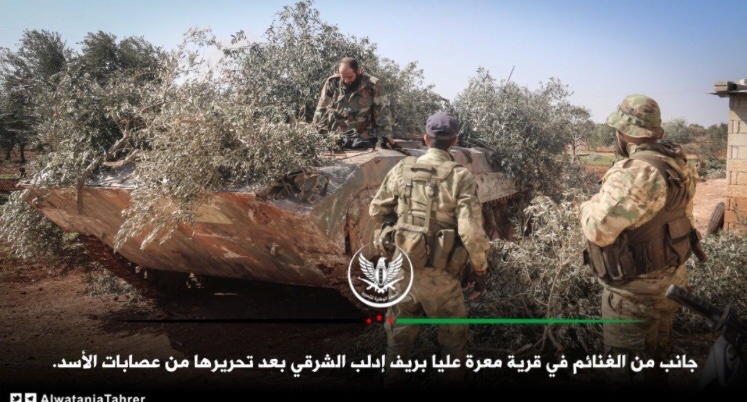 Mechanical breakdowns.
Running out of fuel.
Crew killed after exiting the tank due to the above.
Crew was instructed to abandon their AFV when it became obvious that those were easy targets from aerial attack. Tanks can be replaced overnight. Training a competent crew takes months.

now we do have some explanation turkey was fully implicated in the offensive the question is why russia diden’t go on the battle of sraqib i think because they get almost shoot by turkey and we have seen the reply of russia in the end of day don’t forget that “rebels” get full nato suport behind them… to win syria need full suport from Russia and Iran. Syria is a small country and already paid an heavy price don’t focus in bad situation it’s war sometimes you win sometimes you loose battle at the end of day the only thing that matter is to win the war

Those Turk attacks on SAA happened a few days ago and resulted in the SAA losing Sarqib, that was the source of the demoralisation and the reason they ran without their tanks, the Russians/SAAF bombing the Turks was a result of that ie the reverse of the Turkish story.

That explains it quite well…To be honest i don’t understand this war anymore. I thought i did. Right now another and even more armed Turkish drones flying over Saraqib and all ovr IDLIB….The SAA and Russians letting this happen to the normal soldier on the ground that’s certain death…WTF!!!? https://twitter.com/OrientNews/status/1233391609733054464

Exactly the reason why Hezbollah and the Iranians don’t fight in the idlib front…
Recently Iranian backed forces fought at the Western Aleppo front.
All because of bs agreements.
The blood of the soldiers weighs more precious that Putin’s BS agreement with crazy erdogan

Conscripted holding forces with virtually no fighting spirit, fleeing in terror as the terrorists approach, too panicked to even bother to toss a thermite grenade into their equipment, let alone drive it towards the next designated line of resistance.

I support the SAA as much as anyone here, but if you wanna have a complete understanding of this conflict, we need to be honest with ourselves.

On the bright side, SAA does have some excellent assault units and HTS is unlikely to hold these gains in the near future. The calculus just doesnt seem to favor HTS, at least until the Idlib pocket is reduced to the extremely rough terrain to to the west and/or Idlib city.

Let’s look at the bright side of things. The SAA and Russians probably garrisoned the area with units led by politically connected officers to show Damascus that the government had to purge their military of incompetent officers and generals, regardless of whom they’re related to.

We have seen the same escenario with Iraqi army and saudi army..it doesnt matter that have superior equipment and weapons….Arab conscript use to flee…later when elite forces&Hezbollah and RUAF push terrorist away…they return smiling and showing V with the fingers!…

the war ,again ,is at a very critical point. Same thing as when Russia joint the fight. it was a game changer. Assad was almost defeated now we were at the verge of saying ‘the war is over Assad won’. Turkey joint the fight hitting SAA very bad with precision munition imnflicting huge damage in open ground. gave heavy armour to isis with ‘state of the art’ electronics ,armour etc while SAA still fights with bmp-1s and T-0 tanks. if Russia sits idle idlib will be the end of SAA. they will face anihilation there and then the rest of Syria will be lost again.