Turkish-backed miltiants have been protesting in the area of Tell Abyad, northern Syria, because of a regular salary delays. If somebody still believes that Turkish-backed ‘moderate rebels’ are motivated by the ideology of democracy (or at least Neo-Ottomanism), there is an inside into the real situation on the ground.

Groups of Turkish-backed factions continue their strike in Tal Abyad city because of the delay in paying their salaries and lack of leave entitlements. pic.twitter.com/YP7hw5LM01

In 2019, similar protests erupted several times in the Turkish-occupied part of Aleppo province. However, the situation there was de-escalated because the deployment in Aleppo province allows Turkish proxies to participate in a variety of criminal activities (weapon, drug and oil smuggling). So, they have a constant source of income.

At the same time, Turkish-backed forces in Tell Abyad face apparent difficulties with such things because there is little to loot and smuggle in the area. The situation is so tense that the Turkish Army has been forced to intervene in order to prevent a further escalation.

Their payments is bullet in the head and leave is their death to be released from terrorism.

The Saudis and UAE started getting slow in delivering or outright skipping paychecks to their Sudanese Janjaweed mercs in Yemen, so the Sudanese quit. Remember that the Sudanese, themselves, were replacements for Blackwater/Triple Canopy mercs who quit because the pay wasn’t worth getting killed by the Houthis. Now the Saudis and UAE have resorted to replacing Sudanese with CENTCOM soldiers.

If the Turks can’t pay the head-choppers on time, you know they’re going to have to resort to CENTCOM’s Meatbags-for-Israel program (=U.S. troops). Smeagol isn’t going to like that one bit. You know how dangerous Americans are.

what sources do you have on Sudan in Yemen? The situation you described is old news. Sudan was leaving and then the saudus-UAE conspired a coup that overthrow Bashir and installed a new puppet dictator who promised to keep troops in Yemen. The new dictator is getting $3 billion , a hefty bribe but a small price to pay for controlling Sudan.

Its like You write. I have taken in strawberries form my garden several years after that.

Did they handle Your penis in a door?

Better in your dirty mouth .

Have patience turkisis rats, you ll get your money. Erdogay is having a teleconference with the leaders of Germany France and the UK , guaranteed blackmail money in the pocket.

Maybee. Erdo is in his own selfmade corner.

Erdogan wants the EU to pay for it

This reminds me a lot of the militia that supported Guaido. That’s what happens to you when you choose to be a $oro$ puppet. Stupid choice indeed for both these green “moderate” rats and these soyboy-supporting Venezuelan traitors:

What has kappend is, thatYou use anything else but Your own kind as excuse for everything.

If Soros really controled læike You say, You would be well educated, having a good job, a good income and a good life.

Naming people as traitors like that makes no sense. A netter one would be to propose improvements. The Sanches plundred, what was left and feeded the people with the old cow. It was meat. Now there is no cow and therefore not milk.

You are the puppet. Propose something. Not even the Chinese can get their money back.

I feel fine being a goy. So far I have not tryed anything else.

You don’ t decide anything and you speak just because .

If You have feet shorter then 3 centimeter it probatly will reach the ground.

Somebody put boxing glowed on Your hands??

Thats wrong. Everybody hired should be paid. You might think its a bad job and they should not have taken it, but thats different.

You get paid unless the company collapse. In Denmark we have state help for people not being paid by their collapsed company. People get at least some for compensation giving them time to find a new job.

Somebody hit Your penis again:)

Are you for real, these are head-chopping, child raping, sub-human scum ….and you want them to get paid for doing that !!

Are You for real. Do You really think people would have a job being paid nothing :)

It doesnt matter whereever You are.

They have a contract for being paid. So be it.

Its mine and Your oppinion those things above are crime and maybee not theirs.

In Your system women hardly dont work. But when they do, they are paid only flowers in their behinds when men at least get a used car.

Thats crime here. You are not even alowed to debate. Its a crime and haram. Thats a crime here too.

You are in the no human rights sector. Muchof that is crime here. You even prepare half of Your population for buy and sale. Thats slavetry to me. You kill much more men for honor even men are even more guilty in lamost all matters about that. Thats a crime according to opur constitution.

You here in Idlib as well as other places moee or less random bombarde civilians and even today blame jews and americans for it. But the jets are russian and Assads. That a ceime of the worst too.

So I will say, that You certainly has to be paid for those crimes just as those Jihadists.

You not even have a language for peace.

Is it because some US roaches leaving Iraq and the US soldier used to deliver money bags to Aleppo terrorists is now gone?

Could be.
Good observation…

RATS taking a pounding in the mountains …

May the Heroic Turkish Army and these ISIS Roaches jump at each others throats and get annihilated. At least they will serve as good fertilizer for the soil. Syria needs new crop fields with proper irrigation.

Notice how everyone here looks clean-cut and normal these guys seem…as opposed to the moderate activists…..

Yeah, the SAA look like regular dudes. The green rats either have fully-grown beards, long black hair, or are trying too damn hard to look “metrosexual”. I guess they want to look pretty for the Western MSM, so that they can portray them as the “young hippy millennials” fighting “illiberal dictators”.

I don’t mean to sound funny saying that, but I see the Ukrop Nazis try to do the same in terms of “metrosexual” appearance. If you look below, these guy’s hair are way too well-done for a war situation. These are green rat rebels in Idlib, and the guy behind the one giving the peace sign looks like a neckbeard or something. 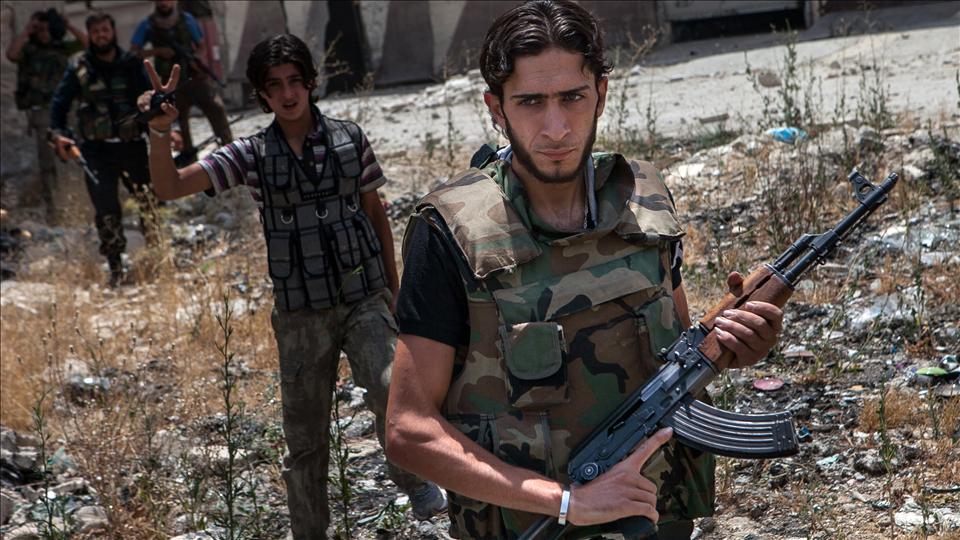 Shelling going on back and forth now …

Turkey’s money is supporting all evils – When Turkey can’t pay their terrorist gangster factions to continue to steal Syria real estate; you know that Turkey’s economy is collapsing.

Syrian Armed Forces, Russia & the other Syria allies must arrest all these terrorist gangsters or eliminate them completely.

STOP PLAYING AROUND AND GET THE JOB DONE ONCE AND FOR ALL !!!

You dont know if they have no money. You assume because war is expensive.

This is a Sunni group!!