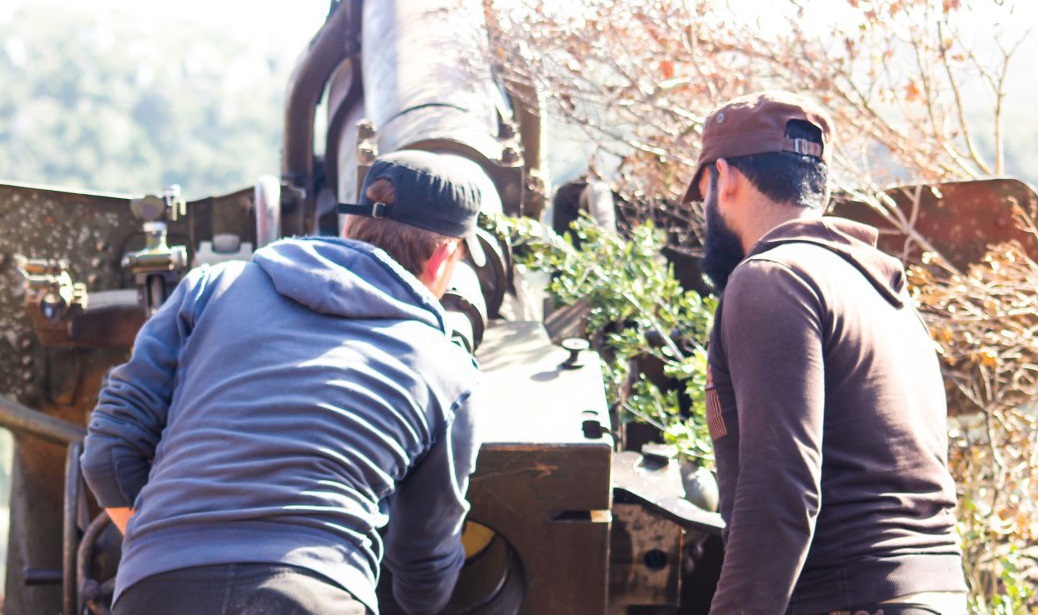 On October 12, fighters of the Turkish-backed National Front for Liberation (NFL) destroyed a bulldozer of the Syrian Arab Army (SAA) north of the city of Aleppo with an anti-tank guided missile (ATGM), according to the Syrian pro-opposition news agency Midad.

The attack is a clear violation of the Russian-Turkish deconfliction agreement as the militants’ positions near Aleppo are considered a part of the demilitarized zone around the governorate of Idlib. While the militants are allowed to deploy ATGMs within the zone, any military operation there are strictly forbidden.

This was not the first time the NFL violates the deconfliction agreement. A day earlier, the Turkish-backed group shelled civilian districts inside the city of Aleppo with mortars. The Turkish military announced earlier that all heavy weapons, including mortar canons, have been withdrawn from the demilitarized zone.

A source in the Tiger Forces told SouthFront that the Syrian Arab Army (SAA) and its allies are currently preparing to act against these dangerous violations before the end of October. However, the source declined to provide further information.

Earlier this year, several pro-government sources reported that the SAA was preparing to launch a military operation to secure a limited area north and west of Aleppo city. The aforementioned violations may force the army to launch such an operation soon.

great job, Means that liquidating Turkish assets can be made into a top priority too

sorry, am not fluent in whiny little bitch

Never trust the Turks,they are colluding with the Zionists to occupy Syrian territory.

Turkey looks after its own interests. These should be aligned with Russian interests as far as syria goes. or they will get spanked again

Turkey has its own interests kid. go f* yourself with your zionist rhetoric. :)

Lavrov said that the Idlib agreement is temporary. Keep this in mind.

Your lavrov is begging hard for offensive, we have 12 military bases in idlib, your lavrov can go bark lol

You are nothing but the bootlicks of the Americans. Erdogan will go and your crypto-Jew Donmeh kemalists or Grey wolves will get in. The Grey Wolves are nothing but Turk Deep State Gladio army. BOTH tools of the Yanks.

Noone with any brains will Trust a Turk ever.

Temporary could means 100 years. Have you notice that the same UN though about Israel in Golan Heights ?

Interests in Syrian oil,gas,land perhaps,?,you are no better than the zionist scum in Palestine,,but you wont last long in Syria,only a matter of time.

Hahahaha Turkey is the one who f*ed American backed terrorists in afrin, now. Turkey has its own interests, and Turkey dont give a f* about Russia or US so go f* yourself :D

Hey Turkey Bought Oil From the Israeli Secret Intelligence Service and Supported Filthy Nour al-Din al-Zenki Kiddie Headchopping Motherfuckers… Turkey became Wiser Fucking Hasbara…and realized they had to Go along with Russia…instead of this Filthy Terrorist Creating Western Empire that is Collapsing at the moment…so you tell me who is the Zio-Lover in here..? You are just a Hasbara….how’s the weather in Hell Aviv?

SPEAKER OF THE TRUTH
Reply to  leon mc pilibin

Time for the Zionist/Islamist terrorists to die!

It is the time of year to go Wolf Hunting. The Grey ones are the easiest to find as they are mostly old and fat and their putrid stench can be smelt 1000 metres away.

Hey Mohammed Bin Salman I bet you didn’t know your Consulate was under surveillance right?…I think you are going to be Chopped up soon….Turkey got you Taped while Torturing & Chopping up Kashoggi…you little Journalist-Chopper….you are in a bit of trouble… I bet this is part of a Bigger Plan to Bring you Down M.B.S…..hehehe…

Mohammed Bin Salman said that he would be happy to offer you a generous amount in exchange for your sympathy and awaits from you your Paypal address.

He invited me to come over to the Wahhabistani Consulate in Turkey to pick up my generous amount of Dollars…in cash..

You just made the prince cry

The Prince is in deep shit…. I bet they are going after the Jewish House of SAUD…so Either they get a Face-Lift Osama Bin Ladin style and leave for the Bahamas or they get Chopped up by their Own People…their Gold Will be Stolen by the U.K. & U.S.A.

Idlib is a Temporate Measure…..those Violations of the Putin-Erdogan Peace Agreement will be a good reason to go after Idlib Headchoppers again…Go SAA…

I think, Russia is the only country in the World that trust Turkey and makes deal with it.