Artillery of Turkish-backed forces hit positions of the Syrian Democratic Forces (SDF) near the town of Tel-Tamr in Syria’s Hassakah governorate.

According to the reports the areas of Dardarah, Tel-Shunan and Tel-Jumm’ah, north of Tel-Tamr were targeted. On October 18, artillery of Turkish-backed factions also targeted SDF positions in the Dirdara village near Tal Tamr.

Reinforcements of pro-Turkish fractions of the Syrian National Army (SNA) are gathering in the combat area.

Reuters has recently released a report, in which Turkish officials revealed that the Turkish military and intelligence are preparing to launch an operation against Kurdish forces in Tell Rifaat and other Syrian areas, including Tel Tamr, Ain Issa and Manbij.

On October 15, Turkish drones dropped leaflets over the Syrian town of Tell Rifaat in the northern countryside of Aleppo warning the locals of an upcoming military operation by the Turkish military and its proxies.

If the escalation grows further and reaches the other areas in northern Syria, a dangerous confrontation will be unavoidable. Any Turkish attack in Aleppo governorate will not be tolerated by Russian forces and the SAA, which is already deploying its heavy artillery and other reinforcements along the frontlines. 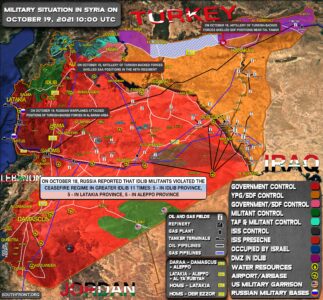 And Iran says nothing about this. Strange. It means that now Russia is alone.

On the contrary, Russia doesn’t do anything. Iran is in charge of Greater Aleppo. They won’t say much, but they’ll act. Problem right now is, they have no troops for ground attack. The SAA isn’t capable of such action, Russia is unwilling (of course), Iran doesn’t have the man-power. Only Hezbollah could do it, but they’re currently tied down in Lebanon.

Because Iran has good relations with Turkey.

Well the SDF better get the US to sort these Turkish factions out seeing as they are the lapdogs of the US. Can hardly tell the SAA thanks for the oil which the US is giving us and then expect the SAA to save their arses. Oh, this is in the area where the Yanks pulled out to allow the Turkish forces too attack the Kurds they were protecting but Russia/ SAA moved in and took over that role. Is this another case of the US using then leaving some group to defend themselves when it is time to run.. The wars have been quiet for sometime now so I guess this and Idlib about to blow ?? maybe it is killing time again with apologies to Ray Charles , Dean Martin , Willie Nelson and others.