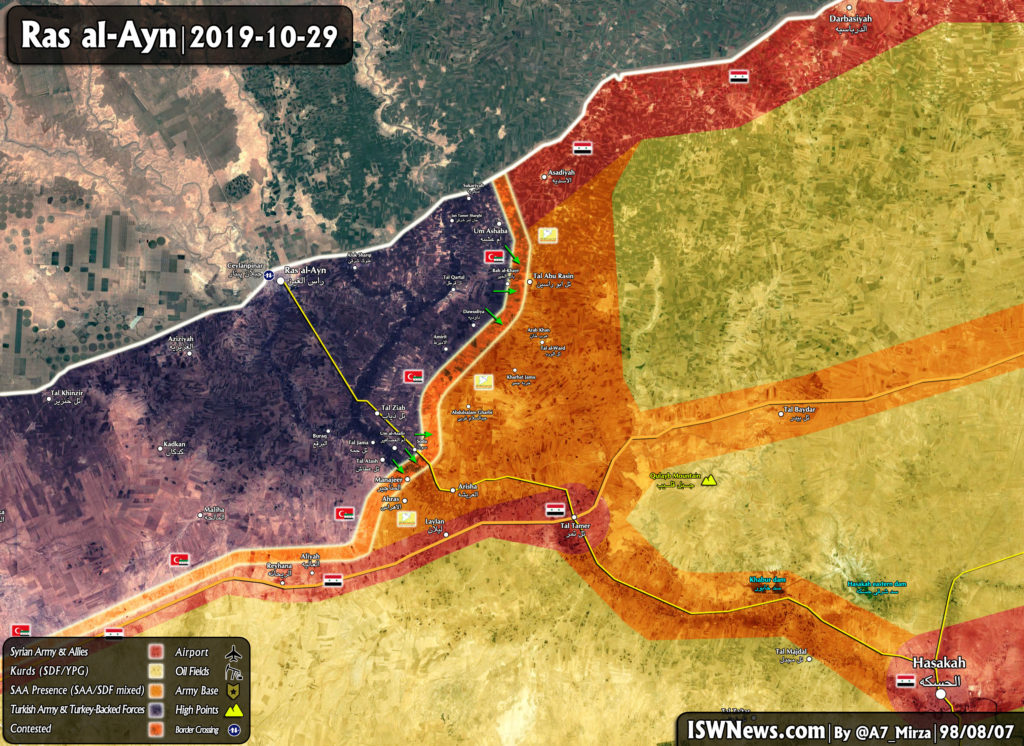 After a series of clashes near Ras al-Ayn, Turkish-backed froces made an attempt to expand their zone of control southeast of the town.

According to pro-government sources, positions of the Syrian Army were attacked near the villages of Tal Abu Rasin, Arab Khan, Soda and Manajeer. In general, Turkish-backed forces employed mortars and fire arms. However, some cases of artillery usage were reported.

The situation in the area remains tense.

Earlier on October 29, a unit of the Russian Military Police came under fire east of Ras al-Ayn.

seems the turkish-backed forces are hard to control and hard to dislodge. but give it a bit of time and they’ll be gone too, and soon.

Warlord led terror gangs has always been hard to control. Perhaps Erdogan is hoping that his terror gangs will be killed in Syria, as it would prevent decades of problems for Turkey.

Yep, that’s what’s going to happen but a tad later (when Kurds are back to order). There’s no other way around for Erdogan – if that “moderate opposition” enters Turkey than his reign will be shattered. On another hand – there will be lots of critics inside of Turkey but Erdogan will always have an excuse (article above). Rats would never let him down on this one :)

That would be my guess as well. The moderate head choppers usefulness is coming to an end and now they are a liability.

I agree, two birds/thugs (PKK & NSA/Jihadists all common criminal gangs) with one stone…….

Tempting assumption. I think it goes for Assads too.

In these situations, it is always good to know that the US has your back, keeping the oil supplies ‘safe’! :0

I have proposed Verner, his comments must be true for olive oil only. We will see.

Remember with the official Turkish forces you have the FSA and other scum terrorists.

Its olive oil Verner. They eat it.

You should try some Aleppo soap Jens. It will make you smell better, and the local Danish pigs will not gathering around you so much.

Erdo, their master, is checking the waters… Should TA engage with SAA or not?

And. what the saa can do with out Russian help

beat the turks; they can do that without Russian help

SAA HIT BACK AND KILL EVERY TURKISH BACKED TORKI PIECE OF DOGSHIT YOU SEE!!!!!!!!!!

I really hope to see some of them burned alive. They deserve it.

Time to show some force, SAA/hezbollah/Quods/Russians should obliterate those terrorists-proxies.

Turkish-backed rebels hold a position at the town of Azaz. Courtesy of Depot Photos.

Earlier on Tuesday, the Sky News Arabia TV channel informed of clashes between Syrian and Turkish units. On October 9, Turkey launched a military incursion into northern Syria, codenaming it Operation Peace Spring, with the Turkish Armed Forces and the Ankara-backed Free Syrian Army carrying it out. Erdogan’s military campaign kicked off with airstrikes on the positions of the previously US-backed Kurdish units. The Erdogan government claimed that its goal is to clear the border area of what it calls ‘terrorists’ (Turkey’s broad label of the Kurdish forces) and establish a 30 km-long buffer zone in Syria’s north, where over 3 million Syrian refugees in Turkey would resettle. Ankara’s incursion into Syria has triggered an outcry in the region and across the world. The Syrian SANA news agency branded the operation as an act of aggression, while the international community condemned Erdogan’s military operation. On October 22, Russian President Vladimir Putin and Turkish President Recep Tayyip Erdogan signed a memorandum on joint actions in northeastern Syria. According to the document, as of noon October 23, Russian military police and Syrian border guards have started to monitor the withdrawal of Kurdish military formations to the depth of 30 km from the border. ALSO READ Breaking: Roadside bomb targets Russian military convoy in Daraa

Russia and Turkey will then begin the joint patrolling of the area. On the outcomes of the agreement, Ankara stated that it had suspended its large-scale military operation in the area. However, Turkey retains control over the territories where it plans to relocate Syrian refugees in the future.

This comment must be a fake. There is nothing bad about USA, Westerns, Nato, Jews and Zionist – not even a single beep about Rotchild and Zoros as well.

As compensation I did expect that Iranians comes from Mongolia, but not even that.

I sometimes wonder why eggs from hens and human beings are not killed in the traditions of Halal.

Some people forget that Turkey support terrorists in Syria. So, these attack with heavy weapons are nothing to be surprised now neither later.

Well they’re testing the boundaries. Only response is to fight back harder

Its so funny. They have done that since Lausanne of 1923.

They only rest when they make children, so those can taker over, when they are killed themselves.

Right now they are so many there so many might think they try to create the opposite of United Nations.

One could understand if it was New Zealand, where everything is upside down:)

It might be sponsered by right wings here from the Foundation named “As long as they kill themselves there, they wont come here” and “New ways of late contraseption”.

The last one is in advanced economics too, because they eat a lot before they are send up and downstairs.

The most skinny thin and hairy ones from the Region, they export as pipecleaners for smaller powerplants. Many goes to Lebanon, where they instead of big powerplants has dieselgenerators for making electricity and holy smoke.

Soon the Lebanese wont need passports anymore. They are the only nation, where all smell like disels. You already can seperate them even more. Most men of Hesbollah only has one leg.

Before they started to fight again for real The Syria, which was not even up there, had 20 mio inhabitants. I counted them myself. Now its 19.550 inhb. and by that a gret succces.

And its international. Even Americans has lost a few.

So dont stop fighting against war. If You send me Your Hwife or even Your daugther, if they are more then 18, I will send You gun, ammo and a free ticket to join there.

Kindly regards “I am no Necrophile but crasy about women”