Militants of the Syrian National Army (SNA) are looting the Shergirat silos in northern Raqqa and smuggling the grains to Turkey, the Syrian Observatory for Human Rights (SOHR) reported on December 19.

According to the pro-opposition UK-based monitoring group, the Turkish Armed Forces are facilitating the shipping of the looted grains.

The SOHR’s report was not a surprise. Last month, Russian sources revealed that Turkish-backed militants are looting several silos and grains depots in northeast Syria under the eyes of the Turkish Armed Forces.

The Shergirat silos are located a few kilometers to the east of the key town of Ain Issa, where a Russian military base is located. Russia’s RusVesna.SU released aerial images revealing that the Turkish military had turned the silos into a military base, likely to observe the M4 highway which links al-Hasakah with Raqqa and Aleppo.

Seems kind of obvious, then. Syrian troops need to enter the first 30km of Turkish territory along the Syrian border, depopulate it and establish a head-chopper free safe zone.

It’s not an invasion of Turkey. It’s a protective measure since Turkey is unable to secure its borders.

Erdogan: “Attention NATO Super-friends Action Team: I invoke Article 5. You will send your sons and daughters to die for Turkey to protect our head-chopper sanctuary and profitable water- and oil-theft schemes!” 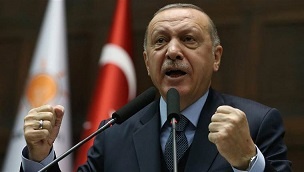 Those silos must have the game cheating code: “+unlimited grains”, Looting & looting but it never finishes! Consider it as an amusing fake news since communist Kurdish guerilla couldn’t take control of the M4 highway, aka peace corridor passing those silos. Turkey sends tons of food support for SNA & the local people living close to the borders, why would SNA loot a silo or a civilian or any other place?!?!

i thought that the SAA was present in the silos’ area.

I suspect that the Kurds removed most of the grains in anticipation of the Turkish invasion. That region had an unusually small harvest due to arsonists setting fire to the fields which left the Kurds with no grains to sell and just enough for local consumption plus seed to sow in the Spring.