As a result of an ISIS counter-attack, the Turkish Armed Forces and pro-Turkish militants have retreated from the recently seized village of Suflania east of al-Bab in the Syrian province of Aleppo. The attempt of Turkish forces to besiege the key ISIS-held town of al-Bab from the eastern direction has failed.

The idea to encircle al-Bab is now the key plan of Turkey-led forces that has to lead to retaking this strategic town and preventing Kurdish YPG forces from linking up the YPG-held areas in northern Syria. 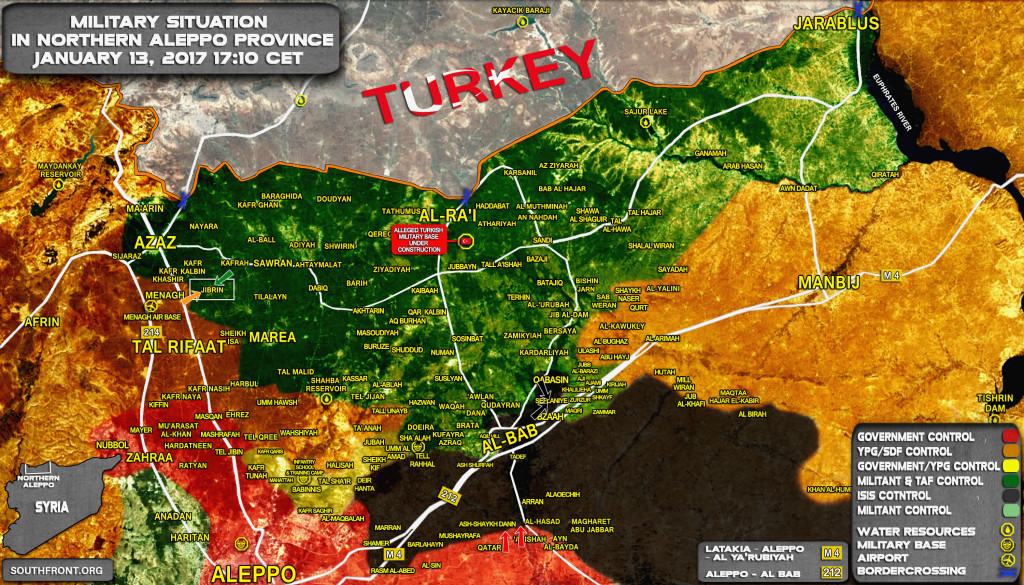 Turks are getting desparate.

With the wheather worsening, their existing logistical problems will worsen.

How long will it take for arabs and kurds of the SDF to start guerilla type fighting and infiltrating in turk occupied areas?

Already for two months Erdogan is saying Al Bab is about to be “liberated”.

OK, they will attack again. No big deal.

It is big deal.ES cant take Al Bab for more than 2 months.It shows they are weak pathetic force.

it will come “funny” times in turkey, when the rest of the desperade “moderate rebells” will recognize that they was just cannon fooder for erdKhan and his golden family.. if the jihadists then get control of him, turkey will blow up..

They have their best special forces there and they can’t beat those goatfuckers, so I agree they are pathetic.

I suggest you take over the command there.

I remember a guy on here about two weeks ago, saying it would be taken shortly. There is no will within the Turkish military, after the coup attempt, soilders lost hope, because their role is to protect the constituition and be secular……this is not secular, Turkey will implode one of these days. Them being in Syria has nothing to do with DAESH, it was always a Kurd issue.

turkey is sadly lost kemalists-vs-jihadists-vs-kurds the next years will be horrible..

I hate ISIS but you have to admit that they are good fighters. Have they ever lost a battle where they were outnumbered by less than 2 to 1 when on defense? The only places where they have been stopped cold was at Kobani and Deir Ezzor. At Kobani there was massive air support at Deir Ezzor air support and well placed artillery and a garrison that knew they had to fight to the death.

Not true, it has tried to attack SDF without it having air support many times, they regularly attack Kurds in al-Hasaka Governorate but never are able to make any gains. They also never dared to mount any real attack on the KRG in the northern Iraq because they are Kurdish backyards.

They aren’t actually good fighters. They exploit a lot of dirty tactics like using suicide bombs, car bombs, human shield, planting mines nearly everywhere, burning oilfields, using deadly chemicals and even when they die or are defeated they sometimes try to take as much of the enemy with them. Many also fight till death. And it brutally crushes those who oppose or betray it even a senior member, making sure there is so much fear that most will not think of sedition.

ISUS is barbaric, but their ability to strike with mobility and surprise must be understood. FSA has not learned this lesson yet, and how to deal with them. More airstrikes will get rid of their reserves. Let them have their wish of dying for the caliphate. Hope to see more ISUS bodies around Deir Ezzor!

ISIS are willing to do anything to win, even fight to death or harm innocents. Even if defeated it will flee to long distances and surpise at the least expected moment when the enemy is busy somewhere else like in Palmyra or Kirkuk. It also masters in exploiting sectarian tensions. That is how it how it was able to take so much land. FSA made a quick advance from August till November because of the surprise Euphrates offensive but let ISIS dig in at al-Bab and didn’t even develop any real strategy. It is stupid to face this group without a sound strategy agaibst its tactics, it will do anything to win.

Islam has to overcome these sectarian tensions, esp. between shi’a and sunna. Otherwise, it’ll be phased out.

That’s almost impossible until the dirtbag rulers or their underlings and civilians in Muslim-majority states keep cajoling and fraternizing and funding idiots who want their sect to be supreme. Unless all Muslims discard all the petty sectarianism and blaming each other for their problems, they cannot overcome sectarian tensions.

ISIS were formed out a splinter group from original Al Qeada in Iraq group that crossed border and started operating in Syria in 2011 in conjunction with Syrian Muslim Brotherhood militants – they were the core of original armed opposition – Washington certainly knew that from very start. Many of these fighters got training from GCC and NATO states in Jordan and Turkey way back at beginning of war, and have been able to transfer that knowledge in their own training camps. But their ranks also contain many foreign fighters, who go to Syria to die in jihad – this is serious problem – as these fighters don’t even have to be well trained or even competent to be a nightmare to deal with, as they will fight by suicide – drive VBIED’s, self detonate etc. The ISIS leadership are fusion of ex-Iraqi military officers and hardcore Syrian Sunni militants – so they have a hybrid fusion of formal military abilities combined with Sunni militant extremist attitudes – that is effective, but extremely nasty combination – no qualms about mining entire residential neighborhoods or any form of civilian/ infrastructure collateral damage.

The air support at Kobani was exaggerated in quantity and effect, and came late in the battle. I’ve done some combat modelling of Kobani and Manbij, and looking at forces involved and losses (and factoring for terrain, who was defending and so on), the SDF is between 2 and 4 times as efficient in ability to cause casualties as IS. (YPG/YPJ seems to be the most effective part of SDF.) IS only looks effective because most armies around here are of very low grade, and because they are a bit suicidal, which causes their opponents to act cautious (and hence slowly).

Based on historical data and available information on military cultures, the TSK should perform much better than the SAA. Their problems at Al-Bab are twofold: one, high level of demoralisation causes by Erdogan’s policies, which undermine the philosophical basis of the Turkish armed forces; two, they sent in a force heavy in armour, but light in infantry. With four mechanised infantry battalions in their two armoured brigades, plus a commando battalion, the Turks had a little over 2000 infantry when they began Euphrates Shield. That simply isn’t sufficient to provide adequate security for the armour and artillery, and do reconnaissance, and conduct the attack. They seem to have expected that the pathetic Sham Legion would, with it’s 10,000 fighters, be able to provide the needed infantry, but they have lived up to their name and proved utterly worthless, running away and leaving Turkish troops exposed. Hence all the tank losses.

When a government who is not supported by the majority of the people every govt department in that country will be weaken and that includes the military. And to expand its influence militarily way beyond her border will be a suicidal one. The defeat by Yemeni resistance fighters on Saudi forces and the defeat by the Kurds on Turkey forces in Syria are not surprise at all despite having better military weaponry. If the majority of the Syrian people do not want president Basher Assad, Syria would have long ago come under the terrorists controlled. It will be catastrophe for Syria and its people. The people of Syria are wise enough to stand firmly behind president Basher Assad govt and the brave Syrian army. Sadly, until today Turkey and Saudi still did not realize both countries cohort with two evil regimes, Zionist Israel and America. Both the Zionist Israeli regime and Zionist controlled America regime are no friend of the Arabs and Muslims. All they want is Arab land and OIL. Period.

Embarassing as hell. I thought they had 9k troops combined soldiers and islamists, plus lots of heavy armor. Im no general but how abt a 2 or 3 pronged attack from n/w or n/w/e, with all that manpower? Instead of always shifting from a singular direction. And i know there is supposedly turkish special forces, but they need to bring in the real turkish special forces/spetsnaz for the final assault as shock troops. With emphasis on special, like the saa have many numbered special forc brigades and regiments but then they got the real special forces like desert hawks, marines, commandos and cheetah/tiger forces. They can assault after they are softened up with some heavy ass jdams, and firtina howitzers and some of those turkish made grad style mlrs’s …. or are those just for show at parades, mr recep tayyip? And in real conflicts we use ww2 era tanks?