The Turkish-led attack on the town of Ain Issa, which started early on December 18, has come to an end. The Syrian National Army (SNA) failed to make any gains due to the fierce resistance of the Syrian Democratic Forces (SDF).

By December 19 morning, all clashes around Ain Issa, in the northern countryside of Raqqa, ended. Turkish forces have not shelled the town and its outskirts for the last few hours.

The attack claimed the lives of at least nine SNA militants. The SDF also sustained casualties, according to the Syrian Observatory for Human Rights. 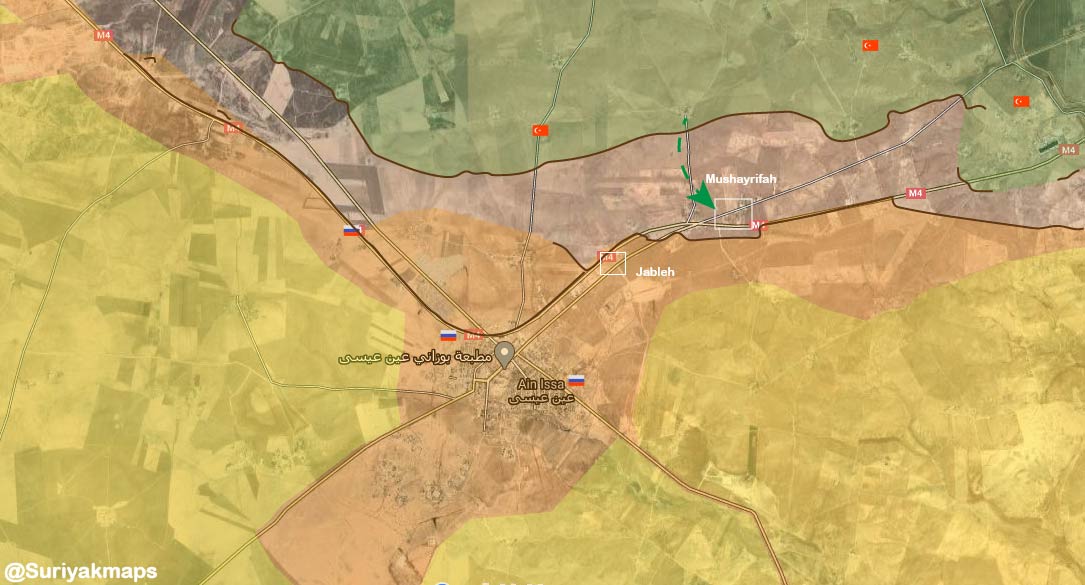 While Turkish forces failed to drive the SDF out of Ain Issa and its outskirts, their attack mounted real pressure on the Kurdish-led group.

Recent reports revealed that Russia is pressuring the SDF into handing over Ain Issa and other parts to northern Raqqa to Syrian government forces. The group was warned of a Turkish plan to occupy the region.

The SDF agreed to establish three joint observation posts with government forces around Ain Issa following Russia’s pressure. Nevertheless, it refused to hand the region over.

The last Turkish-led attack will likely push the SDF to comply with Russia’s demands, which are meant to protect Ain Issa and its residents. Turkish forces appear to be preparing to launch a second attack, not only in northern Raqqa but also in northern al-Hasakah.

Any new Turkish operation in northeastern Syria will threaten the already fragile humanitarian situation in the region.

Free Will is a condition of existence that has to be continually fough for, that’s because we come from the beginning in the image of Allah compromised by the need for Allah to develop in accordance with what is valid, so this has a remarkable reversible psychological aspect going foward has to mimic going back, anyhow the deepening of complexity is factored in by the deepening of understanding.

In order to help understand the development of complexity it’s important to note that everyone contributes to development in different ways, Trump for example contributed by opposing the Deep State who will lock him up when he loses his base, and Brother Erdogan contributes by dishing up some curry for maggot supporters of Israel in other words Kurds.

Free will doesn’t allow you to leave the Islamic faith for fear of reprisal, so so much for free will if you’re born a Muslim but want to leave the faith. Which effectively means free will and any spoken opposition to the prophet’s teaches is actually punishable by death according to the doctrines you believe, so I’m not so sure you really understand free will at all. Do you believe your fellow Muslims should be killed if they desert the Islamic faith and choose another religion or even choose none at all, and then criticize Islam for the things they believe Islam is getting wrong?

There is no such thing as “free will” in islam…actually, the word islam in arabic means submission…i am not an english native speaker but I don’t think that submission and “free will” are synonyms…

To submit, one must have free will. For without free will there is no need to submit to begin with and nothing to give in submission.

What happens to free will after submission, though ?? … that was the point

That’s ok for the the people who choose to join Islam but what about those born into the religion.

I didn’t say I was fighting for free will, I said it was fought for so development could take place, maybe I should have added that new understandings which are the result of free will don’t necessarily have to be a continuum of what is within the tolerance of complexities capacity to transition into, we could imagine, and did, a lot of stupid stuff, we backed it up with it up with humiliation and torture, against me Jesus Christ but none of that attempted evil synthesis can become existential reality if it did, which it has, hell will replace it, hell is probably climate change at the end of the techno industrial age, coming up , that’s where we are right now so free will is something of a luxury for now..

Ok fair enough, I misunderstood your point, but you didn’t answer the question I asked, so if you have the time could you respond and make it clear what your opinion is, do you think your fellow Muslims should be killed if they leave the faith and then criticize aspects of the religion.

I only have permission from Islam to use the name of Prophet Muhammad (pbuH) to put my circumstances to the test and maybe save myself from occultation, I don’t have permissions to speak on behalf of islam.prohably if I can survive I would opt for development to continue but probably this is a fight to the death.

I can only understand your comment to mean you do believe ex Muslims should be killed if the leave the faith and then criticize the religion.

I don’t advocate killing ex Muslims that would be passing judgment and I’m not judgmental, I simply abstain in order to be in a position of mediation.

This conundrum you bring to light is not only connected to Theology, for example Julian Assange is probably losing his entire life just because he went out on a limb to support Trump’s Campaign even though he doesn’t admit it, he was duped by the IMF World Bank and cohorts who wanted Trump’s Policies to be given a go so they put Assange on the top shelf, just in case Trump’s Policies worked, and they didn’t, that is according to the IMF and World Bank, so Assange became a liability.

Julian keeps asking the Jews for help but they say he should die as he’s no longer useful.

The same can be said of Jeffery Epstein and Ghislaine Maxwell, both people who deserted the cause which is equate to faith by Jews, so they were declared outlawed by the faith they represented and gotten rid of.

How about the Comrades purged from the Party when they become a liability, Stalin was cornered in exactly the same way when dealing with this conundrum, – Officials just doing their job were accused of malpractice by workers who had to do the unpleasant hard work that the Officials insisted on usually being done in a hurry, – so what did Stalin say in their defence, he just said, more or less “we know you will fulfill your duty one way or the another”.

This is common in Political development, take Comrade Ezhov (also spelt Yezhov) took it like a man, praising Stalin with his dying breath, as reported by members of the firing squad in the sloped cell he had built for easy washing of the bloody floor, that’s just when Politics is and sometimes Theology comes a close second.

Thankyou for your reply, that was a good answer. You’re right, everything comes second place when it comes to the pursuit of power, loyalty to country, religion, friends, family and morals, there is no honor or loyalty among those who pursue power. I’m glad you leave passing judgement to God the creator, the only God [Allah], only God has the all knowing wisdom to pass judgment on the sins we commit, we don’t have the ability, just the gift of conscience that God bestowed us. I would like to know more about the Epstein saga though, hopefully more details come to light soon, Prince Andrew, Bill Clinton and others may have to face more than just tough questions if some revealing light is shone on that sorry saga. Good day to you sir, or peace be upon you.

More likely it hardened their resolve to never trust Putin ever again.

sdf was using us troops as shields

The Kurds getting hammered by the Turks is good. It will convince them that their best chance at survival is within a multi-confessional Syrian state, and not as vassals of the US and israel.

I guess that the leadership of the SDF and SDC is complete corrupt and purely driven by personal greed. They are profiting as long as they can from the status quo. The failed establishment of a Kurdish state in Iraq, as well as the unilateral policy of the USA, could not lead to a new approach to the situation in the region. With the new American administration next year, you can be sure that the Americans will not leave Syria. Considering the mindset that drives his foreign policy team, they will step up in the effort to destroy Syria. The SDF/SDC Driven by clan and self-interest, for them it is irrelevant that they will not realize the goal of a Kurdish nation-state.