Turkish artillery units targeted and shelled positions of the People’s Protection Units (YPG) near the town of Tal Abyadh. 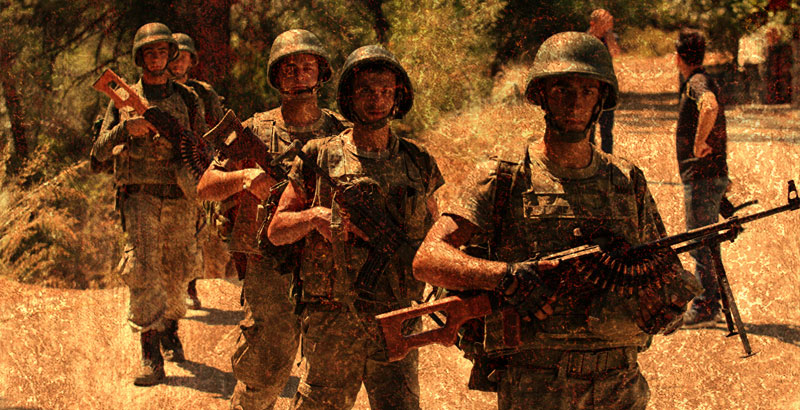 Positions of the People’s Protection Units (YPG) near Tal Abyadh, a key border town in northern Syria, were shelled by Turkish Army’s artillery units. As result, infrastructures of YPG sites were destroyed.

A headquarters of the Kurdish YPG forces near the Syrian border city of Tal Abyadh was targeted by Turkish artillery units. The Turkish Armed Forces also pounded YPG security checkpoints in Munbateh town in Tel Abyad suburb. As result, at least four YPG fighters were wounded.

According to military sources, earlier, more than 20 attacks were launched by the Turkish Army on Kurdish positions in northern Syria. YPG-held areas in Kobani, northern Raqqa and Aleppo were targets for most of the attacks.

Earlier this month, six US-backed Kurdish militants were killed, as well as several civilians were wounded during a heavy Turkish shelling across the border into Syria. According to Syrian Kurdish news websites, Kurdish-controlled Afrin area in the northwest part of the province of Aleppo was struck by the artillery fire.

The Kurds are by far the largest ethnic group (60+ million people) in the world that doesn’t have a country of their own! The U.S. had promised it to them to get them to rebel against Saddam – and then (as usual) screwed them by not supporting their rebellion. They are split between Iran, Iraq, Syria, and Turkey. The one thing that these often enemies have in common is the fear that the Kurds shall successfully create an independent state that shall seek to unite all Kurds into a single country. So, it’s not really surprising that the Turks would see the Kurds as a greater threat than even the disapproval of the U.S./NATO.

“60+ million”?? You’re pulling numbers out of your arse, it’s barely half of that. Maybe not even that.

The US, like Israel, Turkey and Saudi Arabia, don’t want the Shia Crescent, therefore they’ll want the Syrian and Iraqi Kurds to establish respective Kurdistans to disrupt this.

Except for the figure 60+ million (a number I sometimes heard at university from Kurdish nationalists), I must agree with Barbaross296. The Kurds are still the largest ethnic group without its own country in the world. As for the correct population figures, I refer to Dr. M. Koohzad, a professor emeritus of Middle Eastern Studies, “To correct the Kurdish population case and determine more reasonable, realistic statistics, a review of historical literature between 1921 and 2015 was carried out. A total of 70 sources were reviewed. The majority of them, 60 sources, contain numbers or percentages of the Kurdish population in Turkey, Iran, Iraq, and Syria. The rest of them, 10 sources, were associated with the former ones. For example, it was possible to find more than one place with information about the Kurdish population sizes in the same book. The findings of this literature during the last 94 years were presented in tables. The occupiers of Kurdistan hide the Kurds statistically. It is almost impossible to find any accurately documented figures on the worldwide populations of the Kurds. More accurate and unbiased estimates of the total Kurdish populations are not easy to find. The online sources are mostly underestimations, undocumented, rough, and wrong. The purpose of this research paper was to find a more reasonable and more accurate total for worldwide Kurdish population. By doing a lengthy review of 70 sources, it was found that this total has already reached 41 million in 2015. In order to have a sound policy towards the Kurds, and deal with their demand for independence, this figure, reflecting the new reality, must be applied.”

Arango, Tim. “Kurds Have Bigger Prize in Mind After Political Gains in Turkey.”

Caryl, Christian “The World’s Next Country: The Kurds are on the verge of getting a homeland of their own. If they do, the Middle East will never be the same.” Foreign Policy, January 21, 2015. http://foreignpolicy.com/2015/01/21/the-worlds- next-country-kurdistan-kurds- iraq/

Council on Foreign Relations. “Who are the Kurds?” All material © Copyright 2015.

Wikipedia. “Kurdish Population.” https://en.wikipedia.org/wiki/Kurdish_population#Kurdistan_2. This page was last modified on 17 June 2015, at 21:21.

What Kurdistan dude? Holy shit :O It lasted like what? 2 days?

This is Erdogan’s doing. He is a very bad president and commander in chief – stupidly waging war between Turks and Kurds who must unite to fight ISIS.

The Turkish military should instead be being commanded to take al-Bab. Skirmishing elsewhere helps no-one but ISIS. There must be a cease-fire between the Turkish army and the YPG. Erdogan cannot be allowed to call the shots! http://supremealliedcondista.newsvine.com/

Yes , this is a rather awkward , isn’t it , the FSA and the Kurdish , both American allies , are dangerously close to battling each other . With no less than seven new special forces bases being built by the US in Kurdish Syria , one would expect them to follow through on their promise to help them create “Kurdistan” . That would achieve the US objective of a fractured

I would just ask you to think of what the US objectives for Japan were in world war 2 and look how Japan turned out – incredibly well indeed, wanting for nothing, having the best of everything.

The US wants the best for the Middle East and its people tomorrow too.

So if the US is considering an independent Kurdistan or the options for partition of Syria and Iraq then that’s for the very best of reasons, for everyone.

I don’t think partitiion of Iran or Turkey is on the table now though. Turkey may want to look at more autonomy for Kurdish parts of Turkey though, same with Iran.

None of us know what is coming but we all have to apply ourselves to a solution that is going to work towards that peace and prosperty for the Middle East that Japan enjoys today, thanks to the enlightened leadership of the United States.

The Japanese are a highly dignified and honorable people , grounded in “present reality” because of their Buddhist history and mind set . You claim “The US wants the best for the Middle East and its peoples tomorrow too”. That is the problem, today is the reality . Tomorrow is the unknown. The American support of the Saudi Wahhabi royal family today , lends support to their proxy armies , ISIS , Al Qaeda , FSA , ” moderate rebels” and the war in Yemen. The end does not justify the means. This is not enlightened leadership by the United States . Using forces of darkness does not yield light. The partition of Syria , Iraq , Iran and Turkey looks like an ongoing war for another ten years Be it the creation of “Kurdistan”, or “Sunnistan” it appears “the very best of reasons” is not for “everyone” but for US “interests”. So possibly the US could reexamine its “divine right” to decide the fate of other nations . The world is hopeful of an American “enlightenment”. May peace fall upon you.

I would agree that Saudi Arabia and the terrorist groups they sponsor is part of today’s real problems.

Saudi Arabia is not a useful model for the the sort of moderate, secular Arab Sunnistan which I believe could be part of the solution.

Turkey’s Kemalism has more to offer as a model for a Sunnistan than Saudi Wahhabism I suggest.

Erdogan has stepped back from Turkey’s traditional Kemalism towards a more Islamist Saudi, Wahhibist policy, oppressing Kurds and crushing civil liberties of Turks too.

Therefore I look beyond Erdogan, to the wider Turkish polity, especially those like the People’s Democratic Party of Turkey – the HDP, with an enlightened approach to the Kurdish question, for solutions. https://en.wikipedia.org/wiki/Peoples%27_Democratic_Party_(Turkey)

A imposed solution that does not work for the Middle East will not serve US interests either. We are all served by a solution that gains popular support that builds nation states that the people will rally to, not resent as unwelcome, imposed overlord states.