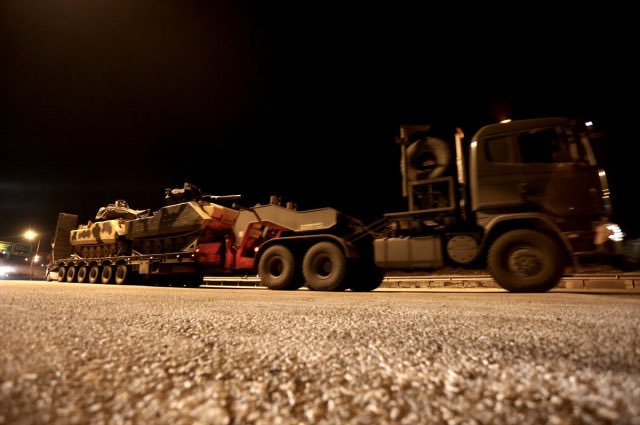 On January 14, the Turkish Army deployed more troops and military equipment including tanks, artillery pieces and armored vehicles around the city of Afrin in the Syrian province of Aleppo, according Mete Sohtaoğlu, a journalist of CNN Turkey.

Sohtaoğlu also revealed that Euphrates Shield (ES) forces and several Turkish-backed Free Syrian Army (FSA) groups are currently on alert and waiting for the order to launch an offensive against the Kurdish People’s Protection Units (YPG) in Afrin.

Earlier, Turkey’s President Recep Tayyip Erdogan warned that Turkish forces may soon carry out an attack on the city of Afrin in order to “clear” the southern border of Turkey.

Many Turkish observers believe that the Turkish Army will launch a military operation against the YPG in Afrin city in the upcoming days. However, Turkey had threatened the YPG in Afrin on many occasion over the last few months, but didn’t take any action.

…so Turkey cleans up YPG and SDF,…and when this is done the FSA will be abandoned by Turkey or re integrated in the SAA?!

Then to be called Ottomaniac Empire.

if will be again sultan

Don’t you know this is all a pack of lies?

Turkey is not shelling Afrin at all, they are sending peace and love messages.

The poor turks, with their small underequipped army, are cowered by the mighty YPG forces in Afrin, a region from where vile terrorists have been attacking, bombing, shelling poor turks in waves of invaders, supported by an overequipped kurdish army soon to number in their millions.

In such a case, one of course has to defend oneself and all of Turkey is prepared to fight to the last kurd in Afrin.

I am wondering which side Russia and Syria will support in a war between kurds and turks. Btw i am against this kind of war, but the kurds went too far invading arab majority cities. By invading these areas illegitimately; somebody (Turkey or Syria) soon or later will attack them. Anyway, i smell a rat in this afrin issue. Afrin is totally surrounded by Turkish Army and there is small passage to Syrian Army held area. So, again how this area survives and replenishes its resources? So, either Turkey is not sincere about the blockade or Syria / Russia is sending military supplies to afrin under cover. I think second option is more probable. Or else USA is capable of delivering supplies from air to that area?

as
Reply to  Cem Duru

There’s a military base hosting US unit in afrin. And another just close before the city. The US have delivering their supply directly by air in most cases in northern occupied region to deter any IS attempt at raiding the ground delivery convoys as well to conceal what and who they are moving around. What we can see is there’s seem nothing US can do directly to help the Kurds against Turkish forces. If it’s Syrian backed force they would most definitely attack them with airstrikes. This is just another linchpin against US plans in Syria. The problem is there’s no mercenary force clean enough for their propaganda machinations.

“There’s a military base hosting US unit in Afrin”

Please provide a source for this claim

“There’s a military base hosting US unit in Afrin” Read it again.

Not every SDF base hosts US units and there are no US units in Afrin (none, zero, nada!)

Fine you win. They’re not units they’re advisor and diplomats.

There’s no US advisors, no trainers, no diplomats, no US military personnel of any description in Afrin canton. You cannot show one single shred of evidence to back these claims you are making.

Apparently yeah you’re right. They’re just pulled back it seems. Listening post at Turkish side must have picked up something. What about the SDF? Can they just pull back if it gets dangerous? I don’t know.

“They’re just pulled back it seems.”…. what utter bullshit you spout!!!

Show me some evidence they were ever there in the first place…..

The one posted in Syria right now are very dissatisfied regarding how they have to be stationed with no clear mission or target. Something about pardonig Daesh/ISIL as well their defensive nature of their deployment.

Read my lips – give me evidence that any US troops have ever been stationed in Afrin. Don’t give me bullshit about some forum and “one posted in Syria right now are very dissatisfied”. Show me one US serviceman who says he is in Afrin.

You are just another Field Marshall Terra Cotta Woolpuller making stories up to suit your narrative.

Sure i said you would know better :)

You can call me Al
Reply to  Cem Duru

“Syria / Russia is sending military supplies to afrin under cover.” …to the Kurds ?

Russia/Iran probably helping with intel or possibly munitions but most likely by just staying out of the way.

The harder time the YPG gives Turkey the more closely aligned Turkey will become with Russia/Iran block. The harder time Turkey gives the YPG, the better for Syrian Govt forces. Let them kill each other.

I do not think Turkey and Syria will be able to directly cooperate for many years, but through an intermediary.

Assad will protest any action that Turkey takes against Afrin , they are still Syrians so far there. The of military supplies by Syria/Russia are unlikely, so you are looking at it being smuggled by an NGO in the area. The SAA found boxes marked with ICRC all filled with money and rooms full of it in Terrorist positions. So smuggling by NGO’s are not out of the question.

How do you see this playing out? How will Syria ever be able to expel Turkish units that are already inside Syria, when the “de-escalation zone” agreement with Russia lends them any legitimacy?

The Turkish equation in the Deescalation zone relies on 3 other parties to legitimize and extend the zones, they are only for 6 months and Russia ends in the middle of February. Turkeys ends soon also there and chance of renewal depends on the 4 participants Syria, Russia, Iran and Turkey thinking that Turkey can renew it on their own won’t happen. They seem to have failed to live up to their part of the agreement as they have a short time to disarm the Terrorist factions and have them work om reconciliation. Well we can see that isn’t going to happen anytime soon, possibly having them give up the zone to Russia or Iran maybe even China at the next meeting.

America, Israel, Turkey and Saudi Arabia all are united and are aggressive forces in the whole world they have entered into Yemen, Palestine, Syria, Iraq etc and have abused the international law by aggression against sovereign states and their integrity.

The new state of Jew called greater Israel is forming which will consists of Saudi Arabia, Iraq, Syria, Turkey, Lebanon, Jordan and Egypt but then the Jewish greater Israel will become a greater graveyard of Israel in which each and every single Jew will be buried.

Why because a huge war called armageddon of Arab and Israel will start in which whole Jewish state greater Israel will be destroyed and will be finished forever but all Arab states too. From this war only few Arab families will survive and the remaining all Arab states will be destroyed including Turkey and Egypt. This is called armageddon: the final, decisive battle between the forces of good and evil,

Why the Arab states will be destroyed because these Arab States are not nuclear states. The Armageddon or final decisive war will be nuclear and not conventional for which Israel is ready since 1980 but the Arab states are still not ready even in 2018 and they need 50 years more but with in 50 years a new kind of 1000 times more destructive weapon will develop called antimatter weapons. After that nobody will think about nuclear or hydrogen weapons.

Florian We
Reply to  Rob

If is is good against evil, who shall be the good side ? Arabs ? Hahaha. Jews ? Hahahaha. C’mon.

Rob
Reply to  Florian We

You can call me Al
Reply to  Florian We

we’ve heard this millions of times before….each time the convoi is about 3-4 tanks, and 1-2 trucks…the journalists covering the fiesta are more than the troops…..its a propaganda issue nothing more…The sultan barks but he cant bite….he enjoys US ‘amnesty’ because he is mental and thus they let him bark (threatens everyone on tv, even Trump etc). he doesnt mean business…he is in good terms with hts and fsa (mainly hts because fsa is a bunch of cowards) so they tolarate turkish presence there. the amount of troops and vehicles there are very little for serious operations. Just a show of ‘mighty Turkeys force’…..even the sand is laughing with erdi….

Syria should let the Turks deal with the Kurds and with the US supported rebels in the north, until the rest of the country is freed from rebels. After that one can deal with Turkey and any remnants of US supported terrorists.

Turkey only abuse international law. Turkey should first have to take permission from Syrian government then he should have to operate inside Syria.