On March 16, the Turkish Army and its proxies from the Free Syrian Army (FSA) captured the villages of Khazban Fawqani, Khazban Tahtani, Jalqam, Shaykh Bilal, Jarkhatli, Qassem, Kuliye Fawqani, Kuliey Tahtani, Dar Kir, Ayn Hajar and the town Juwayq northwest of the city of Afrin, according to sources linked to the FSA. The Turkish Army also captured hills “800” and “1500”.

The Kurdish Hawar News Agency (ANHA) reported that the Turkish Air Force (TAF) had continued conducting airstrikes on the city of Afrin. During the last 24 hours, 8 civilians were killed and 30 others were injured in the TAF bombardment according to the ANHA.

As the YPG continues to retreat, more than 30,000 civilians have fled to the government-held areas in Aleppo governorate over the last few days, according to Syrian pro-government sources. This number will likely grow in the upcoming days due to an intense bombardment by the TAF.

The current main target of the Turkish Army and its proxies is likely the center of the Ma’betla district, northwest of Afrin city. Turkish forces are currently stationed only 15km west of the district’s center. 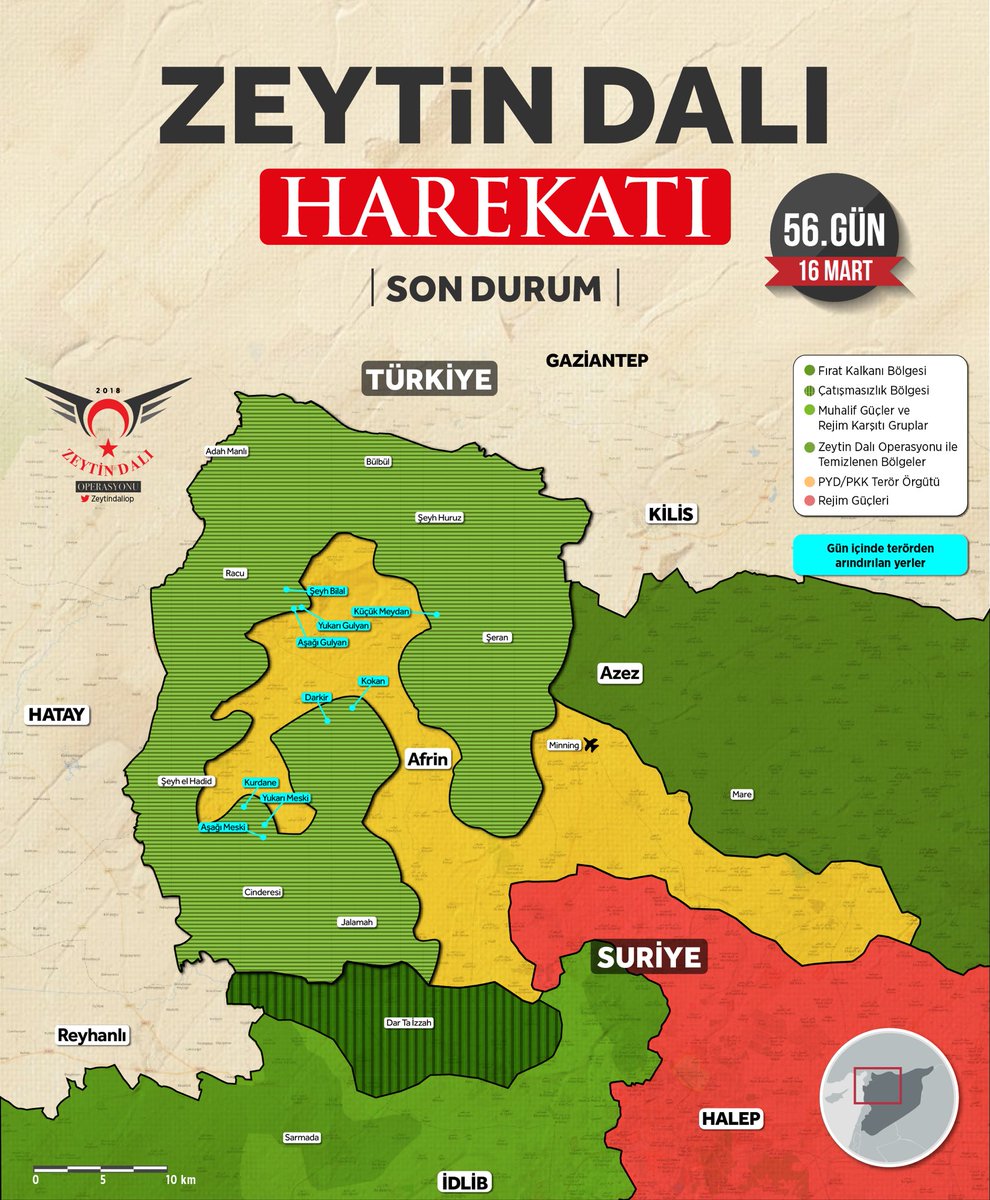 This map is also outdated, Afrin is sieged from the north (3 directions) so that means its cut in 2 pockets.

Civilians of Afrin are now fleeing towards the “dictator” Assad. XD.

Syrians should not take them unless they want to let enter a trojan horse like they did before by welcoming kurds into Syria.

bagels are getting stale and kipper-poo.

Erdogan: the pro Trump terrorists SDF, YPG have already lost 3000+ fighters and will see further casualties if they don’t handover Syrian and Iraqi land to their nations. Erdogan have begun operation to remove pro Trump terrorists from Syria and Iraq. Erdogan should continue operation but in unity with Syria and Iraq to minimize casualties. They should safe their nations.

What are kurds are doing is suicidical.

Also ruskie monkies and assad. If tzrks take all yellow are, aleppo will be in worse situation then ever.

There is acoord between turkey and Russia. Torks are killing Kurds and Kurds can not stop Turk offensive. Son they has to go to out of Afrim to serch protection where are the Americans.

Sure. Ruskie monkies betrayed syria. this is the accordanse bitween thwm and turkey. gas pipe… ru$$ia :)))

Hey, Ottoman fanboys! How come the civilians are fleeing to Syria? Why don’t they flee to Ottoman occupied areas?

Because corridor directs them to Syria, just look at the map, dumbass.

Nuke on Ankara, Novichok on Istanbul!

Not to mention Ottoman bullets raining down on refugee columns. Right OrcBoy?

This is circulating around twiter – “President Erdoğan holds phone conversations with NATO Chief Stoltenberg and Ukrainian President Poroshenko ” …….I know no more as I don’t use twitter.

Here it is. The mad Sultan is getting awfully feisty. https://syria.liveuamap.com/en/2018/16-march-president-erdoan-holds-phone-conversations-with

After your comment, I went back and on the comment they post a link to the source…..with all the comments underneath. This Syria.liveamap as I first posted is some Yank or BS account, but the source accounts seem pretty good.

Pity I don’t do twitter though and unable to respond.

I don’t do twitter or facebook. There is only so much Globalist Propaganda that I can tolerate.

they are already accommodating 3.5 M. they told me that they’d be sending the new comers to your neighborhood? Is that ok, Mr. Conscientious?

did you had anything to eat today little orc?

What about Usa, White elf man ? We all know where is Sauron territory xD

You have looked into the Eye of Sauron once too often, Saruman!

Meaningless claptrap ad hominems. I know you Ottomans love slinging insults instead of debating facts but I find it boring.

We all know you are usa Lover, and we all know Saruman”Erdoğan” work for sauron I mean usa.
So why you are here and blaming orcs if you are one of them ?

You are racist, and hypocrite white elf man.

Lies! No one speaks out against US policies more than I. I love USA, not the corrupt Globalist Occupation Government. At least you are correct about Erdogan being Saruman. Mussolini could be another good analogy.

Then sometimes, you must talk about your shit too… İn the end our shit was, hand pupet for your shit.

What s bad about ottoman?
Back then when muslims were united, no nationalism and no blood in the muslim world.
Since then the killing wont stop

Right, Ottomans and Timur were great friends. Ottomans and Safavids were like brothers! Arabs loved Ottomans so much they joined with British to fight them! Hahaha. Tell me some more jokes, please!