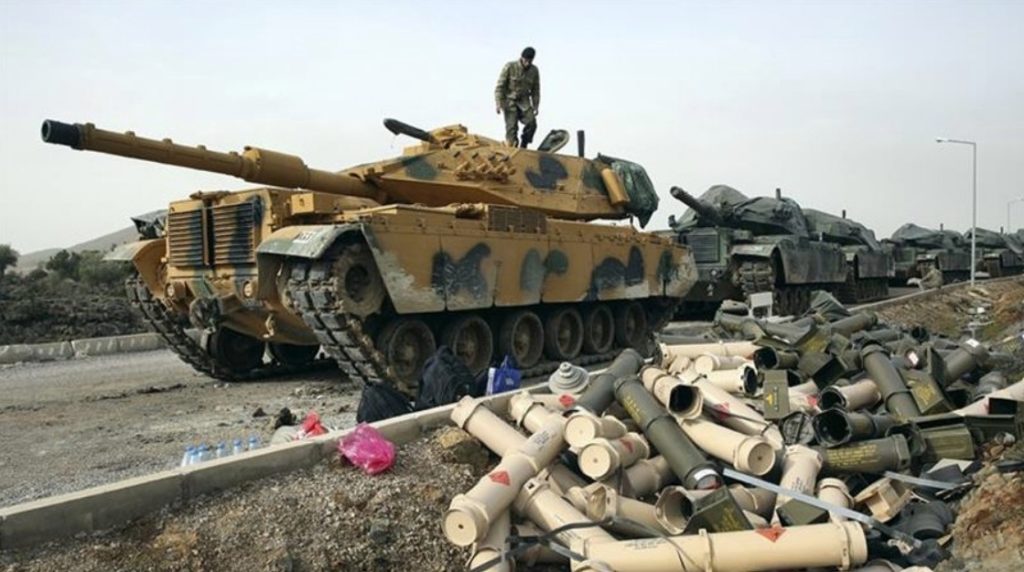 On January 23, the Turkish Armed Forces (TAF) and the Turkish-backed Free Syrian Army (FSA) restored control over Birsaya Mount east of Afrin after a series of clashes with Kurdish YPG/YPJ forces. Initially, the TAF and the FSA captured the strategic mount on January 22 but then they were forced to retreat from it under the YPG/YPJ pressure.

The mount is one of the key positions east of Afrin. If the TAF and the FSA are able to secure it, Turkish forces will likely advance on Sharanli and then make an attempt to link with its positions in Ash Shaykh Khurus where they had achieved notable progress.

#Turkish Armed Forces and #FSA are again at Mount Birsaya as #Turkish TV is live broadcoasting. As I told, this tactic was to avoid an ambush by #YPG like #ISIS had ambushed in Sheikh Aqil near Al-Bab with tunnels & the advantage of the night

So they’re right on the track when they make brief retreat to avoid planned ambush and counterattack. Did they have a mole on the SDF sides?

Remember the FSA were part of the SDF after they defected and then defected back and like all the traitors switched sides for the best deal !! – (I think that is right).

This is why the SDF is pathetic, they had years to fortify their positions and received advanced weapons but when push comes to show they utterly collapse.

You cant lose key positions 4 days into an invasion, morons….

Right. That’s why they took it back, repelled the second attack just now and can use the mountain for a counterattack towards Azaz.

they lost it :P

Those are not available, if ever, within one or two hours to the general public. So you cannot have them on what happened just an hour ago.

Not believing both bias sauces would be the pragmatic way to go, if it is truly a strategic site then militarily it will be contested for days even weeks! Any study of history and modern conflicts would validate this conclusion.

Agreed. SDF has posted youtube with recent interview on top of the mountain.

You are most likely correct they will try again, and again and again.

Was thinking these positions have been free of fighting for a longtime, I would presume that they would of been well fortified with trenches and bunkers given there importance! If not then it will be a blunder to go down in history..

So sad? . Anyway if Turkey cannot even take a hill , they might as well go home.

In long term it will likely make little difference, as the TFSA are a politically and militarily expendable resource for Turkey, using proxies keeps the official Turkish military body count way down, and at end of day, if Turkish proxies are struggling at the infantry level, Turkey will resort to air force strikes and long range artillery bombardments.

I can see the logic there.

However, if and when TFSA drops out of the game because of their heavy lossess (some 10 to 20 times more than turkish lossess), than TSK will be unable to take the ground. Bombings, shellings, can inflict lossess but cannot gain you the ground, which was the only reason for US to support SDF in the first place.

Turkey can’t hold their positions and casualties are over 100 and rising for the Turkish proxies fighting so far 4 dead Turkish officers plus one soldier (advisers with the proxies is my guess). Turkey gains the hill FSA loses it and yet no real commitment of Turkish troops only advisers so Turkish propaganda morons…

Maybe they are afraid to take heavy losses and while in the meantime Russia deploys more S-400s to the region. Looks like 130 trucks for the SAA and more equipment arms and supplies coming in seems FSA/HTS gooses are cooked and why they are running to Afrin , but they can’t even take it and hold it.

SDF and YPG just reported the second try by FSA failed. YPG in control of the mountain.

I remember not that long ago, according to Dutchie, FSA were “freedom fighters” against butcher Assad…

First there is a difference btween FSA and TFSA and I have repeatedly stated I do not support neither of them as I am against any militant Islamism. That Assad is a butcher, I agree and am hardly the only saying this, maybe with the exception of most ass-adophyle commenters here.

kurds are mass murderer. they must leave syria.

You just have no friends any more huh?

He never had any, not in real life, nor here… he just supports anyone who is currently “a good guy” by CNN/StateDepartment standards: FSA yesterday, SDF today, ??? tomorrow.

I wasn’t saying that Assad is a butcher, I meant that it is you who’s repeating zio lies here :) Regarding FSA/TFSA – I don’t remember there was much difference for you when they were fighting SAA.

TFSA have, as far as I know (TFSA is turkish led forces in Azaz colony) never fought SAA, except for a few skirmishes south of Al Bab. FSA forces outside the colony are, to a little extent, less islamist.

Distinctions are furthermore unclear as there are many links and fighters tend to wander from one group to another.

All in all, better to have them all cleared.

As for the Harasta base, I had and have respect for the bravery of rebel forces there. That is not saying something about their aims and policies, with which I disagree strongly

@dutch-nato-anaI All of them are nothing but criminals and terrorists owned by the real butchers from Washington DC – the real global terrorists and tyrants that you and similar nato c*cksukers worship and obey.

TFSA and FSA are the same in Idlib no difference, why do you call Assad a butcher based on Ken Roth who said that Saddam had wmds seems there are no credible sources. Based on talk about Cemeteries expanding , good god every damn nation would be considered for being butchers. That just happens when you have grave space being bought up, need to prep the area for burial use or do you think that magically happens.

Whom Assad butchered? Any proof other than from Cnn, Fox news

You guys are just pure zombies know next to nothing

I was trying to outline Dutchie’s change of friends :) Assad is a legitimate president of Syria who managed to save his country from anglo – zio invasion. Sorry if my sarcasm towards Dutchie and his false accusations wasn’t obvious to you.

AFRIN- The heroic resistance of People’s and Women’s Protection Units (YPG, YPJ) and Afrin people led to clashes between the mercenary groups who participate the Turkish occupation army in their attacks on Afrin.

As reported by AFN, pic included – could not copy.

Reporters without borders reports that turkish censureship now “demands patriotic coverage of military offensive”, which in effect means they are now a propaganda medium.

This is simply going to be a contested area for a long time, days or weeks even! Until there is verifiable satellite images spanning weeks we will never get a full understanding of the situation! However as I stated in a previous video I see this as a opportunity for the SAA in idlib and south Allepo, drawing resources away from FSA units attempting to aid al-nusra IMO this is a good thing!

Why doesnt turkey just drop the pretense declare itself the caliphate crown erdogan the sultan and simply announce it is annexing syrian territory?

This fsa front and fighting terrorism excuses are lame and pathetic.