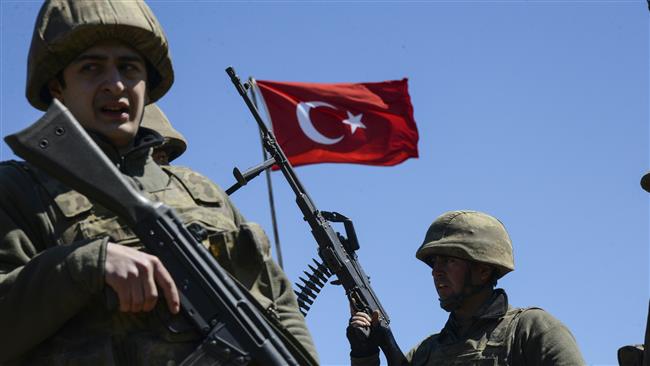 AlMasdarNews reports: The Turkish Army intervened in the Latakia Governorate on Wednesday when the Syrian Arab Army (SAA) launched a surprise offensive against the jihadist rebels of Jabhat Fateh Al-Sham (formerly Al-Nusra Front).

According to a military source in the Latakia Governorate, the Turkish Army fired several artillery shells towards the town of Nawara, where the Syrian Arab Army and National Defense Forces (NDF) were positioned on Wednesday.

While no casualties were reported, the heavy shelling forced the Syrian Arab Army and their allies to withdraw their assault in northern Latakia.

This latest attack by the Turkish Army comes just hours after their air force bombed the Kurdish-led “Syrian Democratic Forces” (SDF) in the northern Aleppo countryside.

So Russian government has decided to set Turkey loose on Syrian territory in exchange for the pipeline or what? Now Turkey has opened a new front in Northern Latakia which will take pressure of the Aleppo siege. So what was the point of a more than a month long pause in Aleppo liberation? Russia appears to be a dodgy ally. Doesn’t it? I understand that they have no right to attack Turkish army on their territory but on the Syrian territory they have every right to do so according to the international law. It seems like Erdogan’s carrots have been appetizing to Russia.

Dont blame Russia for this chaos in Syria, when Russia came late 2015 there was already the full mess made by many states around Syria and the US and some NATO states with arming and training wicked terrorists. The hole world is blaming Russia for dealing with the the rubbish which was caused by others. It is the US and NATO who are in charge to stop this bloodtirsty state of Turkey! Its their “Ally”.

Turkey is not Syria’s ally neither is US or NATO.Syria has no expectations pined on neither of them. By the way who allowed Turkish air force to operate in Syria’s sky? Russia has moved its SAM S-300 batteries closer to Aleppo recently. So you recon they couldn’t lock on incoming Turkish F-16 fighters before they bombed Kurdish forces in N Aleppo?

Your focus is to close on Syria. Russia is a world power and needs the world markets and the acceptance of the world and its institutions. Russia gets everyday blamed for things where other state can do what they want. There is a hole PR campaign against Russia running with this “White helmets” blaming for war crimes etc. Russia doesnt want to be the bad guy, and they are actually not the bad guy in Syria, but many, the world think they are, because of bad PR. Lets assume Russia would shoot down Turkeys aircraft, can you imagine or guess what will come next?

If they weren’t prepared for what would come next they should not have been there period. Have you ever heard for the game “Good cop, bad cop”? Please read your reply you’ve just answered it to yourself.

Sorry, I think you got lost in this mess and chaos of war. There are to many things that you and I and the rest here can’t know or understand. At least you are not an brainless Erdogan follower.

Are you little fgirl? Beacuse your speech is such. IF RUSSIA IS POWERFIL country, should not listen the blabla of other countries. Likae americnas. IF russia is week country, should stay at home and not have strong words.

Exactly. It did the same to Russian speaking people in Donetsk and Lugansk. It’s all done by big money in Russia.

The fading US administration is fishing for a casus belli and is desperate enough to take a second rate Gulf of tonkin 2 if need be. Russia has to play this one carefully. Admittedly it would e nice if Russia did some real-world-conditions testing of a hyperbolic missile on targets close to the Turkish boarder, but that’s not a realistic expectation.

Why not? So you recon Turkey’s army can violate Syrian airspace flying its fighters deep into airspace of the sovereign state of Syria in support of terrorists and that’s realistic expectation but for Russia to fly its fighters along the Turkish borders in support of Syrian army’s operations against terrorists is unrealistic. What kind of reality is that?

Of all the different sides in this conflict the Turkish enigma is the one that Puzzles me the most, or should i rather say the lack of response to Turkish aggression in both Syria and Iraq. It seems that this state is behaving like a “super power” and that no one is able to teach them a lesson in international law, Turkey has since long passed the mark of decent behavior, and behaves like a regional thug and does what ever it pleases, without any at all consequences, to it’s aggression against its neighbors. I don’t even want to mention the deafening silence from the U.N witch borders with insane or the Western MSM. The question is how far will the Turks have to go until they get an serious military response, that will really hurt them …?

Turkey is the third largest conventional military power in the world . Lets just say their numbers are large , as in personnel , equipment ( tanks – jet fighters ). Difficult for anyone to say anything , as everyone can see Erdogan is a loose cannon on deck . The US and Russia together would be the only military response that could really hurt them . And the EU is considering Turkey’s inclusion into the EU , on a military level only , that would be a complete surrender.

There are lot of countries, which clearly could destroy Turkey. Big army, but not so sotrong. Germany, France, UK alone withot problems are able to win war against Turkey.

No country can destroy Turkey with conventional weapons. For example: Russia is many times stronger than Turkey, but can they take over a 80million country with hard geographic logistical problems. Leaving alone the possible insurgency, remember how Russia suffered from 1.3million population Chechen insurgency.

Turkey should be militarily crippled and its leadership including clergy decapitated so it doesn’t pose a threat to any country in the region that’s all. It’s quiet possible. No need to exterminate 80 mil people. No need for an occupation or boots on the ground. You need only to destroy high value targets.

and that will guarantee a new pro-Assad administration? don’t get me wrong, I also view Erdogan as a crazy and dangerous guy. But I am trying to be realistic.

So what’s wrong with pro-Assad administration from perspective of an average Syrian citizen?

Oh you know, Assad kills babies, kittens and puppies and the beheading lunatics are peace-loving citizens who suddenly stud up to the dictator in their beloved country (not)…

mate i do understant your point, but we are not discussing the emotions or what is right. we are talking about political and national interests and capabilities.

Not quiet sure you do. Yes we do all that in the context of wright and wrong. I hope you do understand concept of justice, No justice no peace that’s how it works with humans.

since when justice is the priority? it doesn’t matter what we understant or don’t. we are selfish creatures. as long as the problem doesn’t touch us, we are not touching it. look at outcry in Syria and compare it to reaction of civilian death in Yemen. If it is the same and we humans are fair and just, then I take my words back.

Because it is not the Turkish administration’s job to protect the syrian citizen interests.

Exactly. That’s what the Obama administration has been saying all along. Please see ZP comment below.

yeah but it is not news. it actually is how things are supposed to be. Any country is expected to protect the interests of their citizens.

Look, Germeny how successfull was in the WW2? Today mountains does not play big role. And i tell you, the attacker find 25 million kurds as helper and the turks would have 2nd front behind.

In 1sz chechen war the russian army was in desolation. In the 2nd was already quite another game.

I am sure in hypothetical Turkish-Japenese war the japs would knockout the goatfuckers.

it is good that you mentioned ww2, no country was able to invade Switzerland. Could they? possibly, would it be easy no. But we are talking about Turkey that is the gateway between Asia and Europe and is much bigger. It was surrounded and isolated even taken over before with allies even from Australia, and we all know how that ended. And in hypothetocal Turkish-Japanese war, no one would win because none of them have a logistical capability to get to the other side. Are we stonger than the military of Mars? yes. Can we take over that planet now? of course not. This is not about who is stronger. It is about who can do it.

are yall kidding? Russia dont need to “take” Turkish cities to win an hypotetical war with it. Are yall folks typing from the balkanik wars in 1910?

Military Mighty Russian Special Forces Will Give An Unforgettable Lesson To Turkish Forces Very Near They Playing Their Dirty Military Game Wrong Forces & Wrong Battlefield..You’ll Get To Know This Bro.,

they might. but you cannot win wars with few thousand spec forces

Ronald, do not forget Turkey just sacked MANY experienced military officials, from their navy, army, and air force.

All this in my opinion is a part of the dance that was concealed, now laying out it the open. There could be a lot of shooting. The one who is really tangled up in the mess is the US. A goodday to all.

While Iraqi Army (shia, supported by Iran on the ground) is making gains in Mosul creating access for Iran, Iran/hezbollah might get access to european energy market, which Russia cannot allow, neither can Turkey. Before Russia makes sure that there will be no access, there will be no stability.