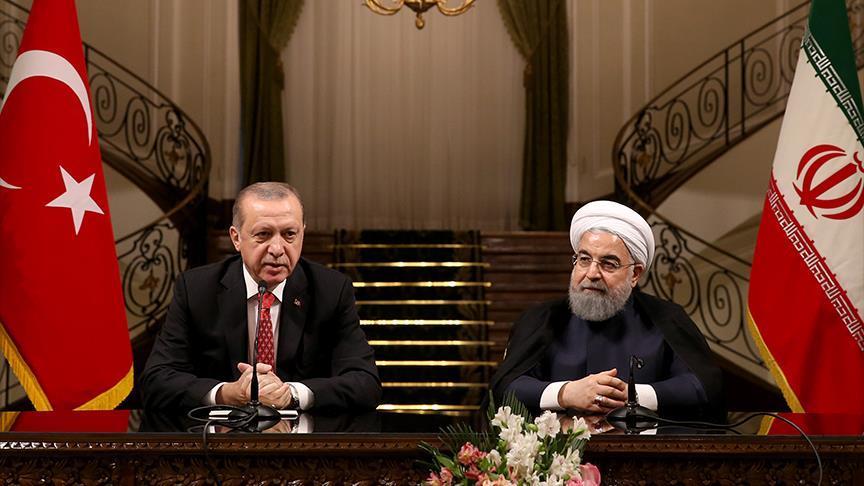 “We will not accept changing borders in the region,” Rouhani said during a joint news conference with his Turkish counterpart.

“Turkey, Iran, and Iraq have no choice but to take serious and necessary measures to protect their strategic goals in the region,” he also said.

Both Turkey and Iran, fearing separatist unrest in their own Kurdish minorities, threatened to close borders and impose sanctions on oil exports, with Iran and Iraq conducting joint military drills near the KRG borders on October 2. A small Iraqi force also deployed on the Turkish side of the border as part of joint drills with the Turkish army.

“We assure the international community that we are committed to a dialogue process with Baghdad,” he said.

Backed by Ankara and Tehran, the Iraqi government has demanded that the Kurdish leadership cancel the result of the referendum or face the prospect of sanctions, international isolation and military intervention.

corrupt barzani thinks the referendum would give him leverage in region now he slowly killing himself politically, Iraq Iran Turkey will never ever allow independence and prob wont have to even use military force, once a blockade/sanctions is activated and suffering begins KRG will toast him

Well the russians need the pipes flowing ro cehhan in turkey so turkey cannot switch off pipes even if it threatens to do so.so maybe barzani survives.

Iraq is now taking over all oil export and payment effectively cutting off Barzani clan from keeping the proceeds for the clan and not paying KRG salaries. Iraqi goverment says it will pay KRG salaries.

Barzani was not re-elected President by the Kurds for a reason. It seems the clan could also be held as traitors for transport and sale of ISIS stolen Iraqi oil as well. Things will get very interesting in the next 12 months.

Please god let it be so!

So there you go.not only were barzanibkurds shipping iraqi oil from their own region illegally but also for isis.what dogs! No wonderbthey did not help yazidis against isis.

“Iraq is now taking over…” nothing at all. Iraq is too weak to do anything.

“Iraq Iran Turkey will never ever allow independence” – they don’t get a choice.

“once a blockade/sanctions is activated” – not going to happen. Russia has $4billion invested, there won’t be any blockade.

I look forward to Barzani’s demise, but any notion that KRG isn’t going to be independent is lame and desperate propaganda.

Russia doesn’t figure into it they won’t want to upset 3 nations 1 which is an ally.

4 billion is nothing to Iran,Iraq and Turkey trade.

Its not going to be independent the “mighty” peshmega are overrated terrorists.

Iraq WAS weak but now that the distraction is almost over and the military is better trained and has combat experience and with Turkish and Iranian assistance independence is not going to come for Barzanistan or “Kurdistan”.

One buffoon meets the other.

One Neanderthal meets the other.

Planning a joint attack with Iraq, Syria, Russia and China. Probably to request unconditional surrender of all Kurdish forces in Iraq and Syria first.

Russia supports the KRG and Rojava. So does the US. China couldn’t give a f*ck. That leaves weak Iraq, and the Assad regime which is the weakest force in Syria. Not gonna happen.

Yes China might not care but at the sane time they won’t help the Kurds especially since they have separatists in their nation.

Russia does not support the Kurds.

Turkey and Iran are powerful and Iraq is not weak any more.

Looks like pro Kurds don’t factor in that their military success came with Iraq and Syria’s distractions now that it is dying down you guys are finished.