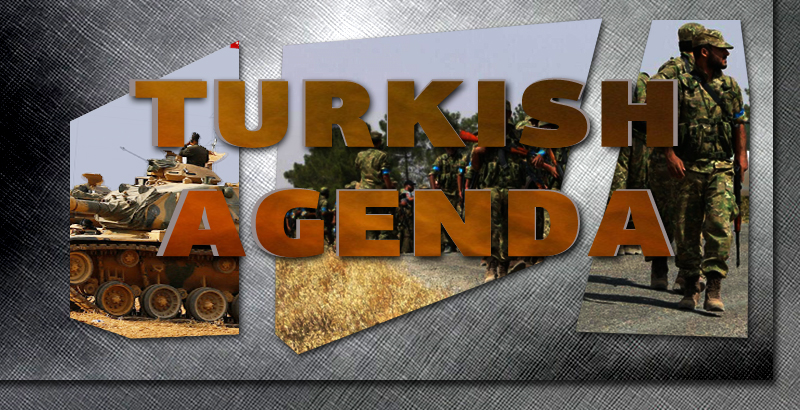 On Friday, the Turkish delegation led by President Recep Tayyip Erdogan arrived Moscow for talks with the Russian counterparts.

The situation in Syria and Iraq are the main agenda of the talks. Erdogan plans to have detailed discussions concerning Iraq and Syria during his meeting with Putin, spokesperson Ibrahim Kalın told reporters on March 9, adding that the results of the recent Antalya meeting of the top US, Russian, and Turkish generals would also be taken into consideration.

Ankara desires a diplomatic consolidation of its military gains in northern Syria. The Turkish leadership is specifically concerned with the following:

Strategically, Erdogan and his colleagues are concerned over the growing “de-facto” influence of Russia and Iran in the Middle East. In a similar vein, Turkey seeks to expand its own power in Syria and Iraq in every possible way. Here Turkey and Israel seem to be on the same page.

In this light, it is interesting to recall statements made by Turkish Ambassador to Israel Kemal Ökem earlier this week.

Ökem said that Turkey and Israel will be the primary beneficiaries of maintaining Syria’s territorial integrity.

On the one hand the assertion of territorial integrity of the Syrian Arab Republic is at odds with the real actions of Turkey on the ground. On the other hand, it fully corresponds to the maximum objectives of Turkish foreign policy in the region:

If Ankara is not able to achieve its maximum goals in Syria, it will try at least to set up a Turkish-controlled quasi-state in northern Syria. Then, Turkey will likely try to annex this area.

The Erodgan government is ready to allow more latitude in order to achieve its goals in Syria. Turkish leadership has prepared a bundle agreement which it believes should be of benefit to Russia.

However, this looks questionable because Turkey does depend on Russia economically, while the reverse is not true. This is especially clear in the energy and tourism sectors. Statements of Turkey’s Presidential Spokesperson Ambassador İbrahim Kalın confirmed this situation.

Commenting on the meeting between President Erdogan and his Russian counterpart, Kalin said that discussions will include the still incomplete “normalization” process launched in June 2015. Russia removed sanctions on some products, particularly on citrus fruits, but the majority of sanctions remains in place.

Ankara also wants Moscow to grant a discount in the price of natural gas imported by Turkey, to waive visas for business leaders and tourists, and increase the number of work permits for Turkish nationals in Russia.

For its part, Turkey offers Russia a cooperation agreement in the field of mining and the energy sector: the Akkuyu nuclear power plant and Turkish Stream projects.

The Turkish Stream natural gas pipeline project agreement between Turkey and Russia was signed in October 2016 and ratified by Putin on February 7, 2017. The discount in the price of natural gas imported by Turkey is directly linked with the progress of the project. Ankara will also benefit from gas transit to the EU.

Russia and Turkey signed the Akkuyu Nuclear Power Plant deal in May 2010. According to the deal, Akkuyu NGS Elektrik Uretim Corp, a subsidiary of the Russian state corporation Rosatom would build, own, and operate a power plant at Akkuyu comprising four 1,200 MW VVER units.

“It takes more than a year to review documents and therefore the main construction license is expected to be granted in 2018. At the same time, submission of documents makes possible for the Turkish party to issue a limited construction authorization already by summer 2017. Receipt of the limited authorization will enable starting construction of the so-called ‘non-nuclear’ part of the plant, for example, the turbine island, along with auxiliary buildings and structures. We expect Turkish partners will review documents as soon as practicable,” Chief Executive Officer of Rosatom Anastasia Zoteeva commented on the issue on March, 2017.

At the same time some experts consider Russia’s participation in this project as a big mistake, since they consider it unprofitable.

Ankara also proposes Moscow to conduct trade in local currencies. Economy Minister Zeybekci told reporters on March 9 that Turkish and Russian officials have discussed the issue and that a currency swap agreement was close to being completed. According to Zeybekci, the sides could sign the agreement during the visit to Russia. This proposal seems to be more political in nature, since at the current level of trade it would not yield significant financial benefits.

Turkey also offered to Russia the possibility of allowing its nationals to travel to Turkey without passports and only with their identity cards (internal Russian passports). Prime Minister Mevlut Cavusoglu announced the idea on March 9. In turn, he hopes Moscow would lift trade sanctions on agricultural exports from Turkey to Russia, as well as ease visa procedures for Turkish business people and truck drivers.

However, the mutual opening of borders or even easing visa restrictions now hardly is in the interests of Moscow because of high risk of terrorism and civil standoff in Turkey.

Don’t let them in Russia. Keep the visas and make it tough! As far as Russia being in Syria. Big screw you to Erdogan. They are partly to blame for destroying Syria. I like the idea of Russia being there permanently. Keeps the local maniacs in check.

This Erdogan is a filthy pun;k & a je;rk. Maybe NATO and Russia would be better without him.

The mo*f**ker blackmails everybody and the du*b Western politicians let themselves being maneuvered by this Osmanlîu- piece of sheep-sh*t. Doesn’t have anybody a cruise missile to blow his lights out?

Well,… once again PUTIN does what I expected => snake-politics, that’s what he can the best, that’s his “Doctor-work” since he was KGB-spy in Eastern-Germany => buying & selling sc*mbags and behaving like them, to have them at least partially under control, if it works

I don’t hear him protesting by Israeli or Turkish attacks on Syrian troops. Why are that f*king S-300 and S-400 good for if they keep them there as

… And the Americans infiltrate more & more Syrian territory, short-cutting the US-resolution that forbids them to push their nose into the Syrian air-space..

If fact ANYBODY that wants it, may fly over Syria so as that land would be some international zone :-(

To be honest, I don’t really like Putin since his FIRST “stop & go” at Aleppo in February 2016. The US crooks didn’t want to pay the price, bat Putin still wants to sell :-(. That’s my personal, subjective and humble opinion, sorry..

I still have the feeling that Putin tries to SELL ASSAD in exchange for the return to G8-RAPTORS-table, recognition of the Crimea-referendum and the NATO-withdrawal from the Baltic-States.

Putin becomes MORE and MORE… BRITISH.. ( You know what#s said about The Perfidious Albion : no friends, no enemies, just INTERESTS).

Obama & Kerry were dirty sc*mbags, but Putin isn’t better, if ITS interests are touched.. The SMALL nations between the “fronts” have to suffer because of these two major T-REX-raptors USA and Russia.

Syria is steal united because of President Assad if he is out the enemy plans will be implemented and sectarian violence rise.Turkey Erdogan will conquer all the regime supporter and destroy Syria.My God Jesus have put President Assad as a leader for his humble and outspoken kindness.i want all the Syrians and Kurds, Aliwatis to call Jesus name and say help us.Just for one three seconds.My heart is really paining for you suffering but My Jesus will help you if you call his name.

Looks like a very onesided Turkey takes all agreement…. hardly anything Russia would (ever) agree too… Typical Erdogan, 100% unrealistic … Even now that Russia has helped him out so many times and still is… Erdogan is completely wrapped up in himself… blinded by some fatamorgana only he sees…

It’s pretty clear that Turkey has lost it. They will be hard pressed in the years to come to not lose big parts of majority Kurdish parts of the country, A Kurdish state will become fact.

When a state tries to unseat the neighboring government and take control as Turkey has done, unintended and uncontrollable consequences follow – it’s inevitable. Erdogan gambled he could both facilitate and contain, full blown armed conflict within Syria. But the script may well have other interesting outcomes in longer term. When state like Turkey seeks to exploit ethnic and sectarian divides in neighboring state for its own benefits, it’s always prudent to consider whether they have own similar vulnerabilities.

This article really reflects the intentions of Turkey in Syria, annex or puppet state like northern Cyprus. The list of points which is their objectives…is just inadmissible, not even one of them.

Mr Putin, you are a fucking epic hero