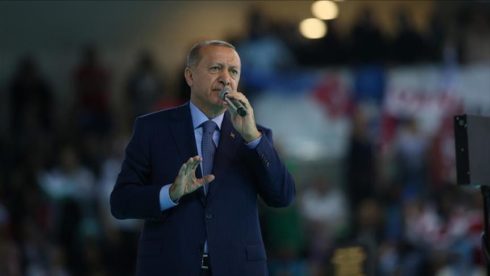 Ankara is going to respnose to symmetrically to US sanctions imposed on Turkey’s Justice Minister Abdulhamit Gul and Interior Minister Suleyman Soylu.

On August 4, President Recep Tayyip Erdogan said that his country will freeze assets of the US “justice and interior” secretaries in Turkey.

“I am instructing my friends today. We will freeze assets, if there are any, of the U.S. justice and interior secretaries in Turkey,” the president said speaking at ruling Justice and Development (AK) Party’s Women Branch congress in Ankara.

He emphasized that the Turkish nation will not step back because of “threatening rhetoric and silly decisions” of sanctions.

“Especially the latest step by America regarding pastor Brunson issue in Izmir, is an ill-fitted step for a strategic partner,” Erdigan said.

An August 1 decision by the US to impose sanctions on two Turkish top officials were justified by Ankara’s refusal to release US Pastor Andrew Craig Brunson, who faces terrorism charges in Turkey. This decision was the latest in a series of diplomatic and political incidents between the sides.

The US-Turkish relations are slowly deteriorating.

This is astonishing. How dare these NATO slave states impose symmetrical sanctions on the “exceptional” US? Who do they think they are? Independent sovereign states? Now we know why the US/EU/NATO/GCC Borg Empire instigated that coup in 2016. Erdogan would not play ball and do the imperial bidding. Turkey is in for a rough ride before it re-gains its freedom. Those Borg implants are the devil to remove and there can be long-lasting effects. A free Turkey will need lots of friends. I hope Dr Putin is ready with a sympathetic shoulder, just like Dr Crusher.

as
Reply to  VeeNarian (Yerevan)

Russia would still work with them that is certain. Though if they’re keeping the attitudes towards the other Russia allies Syria, Iraq, and Iran which the three may want to see isolated Turkey bleeds it out first before accepts them into the axis. As it is Turkey already in a dangerous position from the stupid game Erdogan plays against their NATO collaborators and Israel.

part1b Despite AIPAC’s efforts to get him un-elected he was re-elected Congress anyhow, unlike the great and fearless American Hero former US Representative Cynthia McKinney, a true American Patriot who tells the truth, the whole truth. Representative McKinney refused to sign this AIPAC Loyalty Oath to put Israel first even over America, which of course would be a direct violation of the Oath of Office any Member of Congress takes upon being seated. Why is it such a serious matter to get these signers of the AIPAC Loyalty Oath out of Congress? The reason is obvious, without these Traitors who are sellouts to AIPAC and Israel, America could not have been transformed into a virtual province of Israel. https://www.youtube.com/watch?v=ImFMcbF2MYY https://www.youtube.com/watch?v=ImFMcbF2MYY https://uploads.disquscdn.com/images/f55865fb69c1ef63394088d6108d0229b9671a10180006effaf42b9e90b875de.jpg https://uploads.disquscdn.com/images/65272ba33698043a57e8677e4dfb9b290550d79a0d39a7be6eeff14a12a9f86e.jpg https://uploads.disquscdn.com/images/e13b8bb9a5a25fd33bc47742b6f6dd77910dcfca90857294f6eaeb0c3eaa6929.jpg

Part 2 Nor could America have been transformed into an Israeli slave-state, provider and war-fighter for Israel with an endless supply of American Soldiers to use as Israeli cannon-fodder in their quest to expand and create “greater Israel”. https://www.youtube.com/watch?v=ImFMcbF2MYY https://uploads.disquscdn.com/images/2ba743d3099a50a48552252e6612f90f6010badbb32239d63c34e24fa6f013ba.jpg https://uploads.disquscdn.com/images/942928e4a2d7f53201f69fd469a245125e1da4dd5e27cae3a20a128041ee71d4.jpg https://uploads.disquscdn.com/images/f1524003ca53343e9fe2a1bebaa2d60329325dc88d3d29bc551dbc771fc32958.jpg Very few Americans know of this treasonous betrayal by all but one Member of Congress. This betrayal is a very serious, grievous violation of their Oath of Office and also American espionage laws and it constitutes Treason. Why do we know for certain this signing the AIPAC Loyalty Oath is Treason? https://www.youtube.com/watch?v=ImFMcbF2MYY We know this for certain because Treason is the capital offense of betraying one’s country and aiding or abetting an enemy of one’s own country, people and one’s government. Yes, but isn’t Israel an important ally of America

It is our job at Veterans Today and the rest of the Alternative media of the Internet to get the truth out to everyone and expose this USG propaganda, these big USG lies and USG false-narratives. Soon unless stopped the Internet, which is the World’s New Gutenberg Press, will bust the Controlled Major Mass media (CMMM) and this truth will dissipate to every America. This will bring an end to the espionage done against America in America by AIPAC, the ADL, the SPLC and other Israeli-linked foreign espionage fronts. https://www.youtube.com/watch?v=ImFMcbF2MYY https://www.youtube.com/watch?v=sqzDSrR4L4w

Haha nice nice, let the Americans see a little sanction, I mean everyone can sanctions anyone, it is a typical blackmail and extortion, that’s what are those US sanctions. So anybody can do that to anybody.

Erdogan is an idiot. He spits on friendly countries and hugs the enemy. Instead of working with Assad to control the Kurds and find some solution, he embraces Europe and America and now has sanctions.

I don’t care how many people he jails and executes, his time is limited. His ability to dictate is so bipolar that he will get ousted by the people or military or both.

He may soon find Syria, Iraq and Iran invading Turkey over water rights.

Erdogan, defending our world from evil?

Turkey joining BRICS could be ‘serious shock’ for US & EU, analyst

The dollar is only ditched by 2%. It means 98% of all International trade are still in dollares despite all this goldshit. When China, Russia, Iran, India and Turkey are kicked out to the edge, the gold will be manipulated down by Wall Street and London so there will be only muertas in BRICS+T GDP accounts. United States have you by the balls folks. Dream on hoping, as you have hoped for 400 years.

Tell me if the trade is between SCO and BRICS member states, so why they should use dollar, Euro etc when these countries already have their own currencies.

Trump pressurize allies because he wants to rescue US economy from collapse.

Trump will reduce military budget, will dismantle military bases in foreign countries and will stop funding for terrorists like ISIS, Israel, PKK etc to save American economy from collapse.

The US economy has been doing just fine and will continue to do so for a long time.

Because you are Zionist Israel and want to get charity of US$ Billions from US. But now that charity will stop for ever.

The russians could learn some tricks with the turks.

“……….if there are any assets”?? So its an empty threat. A boxing slap in the air. Barking against a potential intruder. Blowing up the frog´s corpus. A joke to show despise. Washington reminds of the minutes from the last days of the Nazi regime. Living in a denial universe.

Most foreign investors have left Turkey. Russian industries still have plants there.