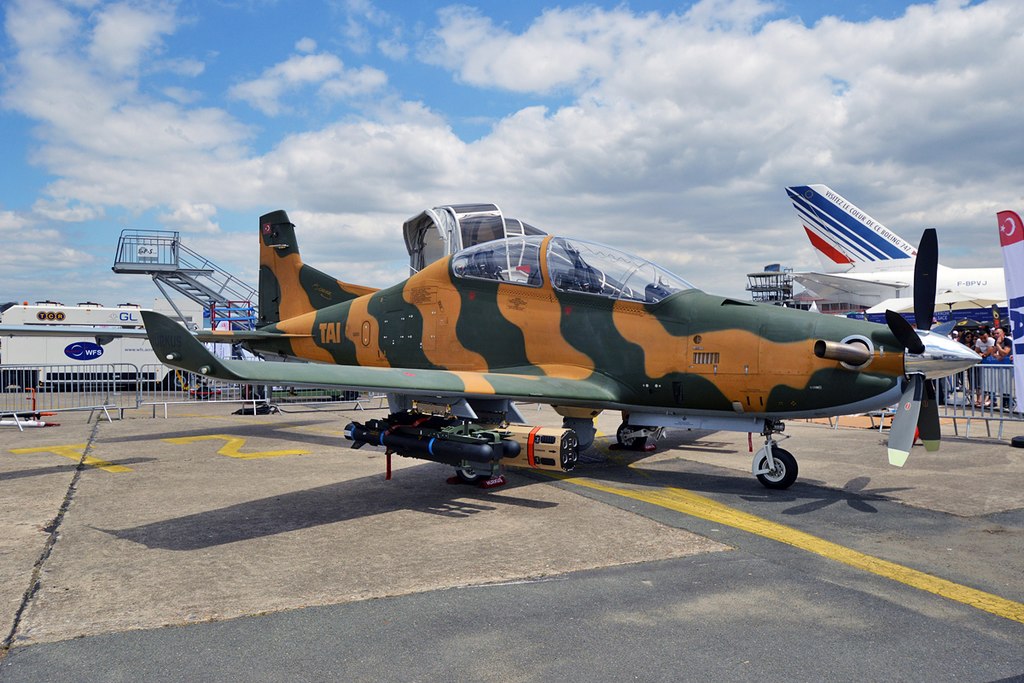 According to Kotil, a total of twelve Hürkuş-C aircraft will be exported to the customer, which will be named when the contract is finalized.

“We cannot disclose the country because the contract has not been signed yet, but it will take place,” TAI manager said.

The Hürkuş-C is an armed version of the TAI Hürkuş, turboprop aircraft. This version was designed mainly for the close air support role in addition to pilot training missions.

The armed aircraft can carry around 1,500 kg of weapons, including precision-guided munitions of different types. The aircraft can be also equipped with an advanced optical\infrared targeting system.

The customer of the Hürkuş-C may be Qatar, which bought billions-worth of Turkish weaponry over the last few years in order to boost its relations with Ankara. Other possible customers are Libya, where pro-Turkish forces have influence in the government, and Azerbaijan, one of Turkey’s closest allies.

These converted crop duster style ground attack aircraft are great for bombing poor people in flip flops with AK47s. Not much good against anyone with basic air defenses. Nice to see Turkey doing its part to make the world a better place.

Last time the U.S. used something similar was in he early stages of the Vietnam, war, with the Skyrader, they quickly switched to A-6 Intruders, even those were very vulnerable to radar directed AA and SAMs.

Are they willing to start WW3?

They’ll export them until they p*ss-off the Canadians that supply the P&W engines.

This news was disclosed after Bangladesh’s air force chief finished his 5 days tour to Turkey in April 28.

2) FM Mevlüt Çavuşoğlu went to Bangladesh few months ago along with arms delegations.

3) Ukraine – they definitely don’t need a propeller aircraft to face russians, they seem to have enough trainers (albeit jet powered). FYI, Ukraine did not release any RFI to suggest any turboprop aircraft for its air force as of yet.

4) Qatar – It has acquired 24 PC-21 trainers in recent years. Hurkus doesn’t meet its training doctrine at the moment.

5) Pakistan – Given US’s objection to selling engines for ATAK I choppers, doesn’t come out as a good candidate either

6) Another possibility can be Tunisia. However they ordered AT-6 Texan II to fulfill its primary trainer role.

Will Canada be okay with the engine re-export via Turkey? Well Canada didn’t object when they sold engines for Airbus’s C-295W for Bangladesh’s army.

Other’s input would be great in this regard.

50year behind the curve…

I would tend to agree with Bangladesh . Borders with India who they are very friendly with , Nepal to the north and Burma , who have enough of their own problems to cause trouble with Bangladesh. Bangladesh was of course East Pakistan until they broke away from West Pakistan , now just Pakistan with a war between them in 1971. So they aren’t really threatened or a threat to anyone.

Geee…….I wonder if it’s going to be Ukraine? Anything to try and draw Russia into the Ukraine conflict and make it look like their the problem through MSM propoganda.