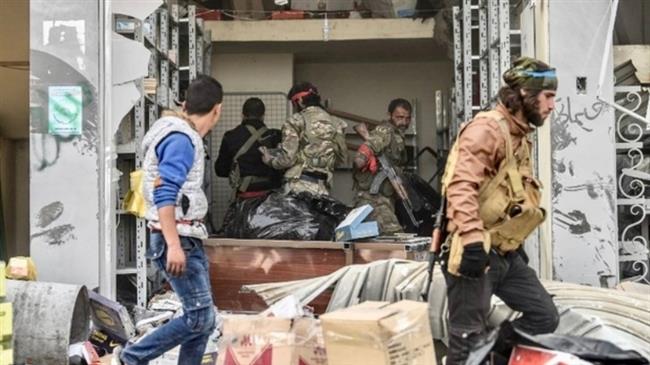 Turkey is planning to deploy some of its Syrian proxies in Libya to support the pro-Turkish Government of National Accord (GNA), which is facing an attack by the Libyan National Army (LNA), Bloomberg reported on December 27 citing a Turkish official.

The official, who was not named, told the outlet that the Syrian militants who will be deployed in Libya will be from ethnic Turkmen groups which have been fighting for Turkey in the northern part of Syria for years now.

“The Libyan government had initially resisted the idea of such a deployment but eventually accepted it as Haftar’s forces [the LNA] began to advance on Tripoli,” Bloomberg quoted the official as saying.

Bloomberg’s report was confirmed by the Middle East Eye, which said that Ankara had already reached out to several allied Syrian rebel groups about the deployment.

A Syrian opposition source told the Middle East Eye that Turkish-backed Faylaq al-Sham will be leading the Turkish proxy force which will be deployed in Libya. The force will also include fighters from the Sultan Murad Division and the Suqour al-Sham Brigades.

“Tripoli-based forces previously sent weapons and ammunition to help Syrian rebels in 2011. They even sent some commanders to help them … Faylaq al-Sham returned the favor by sending officials to advise Tripoli-based forces in 2014 against Benghazi forces,” one of the Syrian sources told the outlet.

The groups, which were named by the Syrian sources, are all members of the so-called Syrian National Army (SNA) that was formed in 2017 with direct support from Turkey.

A day earlier, Reuters reported that the GNA had formally requested “air, ground and sea” military support from Turkey, to fight against the LNA, which is attacking the country’s capital, Tripoli.

The Syrian militants’ involvement in the Libyan conflict will prove that they have become nothing more than mercenaries working for Ankara’s interests in the region.

THE ANGLOZIONAZIS KNOW THEY HAVE TO GIVE UP SYRIA, THE YINON-PLAN & IRAN IS NOT AN OPTION…. SO NOW THEY WILL GO FOR THE CONSOLATION PRIZE LIBYA…YOU ALREADY STOLE ALL THE LIBYAN GOLD…BUT THE OIL IS STILL THERE…OFCOURSE SUCK LIBYA BONE-DRY LEAVE IT BEHIND RAPED & COMPLETELY DESTROYED… ANGLOZIONAZI-BUSINESS AS USUAL…GO…GO…GoO..LNA DESTROY THE ANGLOZIONAZIS

A positive side to all of this is that Erdogan will have to send his best terrorists in Syria to Libya, and this will hasten the demise of the shitty terrorists in Idlib and Southeast Syria:)

I feel sorry for the Libyans though, as they are about to be further disenfranchised by neo-liberal terrorism.

Idlibistan proved that you have got to Herd them AngloZioNazi Headchoppers in one Spot & Exterminate them there…for they are Filthy Chickenshit Rats & they will be Exterminated again in Libya….Wherever these Filthy pieces of Excrement pop up…Exterminate them…let these Headchopping m*therfuckers come to Europe…. They will be Completely Destroyed…for they are Nothing but Childrapists, Killers of Women & Unarmed Men…The typical AngloZioNazi Mercenaries…Elites Beware! You have only showed to be Chickenshit Cowards! Hahahaha…

I meant the freedom fighters AKA the Wahhabis not muslims :D… BTW I never heard back from the white helmets in Canada, i wonder what they are are up to these day.

In the distant past , Britain and America etc would have sent government Cannon Fodder to brutally suppress the ‘Natives’.

In these days of ‘If there’s blame , there’s a claim ‘ , the UK military has also been constrained by political correctness and health and safety, that has essentially made the British Army a training outfit for wars they could not fight anymore.

Only today there is news that the British Military is being sued for damages by homosexuals who were kicked out of the forces from 1940 to a few years ago, when the military allowed LGBT’s into the forces, :)

This is why the UK,US and others have used proxy thugs who enjoy rape and pillage, plus the head chopping and torture fests, in recent years.

I suppose the British military does kill a few natives, but that is invariably from the safety of operating a drone thousands of miles away, firing missiles from other countries airspace, and in the case of the US, shelling Raqqa etc from a safe distance, so that these cities resemble Dresden in 1945.

Theres not much for the British people to be proud about these days. Perhaps there never was.

Their Original AngloZioNazi-Armies are to afraid to Die….they only Die on PlayStation 4 in Call of Duty….AngloZioNazis fon’t like Bodybags returnon’ home because their Sheeples will start Panicking…That is why they decided to Hire all sorts of Psychopaths, Idiots, Murderers, Rapists, Morons & Convicts to be their New AngloZioNazi Psychopathic Headchopping Boots on the Ground….

In play station and in Hollywood films and net series

Exactly, HH. When bodybags started to be flown home from Afghanistan after the NATO invasion there, the road from the airfield passed through a small town, and whenever a hearse passed through the towns people lined the street to show their respect for the fallen.

After a few years, this embarrassed the Ministry of Defence because of the numbers coming home in a bag. It was bad press essentially for a war that we were told, would not have any casualties.

There was a plan to build a new road to circumvent the town. I am not sure if it was built or not.

They go for the week oanes.. They are cowards.. and bullies.. They will never pick on someone the same like them

Perfectly said, these mercenaries-jihadists have no home of their own nor do they want it, they are mere mad dogs that only live to serve their zionist and muslim brotherhood masters, doesn’t matter where. Hopefully they all die. I know one day Turkey will try to conquer Balkan again and these subhuman scum mercenaries will be the 1st thing they try to use. Now if that happens, AND provided Bulgaria doesn’t turn on it’s Balkan brothers again, we will take Constantinople. :)

Turkey they can go fuck themselves. Turkey lost many times and they will lose again if they are stupid. Turkey will never be in Europe. I can guarantee that.

Cameron/Sarkozy having bombed the civilization and infrastructure out of Libya on behalf of Erdogan/MB by the looks of it. Turkey looks ready to now cut off Cyprus if ever it needs to.

Are them White Helmets going to Libya too?

I thought these ‘islamic’ fighters fought for religious reasons? I must have missed the chapter in the Koran which explains it’s OK to kill another, purely for the money.

It does mean that the terrorists in Idlib will get a free ride to Libya and Erdogan won’t have to defend them from the SAA. He secretly hopes they all perish in Libya after the main goal has been completed, that is securing more oil&gas fields.

You just don’t get it, do you ?They are going to libya to fight the murderous Haftar regime who is killing kids and women and bombing hospitals…

Where is the irony warning? :)

Yeah…and raping nuns and stuff. That Haftar character, chucking babies from their incubators so he can warm up his dinner. It’s a disgrace. It’ll take ages to warm up a dinner in an incubator.

https://www.answering-islam.org/Silas/swordverse.htm It is known as ‘the verse of the sword”.

to much CAPTAGON.. they are long gone.

So.. moving and relocating of terrorist groups is now official strategy in politics?

It’s never official, but practical, and we have plausible deny-ability.

I have read on some MSM page that “Syrian rebels” will be used by Turkey in Libya. The whole rebel narrative is pretty false when they are used to fight in another country, don’t you think? Maybe MSM should use the more correct term “Syrian mercenaries”.

Hope Egypt will take care of them

That is good, as even in Syria they were defeated by the SAA in any serious battle. I expect them to be equally successful in Libya too.

Faylaq ash-Sham is part of the Turkish controlled so-called Syrian National Army – it was the main jihadi gang which sliced the Afrin Kurds like a knife through butter in 2018. Since then it has been re-organized on regular army lines, with a proper chain of command, well trained and equipped by the Turks and grandly re-badged https://uploads.disquscdn.com/images/d0f35b3e31836da996ab58e28d6990bec8dbc9091c707063daaf589fb6ac0c91.jpg 141 Brigade/14 Division SNA ! – but it is one of the more capable and disciplined jihadi groups and should not be under-estimated.

no doubt.. it is a lifestyle..

I wouldn’t think of any Turkish troops on Libyan soil, but just technicals like drone operators, etc. Erdogan has a wide range of mercenaries, but those are mostly old islamic terrorists. On the other hand Sisi & Haftar are secular dudes, but contrary UN supports jihadists supported GNA. What a mess…

They are all our proxies