Long after the Trump administration indefinitely suspended deliveries of Lockheed Martin’s advanced stealth F-35 fighter to Turkey over its controversial deal with Russia to obtained the S-400 missile defense system, Ankara is ready to go ‘live’ with its Russian anti-air missiles in a comprehensive test.

Turkey was officially and finally kicked out of the F-35 program in summer of 2019, also amid threats of sanctions from Washington, as it was feared Russia could use the S-400 and its radar to obtain valuable and secret information from its Turkish partner on the Lockheed stealth fighter. This unwavering stance cost the United States at least half a billion dollars, according to reports at the time.

Throughout the whole diplomatic saga and standoff which took US-Turkey relations to an all-time low, compounded by Turkey’s attacks on Syrian Kurds which were being supported by US troops in northern Syria, Ankara didn’t blink. This even as Washington offered the Patriot system as an alternative to Russian air defenses.

And now Turkey’s military is for the first time moving forward with field tests of the S-400. Bloomberg reports Tuesday that “Turkey is planning to conduct a comprehensive test of the S-400 missile-defense system it purchased from Russia next week, according to people familiar with the matter.”

“The air force isn’t activating the batteries, but testing equipment as well as the readiness of Turkish personnel at a site in Sinop province on the Black Sea coast, the people said,” Bloomberg continues.

A NOTAM was released that closes the airspace for 10 days due to air defense system/ drone exercises in Sinop, which might be the final destination via @kamerknchttps://t.co/vz1xtoP7vc

This has reportedly triggered a flurry of diplomatic activity and protest out of Washington, also as a new crisis is unfolding in the Eastern Mediterranean between Turkey, Greece, Cyprus and European allies. The EU and US have backed Greece and Cyprus in condemning expanded Turkish hydrocarbons exploration and drilling around Cyprus and near Greek islands.

According to Greek media reports, Turkey is already using radars provided Russia in connection with the S-400 systems to track Greek aircraft in the Eastern Mediterranean.

The Greek daily Ekathimerini writes, “The indications that Turkey activated the radars of its Russian-made S-400 anti-aircraft systems in order to detect US-made Greek F-16 fighter jets on their return from the Eunomia exercise on August 27 off Cyprus apparently sounded the alarm in Washington about the situation in the Eastern Mediterranean and reportedly prompted the visits by US Secretary of State Mike Pompeo to Cyprus on September 12 and Greece on September 27-29.”

“The visits highlight how Ankara’s procurement of the S-400s is irking Washington, which has threatened to impose sanctions if the Russian system is activated,” Ekathimerini continues.

Thus whatever “message” Pompeo conveyed last month certainly appears to have gone unheeded given Turkey’s reported preparations to conduct tests of its S-400’s. Meanwhile Washington sanctions are still reportedly on the table. But of course Turkey could retaliate with measures of its own, including booting US forces from the country, as the inter-NATO rift continues.

“The visits highlight how Ankara’s procurement of the S-400s is irking Washington, which has threatened to impose sanctions if the Russian system is activated”

There’s only on thing Pompeo hates more than being disobeyed,

“Thus whatever “message” Pompeo conveyed last month certainly appears to have gone unheeded given Turkey’s reported preparations to conduct tests of its S-400’s.” 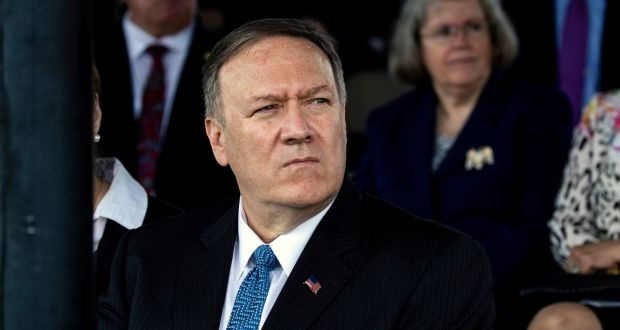 “Now we must destroy Turkey. They have ruined my childhood!”