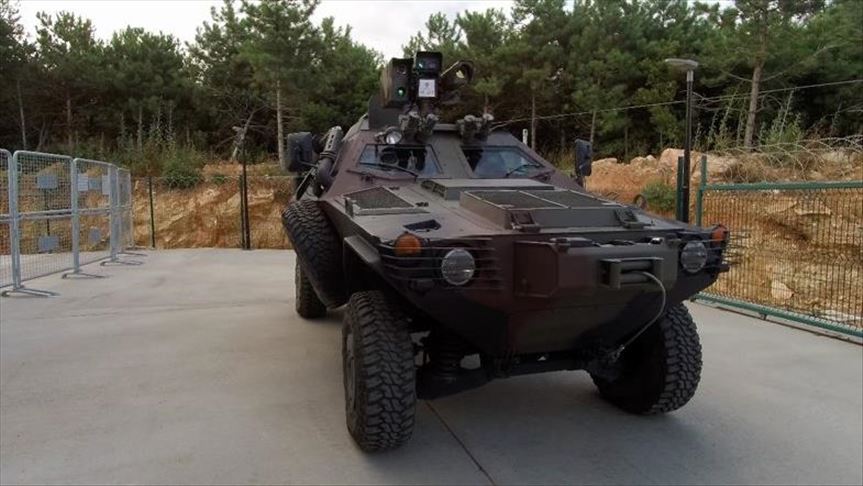 Turkey successfully tested a ground-based combat laser with the designation ARMOL. This was announced by Turkish Minister of Industry and Technology Mustafa Varank in a video published on Twitter.

“The national laser gun ARMOL has passed acceptance tests successfully and has been qualified to enter Turkish Armed Forces’ inventory.”

The laser had perforated a steel sheet, destroyed an explosive charge and brought a small drone from the sky, wrote Varank.

ARMOL was developed at the Informatics and Information Security Research Center of TUBTAK, a national agency playing a leading role in the creation of a science and technology culture in Turkey, successfully completed acceptance tests. 1.25-kilowatt laser gun is able to damage three-millimeter steel plate at a 500-meter range.

The 400-kilogram (around 880 pound) laser system, for which studies started in July 2018, is planned to be integrated into aircraft.

TUBITAK is also developing other laser weapons, including a 20 kilowatt laser gun.

In early September, there were reports that Turkey carried out the first ever use of a weaponized laser in a combat situation.

According to reports, a weaponized laser shot from a combat vehicle destroyed a Chinese Wing Loong II drone, used by the UAE to carry out reconnaissance for Haftar’s Libyan National Army. The Turkish laser allegedly shot down the UAV in mid-flight.

“Turkey is not sufficiently recognised in the ranks of the countries-innovators in military affairs,” Alexander Timokhin wrote for Army Recognition on Monday. “But it seems that they will be able to surprise the population of the planet in this century.”

Even personnel without special training could use these new weapons, and the cost of firing the laser gun is equal to the price of diesel fuel spent during the shooting, Timokhin added. And this is big news, since Russia and the US are considered to be leaps ahead of Turkey in terms of laser technology.

“This is all the more surprising because both Russia and the United States are superior to the Turks in laser technology,” said Timokhin, adding that both do have laser weaponry in operation.

“But ground-based combat vehicles with tactical-level lasers are not being built and used in Russia or the United States. This is done by the Turks,” he added. “In the future laser arms race, the Turks have already claimed a prize for themselves.”

Combat lasers are already being tested in the armies of some countries, including the US and Russia.

“This type of weapon will decisively shape the fighting ability of the Russian army and navy throughout the 21st century,” President Vladimir Putin said in June 2019 at the presentation of the Russian combat laser Peresvet, which is expected to be operational by the end of the year.

In December 2014, the US Navy tested a laser weapon onboard the USS Ponce” – the Laser Cannon XN-1 LaWS.

If this weapon really exist and works – and there is big IF then it can be good only as anti-UAV weapon with cooperation with some radar ….. That what we see is at video is some optically locked system which CAN work only IF you know about enemy drone – and that is speculate in war conditions ….. Using aganst ground targets is that humorous part ….. 3mm of steel at 500m for more then 5 sec is so much in these days …. It can be used only as deffensive at “sniper” mode (hidden and undetected for long time)

This device could come in very handy for cooking kebabs whilst on maneuvers. They will have to go to Idlib for the salad though.

As I have always stated LASER weapons are no longer only the future, they are here today fully deployed from the Persian gulf to the border of Russia and with the Chinese army. If Israel acquires deployment of laser defense systems before the next big war, then 90% of incoming projectiles are going to be successfully downed. And also, if Iran or Syria could deploy laser defense systems near the new border crossing between Iraq and Syria, then no more missiles with successfully hit anything at the crossing ever. Wherever deploys in mass laser systems first wins the next war for sure. If both sides deploy that will be interesting. If only one side deploys laser and the other side does not have them, then the side without them will loose for sure.

No it does not. The field that photons alone operate go far beyond the human visual spectral range on both ends. Not to mention the other waves in the full spectral range of energy. Lasers often are not even visible to the human eye and pass right through any cloud. Lasers operate from the X-band or UV band or Violet band or Deep Red band or Infrared band. Just like how thermal scopes see right through clouds and dust because of waves you cannot even see, so does the same wave lengths freely pass through any rain cloud or dust cloud. Do your homework and stop playing with laser pointers for cats because you do not understand wavelengths. https://d2jmvrsizmvf4x.cloudfront.net/lqfJrASnQ0GrsLviicAQ_Visible-spectrum.jpeg

Main limitation on laser weapons is power consumption. I think one would need 100kw+ to take out targets faster. Another is range. I assume all wavelengths would be degraded in the atmosphere over distance, because of loss of beam focus?

You’re not a zionist shill are you?

SAA, syria, iran, hezbollah need laser weapons more than anyone else, they are the ones actually fighting a real war at this time