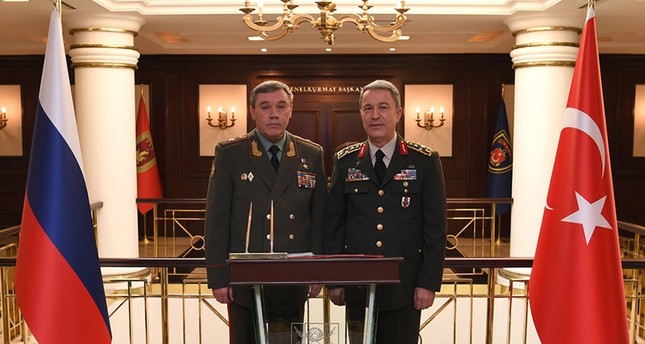 Turkiey will coordinate its air operation against Kurdish militias in Syria’s Afrin with Iran and Russia, the country’s foreign minister Mevlut Cavusoglu told CNN Turk on January 18. The minister added that Moscow should not oppose the opeartion and Ankara will coordinate on the situation of Russian observers in the area.

The meeting comes amid public preparations of the Turkish Armed Forces for the operation in Afri. The area is controlled by the Kurdish Democratic Union Party (PYD) and its armed-wing the People’s Protection Units (YPG). The both organizations are described by Ankara as terror groups and local affilates of the Kurdistan Workers’ Party (PKK).

Very good thing, meaning Russia and Iranian have the upper hand in Syria

This is unexpected but I’m glad to see it.

Turkey biggest problem is not Assad but the Kurds.

Turkey is going full in thats what it means. They have mobilized and have been mobilizing for long time. Russia try to stop them but failed. The clashes between turkey and Afrin is serious and to late to de-escalate at this point

Kurds in Afrin , their Fate already sealed. No one supports them

Not necessarily. There are many special forces ways to sabotage the Turk’s military equipment- directed energy weapons that fry electrical components, ect.

All they ever do is shell.

With the recent green light from the US, it seems more like Turks coordinated with the Americans. Turkey’s operation is targeted against Afrin, which made and makes less trouble for Syria and trash-talks less against Syrian government and cooperated with it in the past, unlike SDF in the eastern side of Euphrates.

I agree that it stinks but this is aimed at all Kurds – including SDF. Many here say that Afrin Kurds are totally separate from SDF Kurds. Well they are in some sense and that’s what would be shown to all Kurds. “Be loyal to your home country because as separate entity you’ll be swallowed by Turkey” – sad but true.

Perhaps you’re right but I believe it’s not aimed at all of Kurds in Syria. Turkey is more than happy to export all PKK on it’s soil to the region east of Euphrates, as long as they can portrait them as some kind of terror puppet in the hands of US which “stole” land from Syria, but an autonomous Kurdish region with the consent of Damascus will be a nightmare for them

Afrin is among very small areas that had Kurdish population before 2011 (with Ayn-al-Arab which many know as Kobani and Qamishli, north of Hasakah). They supported president Assad at the early years of war, before creation of SDF.

Syrian government offered them autonomy, which the very same US that now wants to create a Kurdish country by partitioning Syria spoke against it, saying that the US supports sovereignty of the whole Syria and will not recognize a Kurdish autonomous region in it!! This move by Syrian government angered Turkey greatly because if Kurds in Syria have autonomy, Turkey will be forced to give something to it’s Kurds too, and they prefer death before doing so.

The possible following step will be annexion of a “buffer zone” by Turkey between so called Kurdistan and Turkey. Erdogan is pursuing his dream of new Ottoman Empire, expanding in Syria. I don’t think theses territories will then be handed over to Syrian Goverment. As I finally understood someting always true: “Never trust the Turkish”

What can we do… let’s wait and see but I still think that it is aimed to all Syrian Kurds and beyond https://www.almasdarnews.com/article/turkeys-concerns-legitimate-pentagon-kurdish-border-force-syria/

syrian government never offered autonomy for kurds. just this is the problem

You and I have more in common than I thought. We both edited our comments separately adding the same news from different sources (mine is Sputnik). :D

…Which reminds me, any news about my raise from Tovarishch prezident? It’s snowing and I’m cold, what kind of friend are you?

You and I have more in common than I thought.

bad advertisement for you

of course! until exists jihadists, a can not die. :)

So you are the last Jihadi…

Or, may be we must exterminate Solomon to get rid of those Jihadis all over the planet? ROFL!

Solomon is a J£w Jihadi. They like to murder children and men with no legs.

Solomon is alive in body only judging by his remarks Garga :)

We should not be in a hurry with such important developments :) I don’t know if you read Bulgakov’s “Master and Margarita”. There’s a scene where Woland (character representing dark lord) says: to predict anything one has to have at list a short term plan. 1000 years at the very list.

yeah, you russians want be always slow. and you oversleep your defeat. like in cold war. wake u ruskie, this is not the 19th century. here is no place for long chess games.

Another article, another pointless Solomon anti-Russian rant. Ever predictable.

assad shall give them rights. e.g. constitution guaranteed schools and using of their language.

No way it is aimed at SDF.. SDF are US troops. This is aimed at isolated Kurds in the northwest that never the US cared about. The goal for Turkey and NATO is to occupy the more territory possible in Syria using proxies and mild regular troops presence that could be increased if necessary. The goal is to have considerable assets in place when the atlanticist coalition will decide to move against Damascus.

US never cared about Afrin Kurds… But other Kurds do. Not aimed at SDF? How about this: https://www.almasdarnews.com/article/turkeys-concerns-legitimate-pentagon-kurdish-border-force-syria/

They are still in idlib daret izza area and still in al bab and jarablus. Lets not overestimate russian diplomatic power, trkey is still doing what it wants.

This is good news. However, Turkey must have in mind that it has to leave Syria after all and go home.

That would not be easy (having Turkeygo home) but surely easier than kicking out US.

turkey will not spend mones for this war and then leave syria.

Turkey is trying to land grab, where USA is trying to buffer the Turkish expansion into Syria. Turks are just as complicit in war crimes and criminal boarder activity (aiding ISIL) as rotten factions of US and others (UK, France, Saudi Arabia, let’s not forget- Israel)

they hope to get the ‘go ahead’ from Iran and Russia…thats the meaning of all this…..they know that US will not tolarate a military operation there…..bombing some fields like us does 3-4 years now is a minor thing….did anyone see pics of victims in Afrin?i haven’t…..they are target practising in the ‘desert’…..

clear evidence, that russia betrays syria. why? because:

Well, this is not a good sign for SDF/YPG. Most probably Assad will let Turkey wipe-out militants of YPG in the region. This both serves to national security of Turkey and sovereignty of Syria. It is a pity, seeing Kurdish forces as a puppet of US. It seems too late for them to say “sorry”

What you speak of is mass genocide on the scale of Wounded Knee and Armenian genocides. We live in an age where if this happens, world outrage will erupt and karma will ensue faster than you can say jackrabbit.

If anything the world is very selective in its outrage.

Those with access to reliable media and communication technologies who’ve educated themselves on these matters have spoken out in outrage, it’s just been a very marginalized topic in the mainstream media- aka media blackout.

Those tend to be labeled as rightwing kooks. There are of course no leftwing kooks protesting instead, because they are too busy with civil war statues, naughty language and #metoo. One side gets marginalized, the other easily distracted.

The border is flexible on the other side also. What Turkey does is to create an united kurd nation by adding a meaning to it.

The question is if Turkey are gonna change.. Al Qaeda turkistan party instead of kurdish…remove US puppets to put Al Qaeda there is bad for Syria goverment!

This would be the biggest mistake Turkey can do. Russia will secretly relay the information with the kurds in Afrin. The Russian can’t be trusted.

I know it’s the not the voice of Assad that matters anymore. Russia has different motives than Assad but they use him as the means to achieve that. You will see Putin backstab Assad. Because Assad is is dog with a long leash.

sometimes i had the same feelings/thought to agree with you about russia in that manner too, but im still looking at action/s taken by russia (hints/clues) to confirmed.. as russia is playing with too many cards and carries too much burdens & obligations and doing too many things at one time with its allies and its allies enemies and that also included (not to mention) its partners..lol peace..

Russia and Iran have no legal status to negotiate with Turkey over Syrian sovereignty.

So why is Erdogan’s government so eager to enter into negotiations with them?

For me Turks will always be as foolish as treacherous. Instead of allying with him to fight their enemies in common, Erdogan chooses to criticize and ignore the legitimate leader in Syria, while trying to convince Assad’s best friends to let him do whatever he wants in Assad country, where they themselves, Assad’s best friends, operate with the explicit invitation and agreement of Assad himself. Sounding as silly as asking permission from your neighbor’s friend to enter to your neighbor’s house, to use his bathroom and take food from his refrigerator, without any permission and agreement from your neighbor, the owner of the house. Incredible!

Long time no see. Hi, how are you? Nothing bad or serious happened I hope?

I am very well my friend, a long time ago without commenting anything, but always aware of the good and solid comments of several of you here, including you of course. Thanks for asking