Russian state energy company Gazprom and the Turkish government have reached a deal on the construction of the land part of the Turkish Stream gas pipeline, which is designed to bring Russian gas to European consumers.

The sides signed a protocol that would allow the construction, previously stalled by a legal rift over gas prices, to go forward.

According to Gazprom, the Russian company and Turkey’s state-owned BOTAS struck an agreement detailing the terms and conditions of the works. The Russian stage giant also noted that the deal “allows to move to practical steps for the implementation of the project.”

The works will be carried out by a joint venture called TurkAkim Gaz Tasima AS. This venture will be owned by Gazprom and BOTAS in equal shares, according to Gazprom.

Didn’t Russians get the memo from the west? NO evil Russian gas is to be sold in Europe – only ‘friendly’ Israeli-controlled gas is allowed. Turkstream is anti-Semitic!

Now because of this: 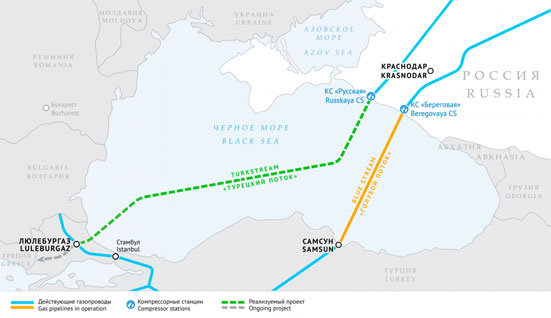 … U.S. and EU taxpayers are going to have to hurry to pay (one way or another) for this:
http://interfaxenergy.com/uploads/media/ngd/1406890908.jpg

… unless the EU just makes Israeli-controlled gas mandatory by law and outlaws Russian gas completely. It’s the least the EU can do for Israel. You owe them for something or other. Pay up!

“evil Russian gas” is 1/3 of all gas that EU uses every year…this year even slightly more…
so I am missing your point definitely.
Maybe you know something I do not know

Turkish Stream will be there on Greek border and it is up to those lunatics to decide if they love more US or big profits from gas.
If Germany can have 2 Russian gas pipelines and total control of EU gas practically…why not Greeks and South East Europe can’t have some if it is under their nose?

You’re only missing my sarcasm, Dr. PL. The Khazarian Mafia (aka Neocons in the US, not sure what the bastards are called in the UK) seek the total economic destruction of the Russian Federation.

Sure, the Khazarian Mafia is still pissed off about getting booted out by Putin during their post-Soviet pillaging of the Russian people, but that was offset by the billions of their Russian loot they took with them. I understood they were big customers of Trump’s Florida real estate projects. But I digress – what really set off the Khazar Mafia was when Russia fucked up their takeover of Ukraine. Ever since then, the Khazarian Mafia MSM narrative in the west has been incessant: EU buying Russian gas = supporting evil Russia. EU must ‘diversify’ its gas supply for its own security – away from evil Russia and preferably from some Khazar Mafia-approved and profit-producing source. Israel, GCC, Turkmenistan – anywhere else but Russia and Iran.

Disqus was bought by Zeta Marketing this year to harvest and catalog posts for certain ‘clients’. Silent censorship by marking posts as spam seems to have started at the same time. This was my reply to you: 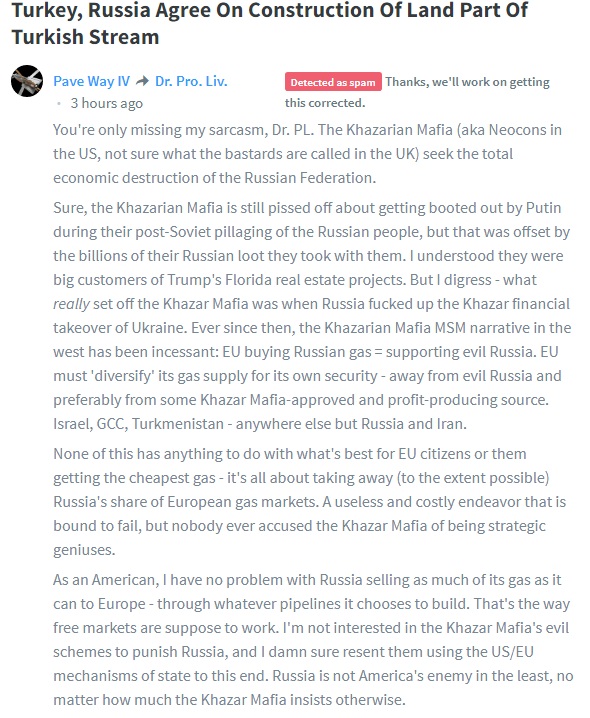 Thanks on both – warning and the large explanation.

If they let you to kiss their ass for free why they can not giving gas for free?

Who the fuck cares about money ??? XD.

I don’t read anything like “for free”. What do you mean they get it “for free” ?

Woken up yet to fact that contrary to the shill postings by Russian pro and amateurs of Russia being at “war” with “One World Order” they are part and parcel of that order.
They, as has China, came lately to the game and by mainly limiting domestic spending increased their presence internationaly by granting trade terms far less costly and thereby more rewarding to their partner nations.
Name an historical period when Russia was not emulating European culture, it cannot beat out China’s growing economy which will soon have major major interest in all Asian nations and so is “partnering with China, a mutually financially rewarding ventures to gain more EURO market shares.
Turkey will eventually pipe oil from old Syria
now US US co trolled KURD fields.
US is recipient of hundreds of billions of direct and black money investments by Russia gov ang oligarchs.
Almost all world’s nations are no more than vying for favorable positions in the almost complete New World Ordering of one global financial system.
The new colonization procedures are far more sophisticated gun and knife or else of old systems, with a couple only of new players.
Does are cast over who gets what whenever some player gains a temp advantage, but all in all little nations with rich resources are totally screwed, and in future will make no diff if by Russia, China, Euros all paths to self determination will be blocked by them.