On September 4, the Turkish military resupplied its besieged observation post south of the Syrian town of Murak in the northern Hama countryside.

“The Turkish vehicles came from Maar Hattat post in the outskirt of Ma`arat al-Nu`man in southern Idlib, they took the highway passing through Khan Shaykhun until they reached Murak,” the outlet’s reporter said.

Last month, the SAA besieged Murak’s observation post after clearing the militants’ positons in northern Hama. Units of the Russian Military Police were deployed around the post later.

Turkey had refused to withdraw the post, which was established last year in the framework of the Astana Process. The country’s Foreign Minister Mevlut Cavusoglu even denied that the post is besieged by the Syrian military. That is an over-statement. Russian airpower did make a crucial difference, but Iran, Shia militias and Hezbollah have done all the heavy lifting and would have prevailed anyway after the SAA revamped from a large conventional force to a lean, mean, hard hitting COIN force. Normally it takes a decade to reconstitute a military, especially in the middle of the worst terrorist campaign in the world. However, SAA was able to get its act together by 2017 or in 5 years. The liberation of Aleppo and cleansing of Daraa were the turning points.

And the liberation of Aleppo and Daraa were achieved with the help of Russian air support. Calling Putin a zionist is just retarded considering he literally RUINED their plans in Syria

No doubt they were flying the Red Crescent flag and not the Turkish one although one thinks it is a star being the only difference. I guess they need to eat otherwise how are they going to fill those toilets. I imagine the convoy was escorted there and back to prevent ” sight seeing ” along the way. Who cares if they wish to stay there and be impotent .. Turkeys problem to resupply them when it suits the SAA..

I agree but it is a joke that Russia is now protecting the Turco rats! What a disgrace .Syria should have “accidentally “wiped out the whole base by a ” mistaken” missile strike.

“Oh sorry Mr Erdo and Putin ,our general was a little eager …you know how these army brats are. Sorry….” ** cough cough**

And if was Assad, i would not allowed them to leave when they will want (and they will) until they would complain publicly that they are hold as a hostages :))

Russia, Iran and Turkey agreed too allowing these posts and will uphold their agreement. America was not involved so going back on the agreement is not an option. If they stay what can they do ?. They can hardly go outside their compound so they are effectively in their own jail. Who cares.

They agree certain number of these posts 6 or 9….. not the number they have now.

Fair enough. I thought having these in the first place was a load of crap but I wasn’t asked my opinion when they made the agreement..So this is one of their original posts and they wish to stay so it counts as ONE of their agreed posts. That means any extras which will be in in near point of contact lines has to go. Why are they having another ceasefire when none have worked before. The whole setup seems a little strange .. but Assad is still there so as far as I am concerned that is what I am interested in and as long as he stays there …

Can the Syrians charge them rent? Maybe a local bus company can arrange a trip to see local attractions / restaurants / water park? Golf? Take in a show? Just because you’re irrelevant and abandoned in a hostile country doesn’t mean you have to live like a monk and why not let local businesses make a buck off tourism.

Well, terrorists need more support from Turkey (NATO member), that is all.

I think Turkey is holding out this outpost as some kind of bargaining chip against Russia, to be resolved in the near future. I can’t explain it any other way. But from the outside observer’s point of view, it looks pretty ridiculous.

Observation Posts my arse. The Turkish Turds fucked the Astana Agreement from the get go. Erdogon is as slippery as an eel and as faithless as a Sultan, he furthered the interests of terror rats, his knavish proxies supplying them with state of the art equipment from these so called observation posts. There must be at least 200 rats holed up in Murak. This is the real reason the Sultans Turds are sitting tight

What Syria should do is establish a military compound sharing two common walls/sides with the Turkish outpost. Literally touching the same shared boundary, peacefully intruding on their personal space… A Syrian soldier to a Turkish one at dinner time, “Can you pass the salt please?”

Can anyone explain, how can Turks re-supply their post at Morek if it is besieged by SAA ?

This camp has never been besieged, but it is cut off and isolated (this is the better word to use).
Turks had to make arrangements for resupply, but they are free to leave by all means.
If they want to stay longer, Syria should charge them with very expensive rental agreement.
Right now they are observing how peaceful it is without any Jihadist rats around :D

Simple. Russian military police surround it so protect them ,so Turco who is now friends with putin can do whatever he wants and Assad can do nothing.

Syria was either too stupid or too scared to seize the advantage whilst they had it.Russia probably wagged their finger at Assad saying ” no you touch my new Turco -kebab friends now ,you here!”

Symbols are very important and a symbolic destruction of the base or public capture of turcos , would have gone a long way in humiliating the turks,showing russia that we do not sacrifice our interests JUST for russia to win out of it and to further hearten Syrian loyalist at home who are in their eighth year of war!

WWII only went for five years in reality!

This is a most bizarre situation, the Turkeys should be roasted with Kornets like the Zionist scum. Maybe they can then stage a fake helicopter medivac for Kentucky fried Turkeys.

By agreement (Astana Sept2017 and Sochi Protocol) which created the so-called De-Escalation Zone, Turkey has 12 OPs inside the zone, Russia 10 and Iran 6 on the outer perimeter. Turkey has built fortified bases at their locations, including OP T-9 (Morek) OP T-10 (see foto) and OP T-12. These are obviously not just passive OPs but forward bases to support their jihadi proxies . However these have never been “besieged”. OP T-9 can, and is, resupplied by agreed road convoy and or heli-lift/drop if needed. Like everywhere else the Turks invade and occupy they will only leave if driven out in war. So far no , for all the talk, no country will go to war on Turkey on behalf of Syria. 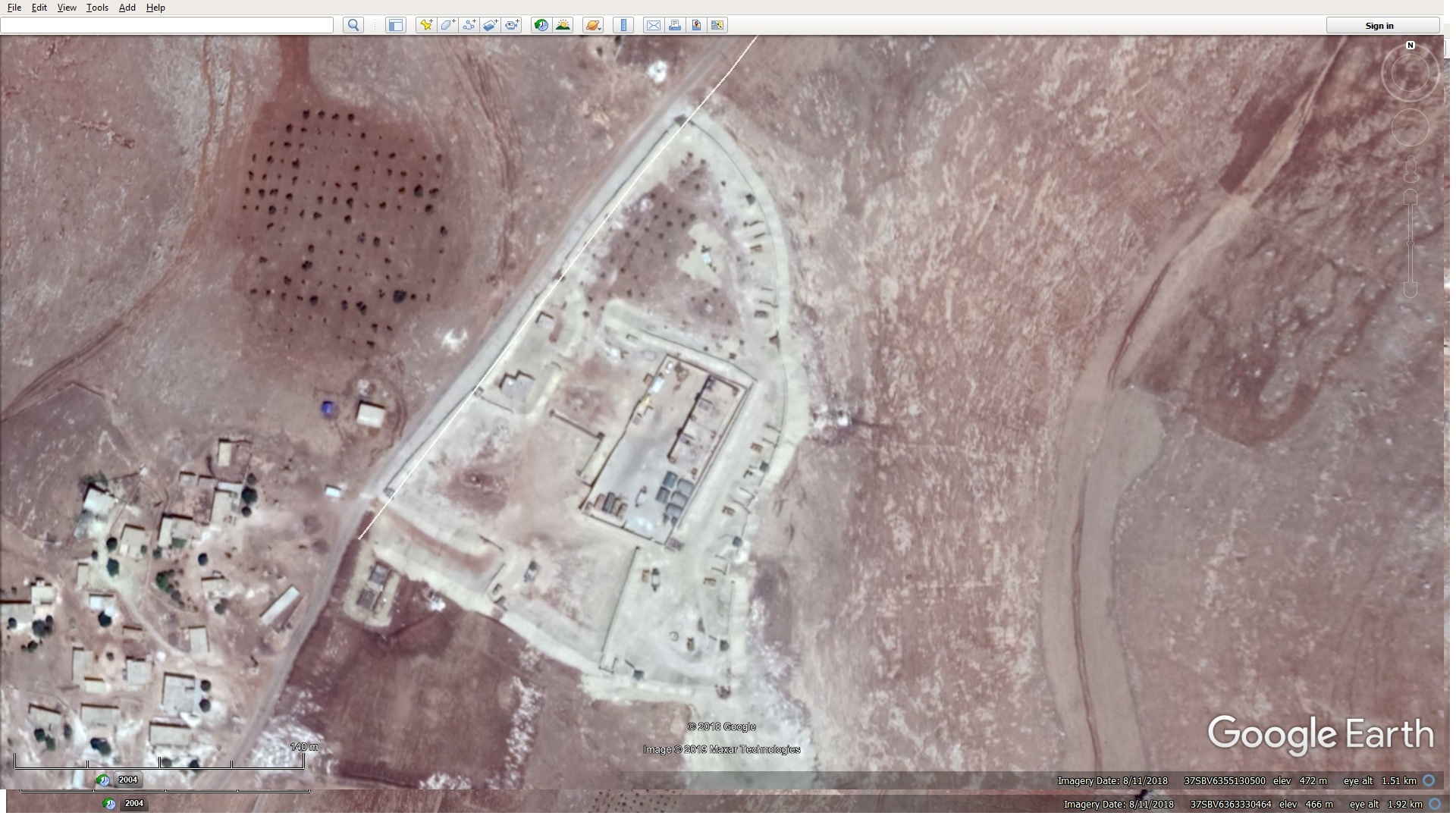 “The country’s Foreign Minister Mevlut Cavusoglu even denied that the post is besieged by the Syrian military”.
………..
LOL, then I wonder what term he’d actually use to describe being surrounded by an overwhelming enemy force that’s camping just outside your gate, I always thought the appropriate word was besieged, I’ll have to go look it up, even a Turk knows the English language better than I do, he must be really clever.

Here’s an interesting article from Turkey I hope the so called moderate opposition [NFL] reads before they launch the next drone or rocket attack against a Russian airbase.
………….

My blood is up too. Chase those Turkeys out of Syria as the hounds chases the foxes. I actually feel sorry for the foxes though.

If I would be SAA, I would shape the demarcation line around this Turkish post in the shape of a pig, that it can be seen on any satellite picture.

Theyre supplying them with kebab.

Syrians don’t need to stop the supply trucks coming in, but considering there are an untold number of western operatives hiding in the compound, Syrians/Russians need to check the outgoing vehicles for surprise passengers. It may be part of the rationale for the OPs was just such a last ditch hideyhole.

Set up toll booth on the road. Charge them both ways. Only allow resupply of food, clothing, etc. No offensive weaponry. Soon the Ottomans will tire of the expense and remove the useless outpost.