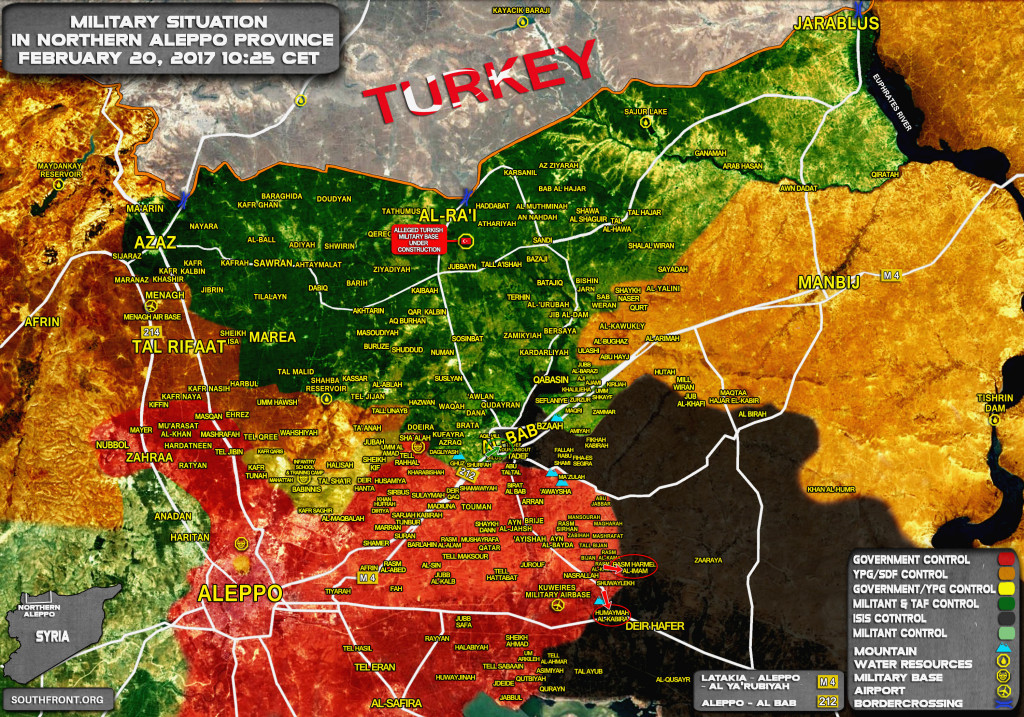 Pro-Turkish militant groups, backed up by the Turkish Army and the Turkish Air Force, relaunched fierce attempts to retake the northern Syrian town of al-Bab from the ISIS terrorist group.

Turkey-led forces recaputred the al-Kaf roundabout, the sports club and the engineering school from ISIS terrorists in the western part of the town and continued their attempts to expand their control amid intense fighting with ISIS. 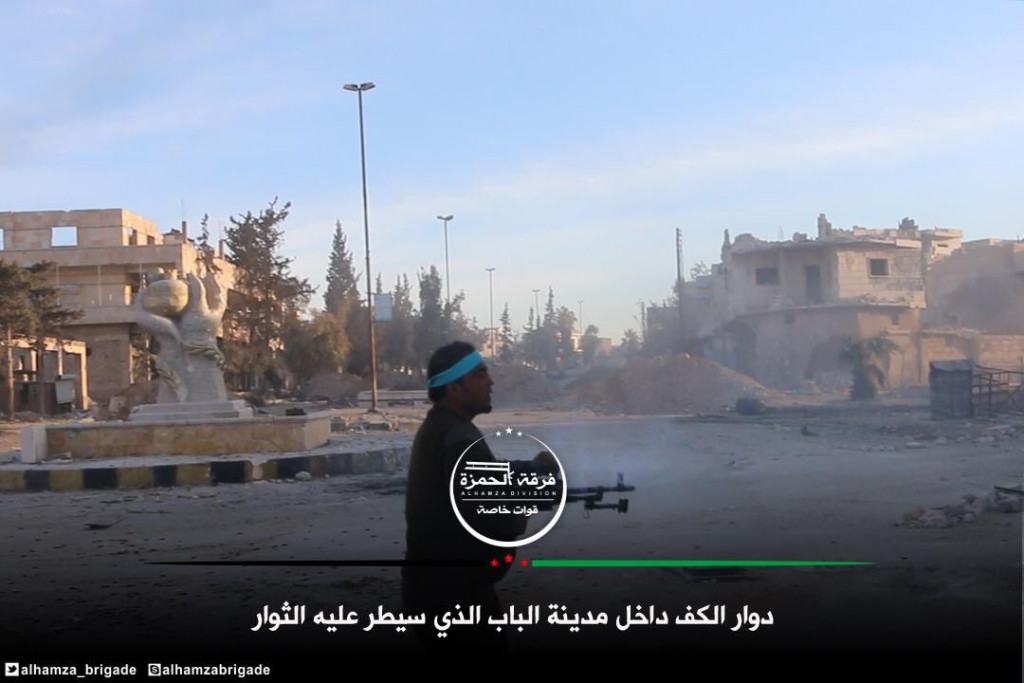 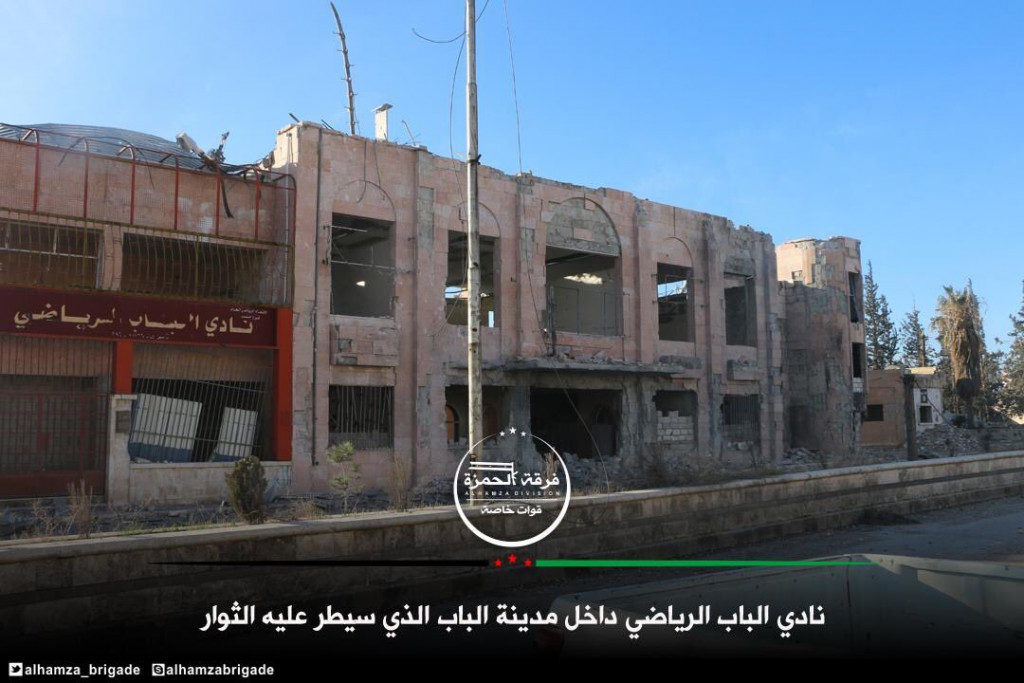 Al Bab will be captured by Turkey.There is no doubt here.The interesting thing is that it is taking a lot of time.Erdogan didnt expect that Al Bab operation will be long.This is big problem for him if he wants to move on Manbij.

Rule 12 of the Evil Overlord list: One of my advisors will be an average five-year-old child. Any flaws in my plan that he is able to spot will be corrected before implementation.

That’s what you get when you are a dictator who purged his own armed forces and whose ego is too big to listen others. Which is why they are surrounded by yes men. The personal reality he has created for himself may not coincide with reality. In this case considerably. This is a problem that all dictators and even democratically elected leaders suffer from. This is why no elected leader should remain in power for more then two terms. Always quit when you’re still ahead or you’ll suffer diminishing returns.

I think the TAF despise Erdogan.Even the people who didnt take part in the coup.

I am literally getting tired of explaining to people that given to the numbers, it is completely expected that liberation of Al-Bab is taking this long.

First of all, Al-Bab is a real stronghold. It’s not a stretched town, rather, its in a square shape. Very easy to defend. On top of that, Tadif, Qabasin and Bzaa are literally castles. Preventing further flanking of the town.

Combine this with the numbers;

Turkey has roughly about 800 SOFs in Syria. This menpower is scattered all around for information gathering. Probably around only 300 to 400 of them are participating in the offensive in Al-Bab.

FSA, already explained that their total menpower for the Al-Bab offensive is between 1.500 – 2.000.

Meanwhile, ISIS had a menpower of almost 2.500.

It is very understandable that such a stronghold, filled with ieds, traps, sudden car bombings, will be liberated very difficultly. Not only ISIS had the upper hand in menpower, they are also in a defensive position as well.

When you consider all of this, looking at the casulty numbers of FSA/TAF and ISIS, TAF is doing an insane job. Total casulty rate in around 350 to 2.500(for the whole operation). And let’s be honest, TAF is not even being very rough to avoid civilian casulties.

For Manbij, obiviously Turkey would not make the offensive with just FSA. They don’t have the menpower.

That’s why, during the Euphrates Shield Operation, a menpower 50.000 strong were deployed to Kilis, for a possible real encounter with PKK militants in and around Manbij. I think Turkey will deploy this menpower, together with hundreds of tanks for Manbij.

So Erdogan is holding back at Al Bab for the grand invasion of Manbij? Don’t you think this action would upset SDF drive on ISUS at Raqqa (thus helping out ISUS)?

First of all, there is no SDF. It’s PKK.

USA should back the legitimate goverment of Syria. Assad. Not some terrorist organisation.

You have, just by the way you comment, defined yourself as a Turk or a wannabee Erdogan supporter.

Your “logic” is flawed. SDF is fighting IS. Turkey attacking Manbij will relieve Raqqah of SDF pressure, therefore is helping IS.

And yeah, sure, let us all help Assad, the killer of his own people.

You numbers as far as TSK is concerned are incomplete, to say the least. You forgot to count the men crewing all the armour around al Bab, hundreds, the artillery, the infantry that has been send to the front as the TSK cannot rely on the rebel rabble. And you forgot to mention the support troops, the cooks, the mechaniciens, the supply troops, medics etc. Standard military doctrine is anywhere between two and four support men for every combat fighter.

For SDF this ratio is much lower as they are not a proper army, they are a well trained militia.

If we go in deeper of military circumstances, can you – or anybody else – answer, if the fighting sides in Syria have the technology of teleportation?

1., How can be possible, that all of the cut off and besiged areas, held by the rebels can survive? They cannot be supplied from air, as they have no airforce and the air is controlled by Russia and the SAA.

2., How can ISIS survive, while they have no more support sources by land (and they have also not air transport possibility) from outside of Sysria and Iraq?

3., How can survive the small besiged area of SAA in the middle of Rebel-held Idlib province?

4., How can SAA-controlled part of Deir-ez-Zor survive so long without an existing air support source (airfield not yet recaptured). There are 100.000 people living there! Thanks in advance for your answers!

These are very good questions. IMOA 1. The “rebel” pockets have been falling. E Aleppo is a good example. They held many small munitions depots. But they lost the city. E Ghouta is next. 2. ISUS territory is their own source of supply. They had captured Syrian weapons depots. Sure that Sauds are supplying modern weapons over porous Jordan/Syrian border (don’t forget about the weapons black market). 3. I have no friking idea, maybe that surrounding rebel force is more moderate, and wants a seat in discussions? 4. Deir Ezzor has held out with air drops of food, munitions, and personnel for quite a while now via Russian cargo drops and hellos. Airfield will be retaken and DAESH back will be broken there.

Syria is a full blown war zone, combination of violence and bribery will get most things anywhere in the militarized provinces – including the military supplies funded by foreign powers. UK and US special forces have long operated, respectively, across the Jordanian and Turkish borders – and they have coordinated and facilitated huge volumes of munitions supplies through these corridors, where deliveries end up is moot point in a militarized environment where strongest force rules.

I do not know, if your explanations are true. But there is one point, which I do not understand, because I see no logic in it: if Turkey has such a strong force at Killis, why do she not use it at Al-Bab? The really weak performance in this city makes a very negative effect on the Turkish military and it is also a morale weakener for the Turkish soldiers (who are probably anyway not very motivated…)