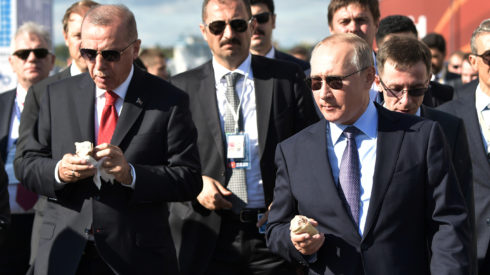 Turkey claimed that it considers illegitimate the elections to the Russian State Duma held on the territory of Crimea. The official statement was made by the Turkish Ministry of Foreign Affairs on September 20, despite the mutual friendly rhetoric of Presidents Putin and Erdogan.

“Turkey continues to support the territorial integrity of Ukraine and considers the annexation of Crimea illegal. Against this background, the State Duma elections held on September 17-19, 2021 in Crimea have no legal force for Turkey, ” the Turkish Foreign Ministry said in a statement.

The elections to the State Duma were held all around Russia, including Crimea, on September 17, 18 and 19. Simultaneously, there were direct elections of the heads of nine entities of the Russian Federation and 39 regional parliaments.

Russian President Vladimir Putin commented on the issue, glorifying his colleague from Ankara:

“He is a man who keeps his word. He “doesn’t wag his tail”. If he believes that it is beneficial for his country, he always comes through,” Vladimir Putin said.

However, the “warm friendship” between the two leaders is not sufficient to solve the mutually exclusive interests of their countries.

Turkey’s policy towards Crimea, the categorical non-recognition of its status ad hoc, is not aimed at supporting the territorial integrity of Ukraine, but aims the independence of Crimea if destructive processes within the Russian Federation occur.

Turkish strategists likely hope to use a possible instability in Russia to turn Crimea into a Turkish vassal state, as it was the case before the Russian Empire imposed its control over Crimea in 1783. The model of satellite territories has been implemented by Turkey since the ancient times, and is still actively used, for example, in Northern Cyprus.

Big words from Erdogollum occupying North Syria, parts of Lybia, half of Ciprus… Crimea has been Russian for 300years with a majority ethnic Russian population. Turks should grow a spine instead of the backstabbing attitude. If it wasn’t for Russia Erdogollum would be beaten by 72 Virginians till ethernity…

The barbaric Turk turds are foaming at the mouth with illusory visions of grandeur. What awaits them however will be a ball-breaking event that’ll leave them in shock and awe and broken to the bones as their Americ*nt masters say. It would be good for Turkish historians to remember the Battle of Famagosta in Cyprus in 1570 when 7,000 Venetians took on a force of 200,000 Turds and killed 80,000 of them. One of the greatest military feats of bravery and defiance of all time.

Dönmeh and Chabadnics are always friendly to each other. Real Turks or real Russians have no say in anything…

“He is a man who keeps his word. He “doesn’t wag his tail”. Oh yea? you mean like he kept his word on the Match 5th agreement with Russia??? Sure, pretend it didn’t happen! LOL Putin adores having Erdogan’s cock explode in his juwish mouth. :P

Play with fire and you will get burnt…

Who the fvck gives a shit what that turk clown thinks about the Russian election?

I don’t and i don’t give a damn what my Government thinks about it.

That picture don’t look like Putin. Maybe one of his doubles?