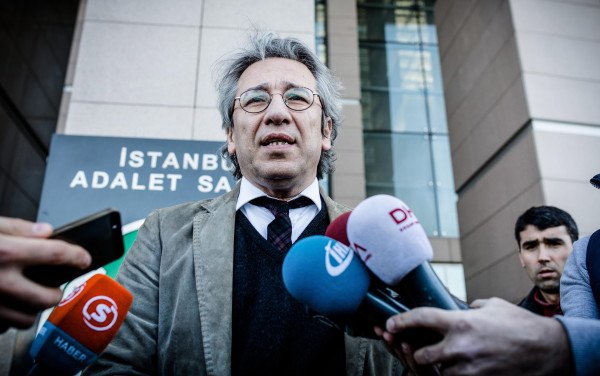 The Turkish public prosecutor demands life sentence for the imprisoned editor in chief of Cumhuriyet because of his anti-government reporting. Even the EU appears to be shocked. Angela Merkel will pay billions to Turkey, for them to keep refugees out of Europe.

The Turkish public prosecutor wants to bring two prominent journalists of the government critical newspaper “Cumhuriyet”, for alleged agitation against the government and support of terrorist organizations, for life into prison. The indictment of the Prosecutor’s Office, responsible for terrorist offenses in Istanbul, is accusing the journalists Can Dündar and Erdem Gul of espionage and an attempted coup against the government, the news agency Dogan reported on Wednesday.

The arrest of the two journalists in November had triggered outrage in Turkey and other countries. Dündar is the chief editor of the anti-government newspaper “Cumhuriyet” and Gül the head of its main office in Ankara. The two journalists, who are in detention while awaiting trial, supposedly have revealed state secrets with reports of arms supplies of the Turkish secret service to the terrorist militia IS in Syria.

Furthermore Dündar and Gül had supported in 2013 the emerging allegations of corruption against the government and thus helped in a coup attempt, the prosecutor argued. Recep Tayyip Erdogan considered the allegations of corruption as part of a conspiracy by the movement of the Islamic preacher Fethullah Gülen against the government, who is an archrival of the head of state.

Erdogan publicly had threatened Dündar would pay for his reports “a high price”, and personally filed a complaint against the journalist. Newspaper articles of the two accused are used in the 473-page indictment as evidence, the pro-government newspaper “Sabah” reported. Thus, Erdogan and intelligence chief Hakan Fidan are named as plaintiffs.

Prosecutors demanding, according to new agency Dogan, to sentence the two journalists to two times life imprisonment and 30 years in prison. One of the life imprisonments should therefore be carried out with a tougher penitentiary system – the harshest punishment in Turkey, usually only imposed only violent crimes such as murder.

The Council of Europe and a number of international journalists’ associations criticized the detentions in the EU candidate country. Dündar accused the EU of ignoring the harassment of the media in Turkey, out of consideration for the desired cooperation of Turkey in the refugee crisis.

On Wednesday EU Enlargement Commissioner Johannes Hahn displayed being “shocked” about the demand of the prosecutor’s office. Equality before the law and proportionality is “a must”, he explained in the short message service Twitter. Turkey must guarantee the “full respect for human rights” during the accession negotiations with the EU.

The journalist organization Reporters Without Borders accused the prosecutors of “cruelty”. Turkeys Representative of the human rights organization Human Rights Watch (HRW), Emma Sinclair Webb, said that Dündar and Gül as journalists “just did their jobs”. Turkish politicians, especially President Erdogan, had in recent years, knowingly created a “climate of fear” and their critics and opponents “demonized”.

Congratulations to the West, US and NATO with such an outstanding ally like Turkey democracy will have a new meaning! Bravo!

Why is the USA not bombing Ankara for being a TERRORIST supporter? Israel murdered eight Turkish citizens and Erdogan did NOTHING. Now Erdogan is trading ISIS oil with Israel in spite of Israeli murder of Muslims. Erdogan is a slave of Israel. Israel and Turkey are buying oil from ISIS: http://www.zerohedge.com/news/2015-11-28/isis-oil-trade-full-frontal-raqqas-rockefellers-bilal-erdogan-krg-crude-and-israel-c http://pennyforyourthoughts2.blogspot.ca/2015/12/israel-buys-most-oil-smuggled-from-isis.html Turkey should be under attack, not Syria.