The Turkish authorities have allowed over 1,000 fully-equipped terrorists to cross the border with Syria’s northwestern Idlib province to join other terrorists in Aleppo. 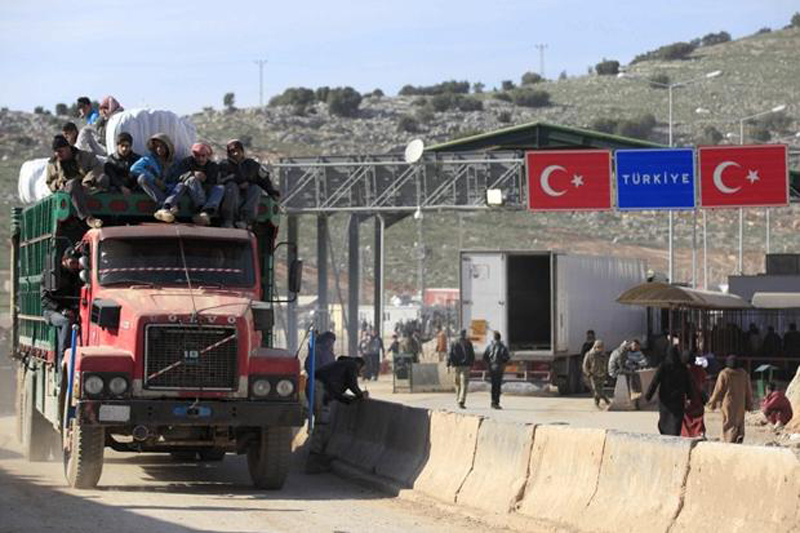 With a permission of the Turkey’s authorities, hundreds of terrorists crossed the Turkish border and came in Syria’s northwestern Idlib province to join other terrorists in Aleppo.

Over 1,000 fully-equipped terrorists arrived in Idlib province to join the Jeish al-Fatah group in the province of Aleppo, as Turkish border guards did not impede border crossing by terrorists, the al-Watan newspaper reported on August 16.

According to al-Watan, the main part of the terrorists was from foreign, in particular Arab, countries.

Informed sources said that terrorists were crossing the border at Bab al-Hawa and Bab al-Salameh and entering northern Idlib at nights.

Heavy attacks against the Syrian army’s positions were launched by hundreds of Jeish al-Fatah terrorists on Sunday evening.

On August 15, sources reported that Jeish al-Fatah commanders have prohibited their coordinators to reveal a real number of casualties in battles in the south part of Aleppo province in order to prevent the terrorists from losing their morale. This order was made after thousands of young terrorists were killed in the Aleppo battlefield, al-Watan reported, citing sources close to the Ahrar al-Sham terrorist group.

On August 3, over 9,000 terrorists were gathered by the Jeish al-Fatah to prevail over the Syrian Army positions and open a way into the militant-held districts in the east parts of the city of Aleppo. However, they failed to do this and had to pull the forces back after the terrorists suffered dozens of casualties.

Many Jeish al-Fatah terrorists were killed after they failed to break through the army strongholds in New Aleppo district. The government defense lines in al-Hamdaniyeh and the box-making plant in the western side of Aleppo and al-Ramousiyeh southwest of the city were also stormed by the Jeish al-Fatah.

According to Syrian and Russian military officials, the terrorists so far suffer losses, at least, there were 5,000 casualties for the last two weeks.

this is a fucking joke

you are a fucking joke

it is funny that you refuse to accept the truth and just want to believe the goat fucking terrorists propaganda…… pathetic imbecile.

Turkey is not to blame. It is Erdogan. The Turkish people got sick and tired of Islamist-Erdogan sending his terrorist into Syria. This policy was almost reversed. But then Russia save NATO-member- Erdogan. And now Syrians pay the price for having an Islamic-dictatorship at the helm in Turkey.

Two weeks ago you where saying the oposite regarding this !! Erdogan was the freedom fighter an Al Assad the bad one !! You are not “Real” nor are you “Anti-Racist”. You are an errand boy, sent by Nazi-Zionista and Saudi Degenerates to confuse, divert and dilute this forum !!

You lie. I have always stated that Turkey works with Zionist and is NATO and works against Syrians. I have been standing beside Assad for 5 years, and every comment reflects this.

Always standing up for whats right consistently, means zionist like yourself are always going to oppose truth.

it is funny that you refuse to accept the truth and want to believe the goat fucking terrorists propaganda….. pathetic imbecile.

make up your mind, CIA goat.

Russia cannot bomb these US/EU/NATO/GCC jihadist head-choppers in Turkey without creating a pretext for a NATO/Russia war. However, once in Syria they are free game for the RF/Syrian Air Force. The RF bombers from the Iranian base will be itching to gives these foreign head-choppers a warm and explosive welcome to Syria. The sign on their bombs should read: “Welcome to Syria, the gateway to 80 virgins!”

Bollocks, Russian airforce did just that before the cease-fire agreements with the “moderate” terrorist scum!

When did the Russian Air Force bomb Turkish territory?

You were writing stupid pro-Erdogan comments on Russia Insider, about how Erdogan has turned against the U.S. and is an ally of Russia now. What happened? Struck on the head by reality at last?

Hey Spunkey! You do realise the difference between Syria and Turkey, don’t you? They are different countries with an INTERNATIONAL border. Or didn’t they teach you in school in the exceptionally violent US, which has no respect for such borders? It is good that Turkey has exported these US/NATO/GCC sponsored head-choppers to Syria where the Russian Air Force and the Syrian Army can give them a chance to meet up with their 80 virgins. Why should Turkish territory suffer such bombing? And Turkey is still a member of NATO, or are they now being expelled for disobedience to the Empire and standing up for their own country? I am not pro-Putin or pro-Erdogan. I am for the freedom and sovereign rights of countries around the world who fall prey to the US/EU/NATO diktats. That is why I voted for Brexit and UK freedom. Have you heard of that or does that not get through in the exceptionally ignorant US? HUNK! HUNK!! HUNK!!!

You didn’t answer my question; instead a lot of meaningless stupid verbiage… Just a few weeks ago, you were writing adoring comments to Erdogan, the “champion of people’s democracy” who was going to become a part of “Russia’s Big Eurasian Axis With Iran Any Day Now” and had “turned against the U.S.”. What happened, genius? Do you admit now that you’re an IGNORANT BLOWHARD who opines without an idea what you’re talking about?

I have no idea what Putin and Erdogan discussed at their meeting, do you? The fact that they met in Moscow after the coup is itself very significant. If you have any brain cells left, can you explain what exactly Turkey and Erdogan gets out of NATO? During the coup two F16 Turkish/NATO jets had Erdogan’s plane in their sights. Now, how much would you love your NATO “allies” after that? http://www.reuters.com/article/us-turkey-security-plot-insight-idUSKCN0ZX0Q9 Did your Obama stand “shoulder to shoulder” with Erdogan after the coup? Wrong side won. eh???

You are an idiot and a waste of time. You evade questions that you cannot answer. Erdogan-loving moron.