The Turkish government opposes an agreement between the Syrian government and the Kurdish-led Syrian Democratic Forces, which have promised to to surrender the western Manbij regions to the Syrian Army. 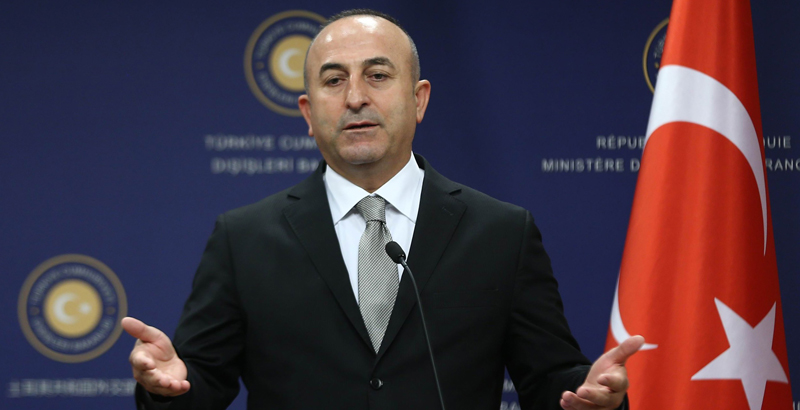 The Turkish government has rejected an agreement, concluded between the Syrian government and Kurds, according to which the latter promised to surrender the western Manbij regions to the Syrian Army, as well as called on the US to immediately withdraw the Kurdish-led Syrian Democratic Forces (SDF) from the city of Manbij, located in Aleppo province, Turkish Foreign Minister Mevlut Cavusoglu said.

Speaking about the Euphrates Shield operation, conducted by the Turkish Army and Turkey-backed Free Syrian Army (FSA) in northern Syria, Cavusoglu told reporters that though the Turkish forces have not yet moved towards Manbij, they are going to start operations in the region in the very near future and attack the SDF in Manbij. The minister pointed out that Ankara doesn’t want Washington to continue to provide support to Kurds, as well as stressed that Turkey has several times warned the US that the Turkish forces would attack the SDF soon.

The Cavusoglu’s warning came after it became known that the Tal Rifaat Military Council announced that it would stop to participate in the Euphrates Shield operation and start to fight against the SDF in northern Aleppo in order to recapture villages, which are under its control.

The Foreign Minister also opposed an agreement between the SDF and Russia, according to which Kurds should hand over villages, located near Manbij and controlled by them, to the Syrian government.

According to the SDF, the measure will be taken in order to maintain the security of civilians, residing in Manbij and its surrounding areas, as well as in regions bordering with al-Bab in the western part of Manbij, and to stop occupation of the Syrian territories by Turkey.

As some reports revealed, the Syrian Army intends to conduct a clean-up operation in the towns of Jubb al-Homam, Jubb al-Sultan, Jubb al-Khafa and al-Za’aroureh, as well as in villages, located to the south of Manbij, in order to strengthen its defense lines and prevent any effort of the Islamic State (IS) terrorist group to bypass the government-held regions.

Cavusoglu expressed his country’s opposition with the agreement between the SDF and the Syrian Army, claiming that “there are all sorts of news and speculation. This is all untrue. We are now seeing that the Syrian government forces are moving to the east.”

In addition, the Turkish Foreign Minister, announced that Ankara and Moscow agreed to prevent clashes between Syrian troops and FSA militants, claiming that both of them pursue the same goal – to eliminate the IS terrorist group. “We have agreed with Russia on the prevention of clashes between the [FSA] and the Syrian government forces in order to intensify the fight against ISIL,” Cavusoglu said on Thursday.

Tough luck Turkey. SYRIA IS NOT YOUR FRICKING TERRITORY!!

Turks are shameless… what a nation of criminals!

Enemies all over. You use the shield to blur 40.000 enemies of the state in Your micky mouse court as well as replacing a goverment wirth a Mursi look a like presidential dictator.

We are entering the final stage of the truth YPG SDF Kurdsh are Syrian citizens and it is their mother land not Turkeys fund mercenary terrorist.

And Barzani is back in Edogans ass again, up to the hipps…

Only last week the Turks were demanding that Arab lands around Manbij should be returned to the Arabs. Well, now they have been. The SAA is in control and still the Turks are unhappy, LOL.

Turky must go back home , immediately. Maybe Russia with a dozen of missiles can help Turky to understand that it is not very wellcome in Syria.

Turkey is going to move on Manbij? What a laugh – look at how rapid their al Bab operation turned out. If their enemy doesn’t just give up and walk away (like in Jarabulus), then the Turks and their head-chopper pals seem to have a particularly difficult time convincing them otherwise.

All I can say is that Turkey better send their remaining cold-war era Leopard 2A4s to Syria if they want Manbij. The Kurds will turn them into scrap metal almost faster than Turkey can deploy them. As for the FSA thugs Turkey uses for their Syrian invasion… well, they won’t last long in Manbij either.

Turkey will also be facing those U.S. Green Berets that have been training the SDF all this time. All I can say to that is two words: radio, B-52. You can probably figure out the rest.

Sultan Ardogan dreaming obout 400 years ago. soon or later we see Turkey will be become like Syria and Iraq.

The clue is in Syria and not in Turkey.