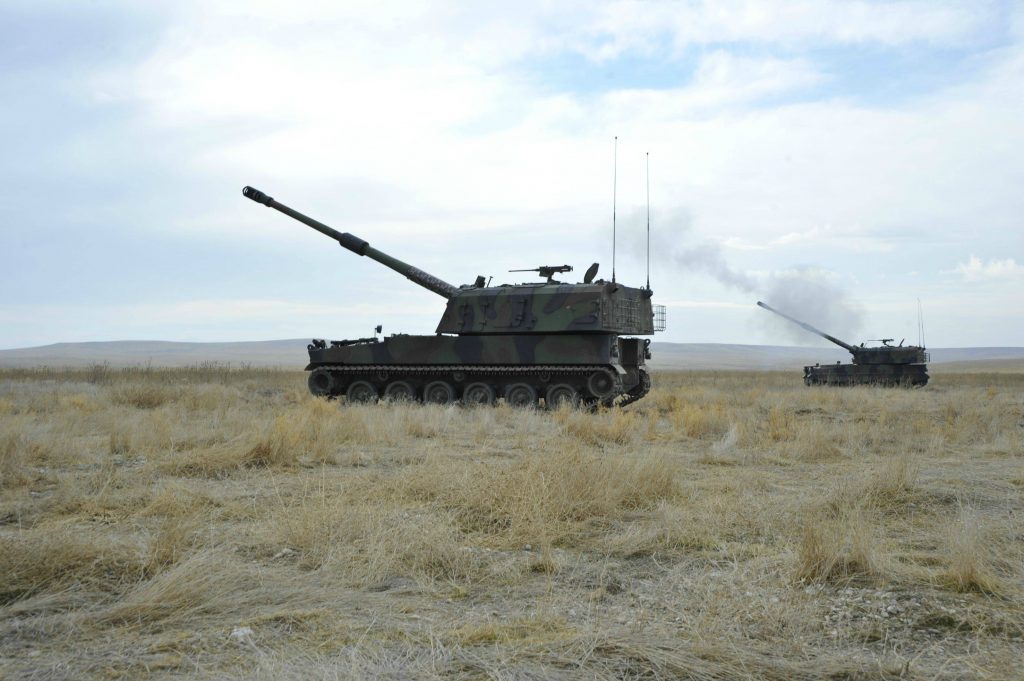 According to multiple pro-Kurdish media outlets, Turkey and pro-Turkish militant groups are preparing for a large advance against Kurdish militias in the area of Afrin.

The Kurdish news agency ANHA argue that Turkish reconnaissance jets are flying  over the village of Sheikh Issa.

However, no large attack has taken place so far.

The SDF media wing has not reacted to the recent shelling, but some unofficial Kurdish sources indicated that the SDF is not going to halt the Raqqah advance even if Ankara launches the expected operation in the Afrin area.

At the same time, other sources threatened that the SDF may halt the Raqqah advance if Turkey attacks Afrin.

They should do this in northern Raqqa, not northern Aleppo.

Erdogan is maybe madman, but is man of action. He did not hesitate deploy troops to Qatar and looks like the hot situation now is coming down between Qatar and Saudi and Saudi alls. This is what we need to stop American aggression

do you think, he will attack them?

i don like the politics of kurds, but i think, turks also should stay at home.

I agree, I didnt mind thé kurds ay first, but once they started licking Saudi arse, that was à huge warning sign for me.

Turks should turn over Northern aleppo to thé SAA eventually, not now, saa needs all their forces for Deir ez zor push.

I hope this Madness Will end this year.

Any areas taken by Erdogan will be given back to the SAA at the same time as Turkey will give back Hatay, that is never. Turkey has installed a governor in Azaz, it is theirs now.

Soon they will invade Idlib and take that too. At the same time, they will try for Afrin but they will fail. FSA will betray them once the losses will grow and within two months, most of the SDF forces around Raqqah will not be necessary anymore and they will be transferred to Manbij to counterattack in case of an TSK invasion.

The Turks appear to be aggressive and just want to be let lease on the kurds anywhere in the world. Believe it or not if you give these lunatics even five minutes they will level Efrin to such state that Raqqah will look like paradise

The Kurds have been double crossed as people were saying in the beginning. They were trying to be wise but it was stupid move regardless for fighting against the revolution. They come of like crapping land both sides of Arabs don’t like them may it be the Assad regime or the rebels. they have been betraying both sides also.

The Kurds are bound to a very very ugly defeat out here. If turkey gets a full green light they might get extinct

Thats thé first relevant comment you posted, thank you, and please continue with constructive comments, makes it fun to Côme out here

But there are many kurds living in Turkey itself. These tensions will probably grow.

Many of those Kurds in Turkey have no love for the PKK/PYD Kurds not even in Syria do the Kurds hold any love for them and they only get treated slightly better by than the Arabs do.

The Americans will not care for Afrin Kurds. And Turk supported FSA will pressure Aleppo itself if the Afrin land is defeated. Raqqa and the eastern Syria is much more important and Erdogan will make Trump a favour in invading west Syria.

For some time now, Kurds have been behaving as if they don’t need any friends from the neighborhood. If this attitude was justified, surely they can polish off a couple Turks in their front yard. If not, there’s always that mirror to take a hard look into.

Maybe with obama and qatars pipeline… However, conditions have radically changed and trump will have very little stomach for continuing support after raqqa, despite what general mcmaster says.

Damascus and Ankara won’t allow a Kurdish state. It’s that simple. It’s gonna be a meat grinder along with Raqqa, the Kurds there are attempting to govern but it seems like a rabble right now incapable of making any lasting impact or forming a government.

This also shows how disconnected from reality western fake news is.

No American jets to shoot the Turkish planes down? America does not truly care if the FSA or the Kurds control Syria as long as it’s not SAA. It could even by ISIS they unofficially wouldn’t care.

Turkey wants to connect the two rebel regions of bab in the north and idlib in the northwest. Afrin is in between.

Turkey may be seeking to only take eastern part of Kurdish territory, like tell rifat, and leave the western half to the afrin Kurds.

The January 2017 Kurdish land grab from afrin towards manbij left them in an indefensible position.

The intelligent thing to do is withdraw. No one feels sorry for greedy people.

It would be easier for the Syrians and Russians to blow the Sultan’s aircraft out of the sky than zionist or the US head-chopping, heart-eating raper air forces and not give American Caesar the pretext he’s looking for to invade.

Interesting developments today : A meeting between FSA leaders and turkish officers, on the subject of attacking kurds, resulted in a big row. Not all of FSA was very keen on attacking kurds.

The leader of the Mutanni group was so fed up with turks, because of his realisation that they only had Ottoman (landgrabbing, expansionist) ideas, that he defected today to SDF. I do not know if he took fighters with him and if he did, will they fight against Turkey?